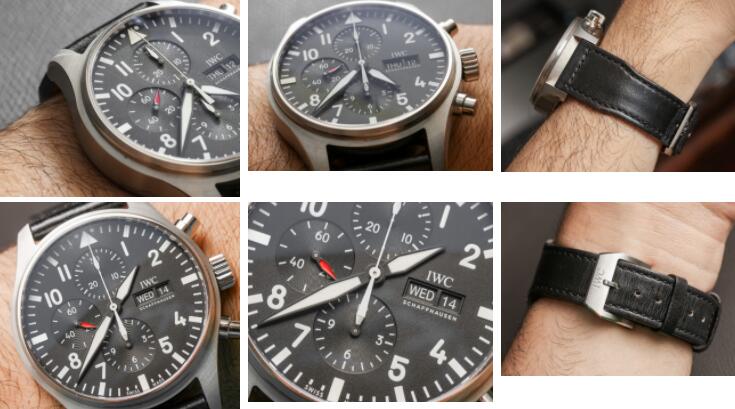 Notice that on the edges of the bracelet you see no holes for pins or screw bars. Pretty cool right? To adjust the bracelet the links use a special “almost no tools” necessary approach where you press down on small pushers on the inside of the bracelet to release the links. It’s a pretty decent system, and OCD people like myself will appreciate how it helps clean up the look of the bracelet from the sides. I also like the small amounts of perlage polishing on the folding elements of the deployant clasp.
Most important for daily wear is the micro-adjust system. While this isn’t new, IWC adopts the technique of putting a small micro-adjust system in the folding deployant clasp. To operate it and extend or shorten the bracelet by a few millimeters you press down on the IWC logo. This makes wearing a bracelet much more comfortable as your wrist sometimes wants it to be more snug, and other times wants it to be a bit looser.
I don’t believe you need to spend terribly high amounts of money to get a good classic sports watch from a Swiss brand – and that is one of the primary reasons this watch is a good idea. IWC is getting a bit more sensible with its prices and the 2016 3777 Pilot’s Watch Chronograph timepieces are an excellent illustration of that.