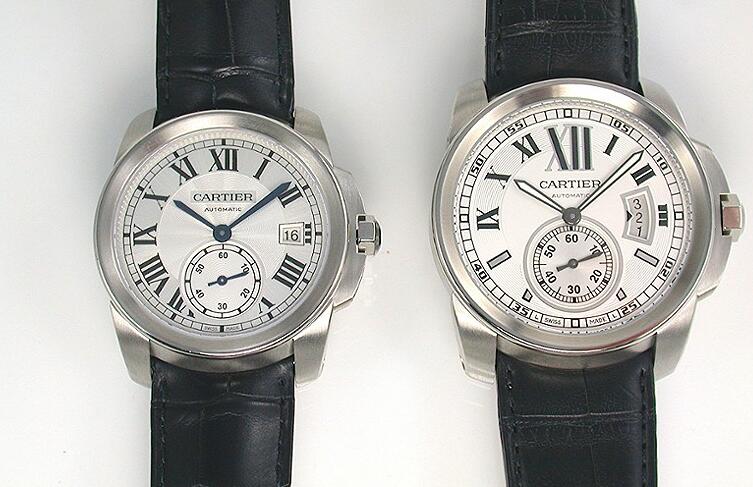 I think of Cartier’s Calibre de Cartier watch as the collection of watches from Cartier, other than the expensive pieces in the Fine Watchmaking family, as being exclusively for men. Born from the start with a masculine presence and size (42 mm), it has expanded in two directions: complicated with a chronograph, and “hardened” with the excellent diver version. I was slightly surprised when I saw a new, smaller version at a retailer recently.
The diameter of the Cartier’s Calibre de Cartier watch 38 is reduced 4 mm from the original, which doesn’t sound like much but visually is quite dramatic. The movement is the same in-house caliber 1904 MC as in the original model, and it is also visible through the sapphire case back.
This gives it the effect of being thick and chunky, not unlike a 40 mm Panerai Luminor compared to a 44 mm model with the same thickness.

The major changes with the Calibre 38 compared with the 42 is with the dial. The new design tones down some of the bolder strokes that are present in the 42. The Roman numbers are uniform in size (no outsize XII as in the 42), and they continue all the way around the dial, not switching “California-style” to index markers below the 9-3 axis. Also, there is no luminous material on the dial or hands, rather, they are classic Cartier blued steel.Another dramatic change is the use of a single date aperture at 3 o’clock, rather than the elongated 3 date aperture on the 42. (A good design decision, otherwise the aperture would take up too much real estate on this smaller dial, messing up the proportions.)
In general, the Cartier’s Calibre de Cartier watch 38 is more classical Cartier in spirit than the Calibre 42, which I can see appealing to some people who appreciate those aspects of Cartier, though there is something about the boldness of the original Calibre that breaks away from past Cartier efforts and is something that I find appealing, beyond my preference for its larger size.

While still marketed to men, I wonder if Cartier might be seeking out a female audience with the Calibre 38. I’d like to hear feedback on this front from both the male and female readers.