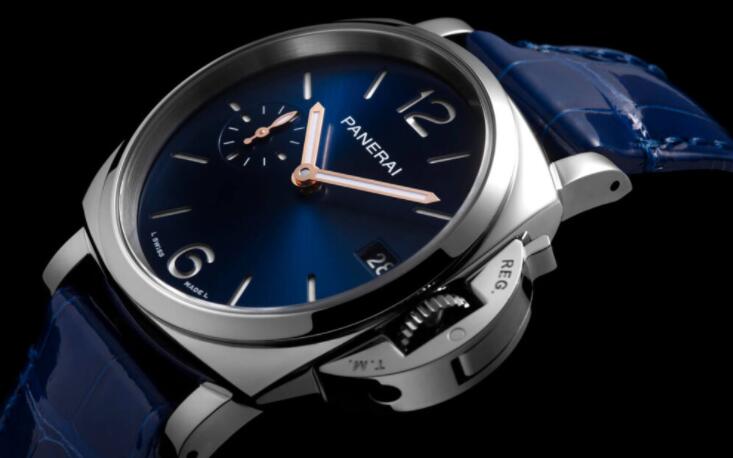 The Panerai Piccolo Due PAM01273 and the Panerai Luminor Due PAM01274 are the latest additions to the Manufacture’s collection. Both models share much in common, including bewitching blue dials. The only aspect which differentiates the two models is the size of their cases, 38mm and 42mm. The brand has marketed the watches as ‘his and hers’, however, Angus Davies urges readers to set aside any gender stereotypes and view each option with an open mind.
Most watch brands try to establish the identity of their audience. Based on their findings, the products may well embrace a specific design language, materials, complications and other specification highlights. Finally, the company’s marketing team will often choose the most appropriate means of promotion. This will include selecting model names, brand ambassadors and even the symbolism and vocabulary used for promotional materials and press releases.

For many years, Panerai could be summed up with the following words or phrases; ‘masculine’, ‘historical’, ‘divers’ watches’, ‘luminescence’, ‘Florence’ and the ‘Royal Italian Navy’. The character of the Swiss-Italian brand has always been clearly defined.
In 2016, Panerai unveiled a new family of models, the Luminor Due Collection. Housed in a 38mm case, the Due was significantly smaller than both the existing Radiomir and Luminor models. However, to the casual observer, the Due looked near identical to the brand’s regular Luminor timepieces. Indeed, the cushion shape case, safety lock crown protection device, sandwich dial and small seconds display at 9 o’clock were all elements shared in common with regular Luminor models.
The main difference between those models in the Due Collection and the regular Luminor models is they encompass a differently styled case. Indeed, at the time of launch, the case of the Due model was approximately 40% slimmer than a standard Luminor watch. With the advent of the Due, the brand attracted a new audience, perhaps including some individuals that were hitherto put off by the über robustness of regular Luminor models. The Due has a water resistance of 3 ATM (30m) compared to regular Luminor models with 100m, sometimes 300m, water resistance. For many potential clients, the slenderness of the Due is probably a greater priority than the watch’s deepsea-diving capabilities. The Due Collection also includes a number of dressy strap options and feminine dial hues, augmenting its overall appeal.

Now, the Manufacture based in Neuchâtel has unveiled two new Due models, the Panerai Piccolo Due PAM01273, measuring 38mm in diameter, and the Panerai Luminor Due PAM01274, featuring a 42mm case. Save for the difference in size, both watches are near identical. They are both equipped with a bewitching blue sun-brushed dial, luminescent golden hands, a polished steel case and the P.900 calibre.
The brand’s press release markets the watches as ‘his and hers’, a strategy that has been applied on many occasions. However, as a former marketing professional, I would never imply that a 38mm or 42mm case is gender-specific. There are many men who will love the neat proportions of the Panerai Piccolo Due PAM01273. Likewise, I have also seen many women wearing a Luminor in a 40mm case, affixed with a brightly coloured strap.

My point is, never think of a Panerai as a man’s watch or a woman’s watch. Instead, consider a Panerai as an effortlessly stylish timepiece that is highly legible and beautifully made that promises lasting eye-appeal.