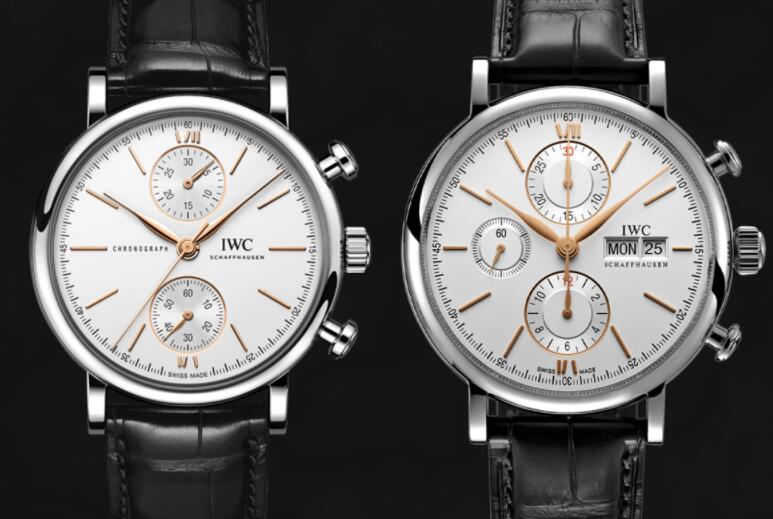 IWC just released three new versions of their dressy, yet somehow also laid back, Portofino Chronograph! I’ve long been a big fan of IWC’s Portofino collection, one which has been somewhat disappointingly overshadowed by the iconic Portuguese and Pilot’s Watch collections. I’ve always found the style of these watches to be beautiful, yet unpretentious, and perhaps the most versatile available from IWC. Those good looks are definitely apparent in these new chronograph models, all three of which are, to my eyes anyway, more attractive than their existing 42mm counterparts.
Here’s a comparison between the new 39mm and the existing 42mm model (not to scale). The Portofino style, with haphazardly bisected Roman numerals, a plated silver dial, and tasteful gold accents, is very clearly shared between them. They’re both gorgeous, classical designs, but the new 39mm is, in my view, better because it’s missing several elements. Specifically, the 39mm model drops the day and date complications, and it relocates the seconds subdial from 9:00 to 6:00, omitting the hour register entirely. In exchange, the wearer receives a far cleaner, dressier dial that better suits the Portofino’s character. I will admit that I do like the raised areas at the center of each subdial in the 42mm model, however; it’d be nice if they could have kept that on the smaller one.
All of the new IWC Portofino Chronographs look better, at least to me, but to a lot of people the most interesting aspect of the 39mm version is the addition of a green dial with matching green strap. Every brand is focusing on green dials recently, but IWC has done an exceptionally good job here. It’s a dark green sunburst, which in some photos, at least in the darker areas of the dial, appears to be a forest green. In others, however, it can take on a more olive tone. That’s one of the big advantages to using a sunburst dial with a bold color; you usually get to explore a wider portion of the spectrum than a matte dial.
Of course, if you’re not a fan of green dials, there are two others to choose from, including this nice black sunburst dial, the IW391404. Like the silver dial, it features high-contrast gold hands and hour markers, which give the dial a touch of color and improve legibility.
I, however, being a boring person, much prefer the more traditional silver dial with gold accents, which is quite beautiful. I love IWC’s silver dials, which have a certain austere subtlety to them. That said, across all three of these, and many other Portofinos, they commit the sin of cutting off numerals. In my opinion, it would be better to just have a partial index at 6:00 and 12:00, even though Portofino is the Roman numeral collection (as opposed to the Arabic numeral Portuguese models), but perhaps this is simply another element of Portofino’s carefree aesthetic.
Naturally, we can’t really have a complete discussion about the IWC Portofino Chronograph 39 without discussing that 39 part, the smaller case. Down from 42mm, each watch is more versatile for everyday wear than its larger counterpart. I think most people will be better served by the 39mm size than the 42mm version, although those with larger wrists may yet prefer the original. I tend to think going smaller is better with a dressy, reserved design like the Portofino’s. Right now, all three models are exclusively in steel, but I’d be surprised if we don’t see a gold version in the next couple of years.
I wish I could show you the movement, but it’s covered by a steel back anyway. If it had a sapphire back, what you’d find is the 79350 automatic, an IWC-revised version of the famed Valjoux 7750, probably the most widely-used Swiss chronograph movement of all time. It’s not a particularly interesting movement, so those looking to expand their horological horizons may not find it uniquely appealing, but there are few, if any, chronographs as widely respected for their reliability and toughness as the 7750 (IWC version or otherwise).
It’s priced better than its 42mm predecessor as well. All three models are $5,900, compared to $6,100 for the 42mm model. It’s not a huge difference, but given that I think that these are better looking anyway, it’s a nice bonus. You can pre-order all of them here at Timeless with the links below, and keep in mind that all Timeless pre-orders receive our special 10-year warranty.
IWC’s undisputed biggest news of 2021 was its launch, during Watches & Wonders, of the BP43, a more modestly sized iteration of its iconic and famously huge Big Pilot’s Watch. More recently, the Schaffhausen-based manufacture has opted to continue the downsizing trend with three new models in its elegant Portofino collection, the first IWC Portofino Chronographs to come in a new reduced case diameter of 39 mm.