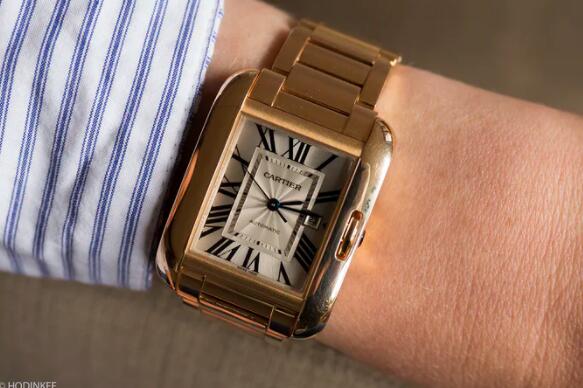 The Cartier Tank Anglaise 29.8 is one of the most recognizable watch designs of all time. With the classic, linear design, the Tank never goes out of favor. Today I am going to review the Tank Anglaise, the latest addition to the Tank family, which is an updated version of the classic.

First, a little background on the Cartier Tank. The prototype for the Cartier Tank was designed during the First World War in 1917 by Louis Cartier, with the watch breaking onto the market in 1919. The industrial design was inspired by the horizontal section of the Renault tank. It is traditionally thought that, the prototype was given in 1918 to General John Joseph Pershing who was the commanding officer of the American Expeditionary Force in Europe. Sadly, the prototype has since disappeared, but I hope that one day it will come up at auction (seriously, how cool would that be?).
Over the past century, the Tank has evolved into many different forms and a number of lines of the original version were born from the initial design. However, Cartier has maintained the integrity of the design with each collection, which (in my opinion) makes this watch one of the most appealing watches on the market today. Although a lot of the modern versions use a quartz movement, even the biggest technical watch enthusiasts can’t deny the Tank’s appeal.
The Tank Anglaise is the latest line of the Cartier Tank Collection with both men’s and women’s watches. It was released in 2012, and the Tank Anglaise comes in a range of metals and sizes, as well as movements. The Anglaise, like the Americaine and Française before it, is an refreshed version of the original Tank watch. It is much bolder, which seems to be the trend these days at Cartier with the Clé de Cartier and Ronde “Croisiere” Cruise Collection (to name a couple) launched earlier this year. The Anglaise differs mainly in the curvilinear case and special crown design. The case measures 39.2 mm x 29.8 mm with a thickness of 9.5 mm and sits nicely on my wrist. The updated case features an ergonomic design that softens the overall look and feel of the watch, moving away from the rectilinear Art Deco roots of the original Tank. This design is definitely untraditional, but it is certainly a fresh one.
The other major change in the design of this watch is the enclosed crown within the bezel and band. The nine-sided crown is still set with a sapphire, however it is now a table-cut stone as opposed to the classic cabochon usually used in Cartier wristwatches. Additionally, the crown is set within the band and bezel, creating a sort of cage-like contraption that holds the crown. This element is an unusual characteristic that you don’t often see used in watch design. There is a recess in the case flank that allows you to pull out the crown, which is then operated from the enclosed, nine-sided outer ring. It’s an unusual system but one well within the Cartier philosophy of combining a technical feature with aesthetics and playfulness.
The dial is the most traditional part of the watch design, with the silvered guilloché dial with Roman numerals and secret signature, and there are the familiar Tank sword hands in blued steel. The only criticism of the watch that I have is that the date is too small to read and is disproportionate to the rest of the dial given the size of the watch.
The Tank Anglaise is available with an automatic movement or a quartz movement. The automatic ETA movement, used in the large model seen here, runs well. However, it should be noted that the XL model features the in-house Cartier 1904MC automatic movement. This is a relatively new trend with Cartier, so hopefully this will be the case for the next generation of Tank watches (maybe for the 100th anniversary in 2017?).

Overall, this is an exciting collection and it really emphasizes Cartier’s ability to maintain a classic but innovative aesthetic. For more information, please visit the Cartier website.