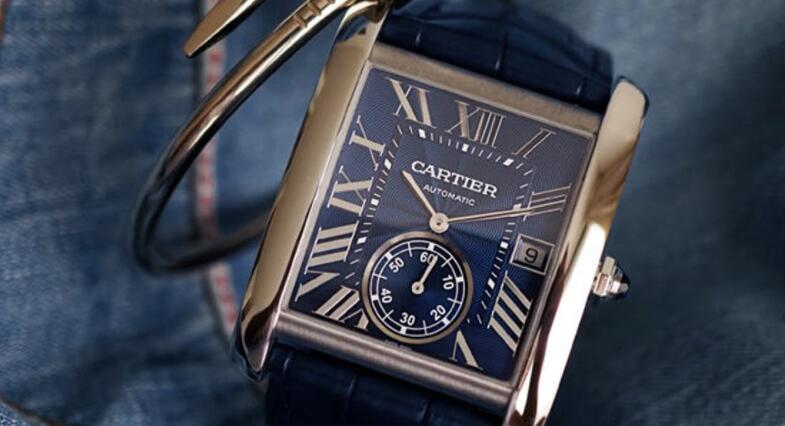 Last month Cartier presented the new ‘Ronde Cruise Collection’ in the US, the new sporty watch for the man on the hunt, for a not too classic looking watch, with a more sporty look. The watch will be on the market in the rest of the world, this Autumn. But the ‘Ronde Cruise Collection’, that was presented in three different versions, was not the only thing ‘La Maison’ had in reserve.

Surprise number two this Summer, is the new Cartier Tank MC 34.3 Chronograph, that arrived quite unexpectedly in the Boutiques last week, with a stunning dark blue guilloche dial!
Yes Cartier, famous for its off white or creamy guilloche dials, is back with another watch, with a coloured dial, a feature that the brand offers just once in a while. Famous was the salmon dial of the Santos Dumont, made for its 90th anniversary, the Tortue Mono Poussoir, made for the 150th anniversary of the brand, the various limited editions, that were produced for Japan, the chocolate Santos Dumont and Tank Louis Cartier of a couple of years ago and there are some blue-, grey- and chocolate dials in the current Rotonde collection, just to name a few.
I have always been a sucker for colour faceplates and welcome this new model with open arms. The readability of dark coloured dials however, is usually somewhat less, than a classic white dial with blued hands. And so is this new Tank MC, but in return the watch stands out from the crowd and is a great looker. I have seen the watch outside the Cartier boutique during the day, evening and with artificial light and the reading is quite good, the dial varies in colour, depending on the light, form dark blue, to a more bright blue, to sometimes a more grey blue.
The applied numbers are polished steel, as are the hands. Cartier delivers this Tank MC on a nice blue alligator strap, what certainly makes a great and tasteful combination. But I would not be surprised that a dark green or dark red strap, would be a daring match too. All depends on your personal style and of course how funky you want it to be.The first Tank MC was released in 2013, just a year after the launch of the Tank Anglaise series and the model is available, in one size, 44 x 34,3 mm to be more precise. It comes in steel or in pink gold, with a cream guilloche-, a black guilloche- and since this month, with this rich dark blue guilloche dial.

Next to the time-only model, there is also the Cartier Tank MC 34.3 Chronograph version, but that is another story. The Tank MC is, like so many mens watches, also seen on ladies wrists as well, but in fact it really is a mens watch, in all respect. The lines of the case, the crown, the back of the case with the Geneva stripes around the movement, all breath a certain masculinity and robustness.
All versions of the Tank MC come on an alligator straps with a folding clasp, that’s adjustable on two sides and are fitted with the well known automatic 1904MC-PS caliber. (Manufacture Cartier – Petite seconde) developed by Cartier and build completely in house.

The 1904MC movement became the foundation for other calibers like the 1904-CH MC, that powers for instance the Cartier Tank MC 34.3 Chronograph and for the 9914MC caliber, that was used for the Tortue Multiple Timezone watch. The 1904 MC proved to be a strong workhorse since it is in use with the Calibre de Cartier watch since 2010. Water resistance is 30 meters and the power reserve is up to 48 hours.

This blue version, that will set you back about Euro 6750.- adds something special and is definitely worth checking out, even if you’re not in the market for a new acquisition; A blue dialed Cartier Tank, doesn’t come by every day.
I would like to thank the Amsterdam Boutique for giving me so much time to photograph this watch.