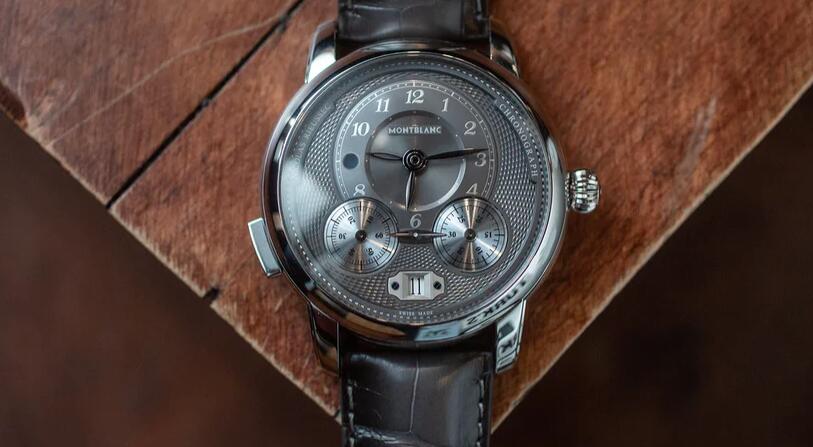 Refreshed from 2008 and originally shown at SIHH in January of this year, Montblanc’s Star Legacy Nicolas Rieussec Chronograph is an impressive feat of watchmaking and design. As part of a recent preview for SIHH 2019, Montblanc has created two new versions of this lovely yet oddball monopusher chronograph. Now offered with an anthracite dial in either rose gold or steel, these two versions sit alongside last year’s model, which was shown in steel with a silver-white dial.
While the Star Legacy Nicolas Rieussec Chronograph may not be my usual cup of tea (does this Casio come in gold?), it is nothing short of special. An automatic monopusher chronograph with a column wheel, the in-house MB R200 movement also shows the time, a second time zone, day/night indication for travel, and the date. The chronograph measure is displayed on two rotating disks set into the wonderfully finished dial. The anthracite dial works really well, with good legibility and the “fixed double index” (the chronograph measure is indicated by the tiny bridge that spans the edge of the two discs) makes reading the chronograph simple enough while ensuring the functionality is as elegant as possible.

Montblanc is a pioneer in the art of writing instruments since 1906. Their Meisterstück fountain pens are emblematic for the beauty and quality. It is said that every person, man or woman, should have one: inherited, received as a gift or acquisitioned. Having in mind the various collaborations and special edition, Montblanc has a powerful and solid reputation in the world of writing instruments. At the same time, Montblanc becomes, more and more, a big, reputable name in the horological world. The recent 1858 Chronograph Tachymeter LE, in bronze, brings the heritage of Minerva, with a vintage appearance and a beautifully designed movement into a modern time telling machine. Another interesting piece from the Le Locle Maison was the Tourbillon Cylindrique Geosphères Vasco da Gama. With a tourbillon placed at 12 o’clock and the world, divided in two on the dial, the watch is spectacular.