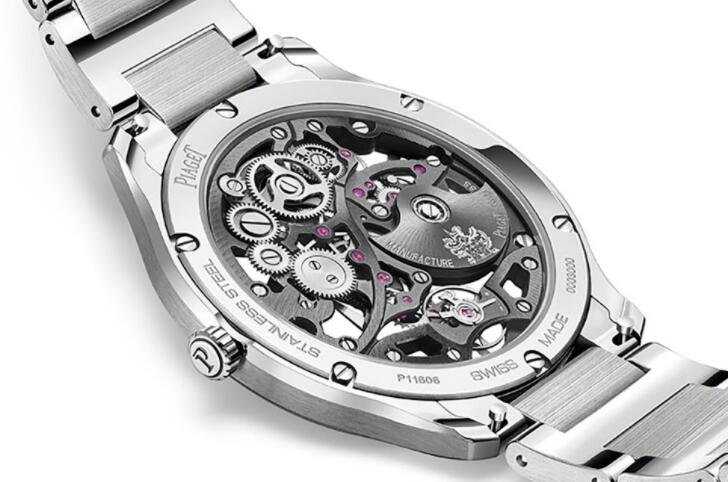 Piaget’s new Polo Skeleton sees the brand double down on its steel sports watch with the first major development for the collection since it introduced a chronograph into the line nearly four years ago.

Using Piaget’s 1200S ultra-thin, skeletonized automatic movement (which at just 2.35mm thick is one of the thinnest automatic movements in the world) has allowed the brand to house it in a new version of the Polo’s 42mm case which is 6.5mm from front to back and around 30% thinner than previous references.

The new thinner case allows the Polo Skeleton to sit much flatter on the wrist, not only making it more comfortable to wear but also making for a more subtle silhouette than its diameter might suggest.

Two references are being released with the option of movements in either blue or anthracite PVD coatings. The open-work design of the 1200S movement reveals much of the movement’s inner workings including the balance, escape wheel, mainspring barrel and platinum micro rotor.

The Piaget Polo Skeleton, which features a quick change system for both steel bracelet and alligator straps, is out today priced at $34,300 USD (£26,500 GBP).

Discover the distinctive character of the Replica Piaget Polo Skeleton and its unprecedented elegance in two styles: one in Piaget Blue and the other in a slate gray finish. The new Piaget Polo Skeleton is available in two highly individual designs – the first with a movement in Piaget Blue PVD, the second in a slate gray finish.
The first Piaget skeleton watches were created in the 1970s and, since then, the brand has developed considerable skills and experience in the art of skeletonisation.

Piaget’s latest effort in skeleton watch making produced the new Polo Skeleton, a model that maintains the key elements of the Polo, such as the curved case surmounted by a round bezel and the cushion-shaped dial opening, but in a case that is 30 percent thinner than existing versions.
The result was possible thanks to the manufacture 1200S1 self-winding movement which is a wafer-like 2.4 mm thin. Beating at the frequency of 3 Hz (21,600 vibrations per hour), it offers a power reserve of 44 hours. The off-centre micro rotor in platinum is engraved with Piaget coat of arms.
The new Piaget Polo Skeleton is available in two variations: one with a movement in Piaget Blue PVD (ref. G0A45004), the second in a slate gray finish (ref. G0A45001). Water resistant up to a pressure of 3 ATM (approximately 30 metres / 100 feet), the new model comes with a polished and satin-finished ‘H’ design integrated bracelet as well as with an interchangeable leather strap for added versatility.