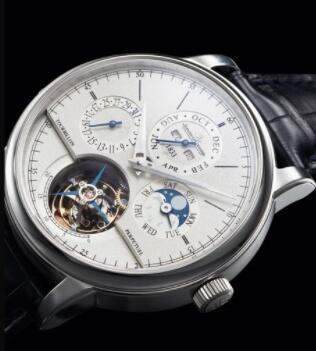 Jaeger-LeCoultre
180 years dedicated to the quest for excellence

Since 1833, creation by Jaeger-LeCoultre have been laying milestones in the history of Fine Watchmaking. Born in the Vallée de Joux, these unique creations encapsulate the expertise of the men and women of the Manufacture, guided by the enduring quest for excellence, perpetual inventiveness, a willingness to question its fundamentals and a desire to rise to the wildest challenges. Each of the 400 patents and the 1,242 calibres bearing the Jaeger-LeCoultre signature are a reminder of their passion for quality and innovation. The Jubilée “Hommage à Antoine LeCoultre” collection is inspired by 180 years of enthusiasm, obstinacy and precision. In a word, the creative force of Antoine LeCoultre.

Since 1833, in the Vallée de Joux, the men and women of the Grande Maison have focused on the constant pursuit of perfection. They perpetuate the values of authenticity, know-how and refinement cherished by the founder Antoine LeCoultre, to whom the Jubilée “Hommage à Antoine LeCoultre” collection is dedicated. In creating the small workshop that was to become the Manufacture Jaeger-LeCoultre, this outstanding individual gave rise to one of the finest watch brands. He devoted his life to the quest for absolute reliability. His achievements in the field of precision and mechanisation contributed to making his valley the acknowledged haven of beautiful horological complications and fine craftsmanship.

Uniting the various professions under one roof
It is from this longstanding experience that the men and women of Jaeger-LeCoultre now draw their inventive capacity. Building on a watchmaking culture rooted in the distant past yet resolutely geared towards the future, they have succeeded in uniting under a single roof the full range of talents and competencies required to create Haute Horlogerie watches. This manufacturing facility is unique in the world and constitutes a spectacular demonstration of the constant quality of their iconic creations, through the bringing together of 180 skills required to make each timepiece in its entirety. Guided and inspired, as ever, by the Antoine LeCoultre’s philosophy of perserverance in seeking constant improvement.

A collection unique in the world
A watch by Jaeger-LeCoultre crystallises high standards, a classicism that remains profoundly attached to the past and concerned with authenticity, while also driven by a conquering spirit and a perpetual quest for the finest horological inventions.

The current creations are a natural extension of the historical models and represent the culmination of the same research endeavours in both technical and aesthetic fields. From the Reverso line to Hybris Mechanica, along with the Duomètre, Rendez-vous, Master Compressor, AMVOX, Haute Joaillerie and even the Atmos, all are governed by the same horological and artistic dynamic. All these models have gained iconic status while continuing to look resolutely to the future.

180 years and the promise of countless successes still to come This future is inextricably bound up with the watchmaking skills and the passion that have been driving the men and women of the Manufacture Jaeger-LeCoultre since 1833. The Grande Maison in the Vallée de Joux constantly reinvents itself while maintaining its original identity. The Jubilée “Hommage à Antoine LeCoultre” collection is a concentrated blend, expressed through every single detail of its lines and its finishing, of a heritage enriched by 180 years of horological expertise.

By the end of the 19th century, there were already 170 complicated calibres created by Jaeger-LeCoultre. In this respect, the link between the historical complications and the limited series created for Jaeger-LeCoultre’s 180th anniversary lies in the idea of efforts expended to reach new heights. Tradition is perpetuated and constantly improved.

The very fact that Jaeger-LeCoultre is treating itself for its 180th birthday to a bouquet of horological revelations is a means of demonstrating that its future lies ahead of it. It is also a celebration of its founder to whom it dedicates its Jubilée “Hommage à Antoine LeCoultre” collection.

Like the new Jaeger-LeCoultre Boutique on the Place Vendôme in Paris, the Jubilée “Hommage à Antoine LeCoultre” collection celebrates the brand’s 180 years while opening up whole new vistas. The history of Jaeger-LeCoultre has been consistently punctuated by significant landmarks – of which 2013 will undoubtedly be yet another.

The creation of this model is a dizzying feat that sets a connoisseur’s heart beating as fast as its mechanism. Inspired by its 19th century perpetual calendars, Jaeger-LeCoultre launches one of its finest complications within the Master Grande Tradition line: the Master Grande Tradition Tourbillon Cylindrique à Quantième Perpétuel. Dedicated to collectors and devotees of the watchmaking art, it pays tribute to Antoine LeCoultre and to the 180 years of the Manufacture by brilliantly rising to an authentic mechanical feat.

Right from its founding, Jaeger-LeCoultre began pushing the boundaries of the watchmaking art with the advent of pocket-watches featuring elegant finishing and top-flight mechanical substance. Their vocation was to write new pages in the history of complications and in the quest for ultimate precision and reliability. Reflecting the inventive spirit of Antoine LeCoultre, these models explored uncharted territory in developing prestigious movements. The Master Grande Tradition Tourbillon Cylindrique à Quantième Perpétuel Jubilee unswervingly pursues the same path with its pure aesthetic and its watchmaking heart endowed with the latest technologies developed by Jaeger-LeCoultre with a constantly renewed purpose: giving a sense of performance to watchmaking tradition.

The latest creation from the Manufacture opts for a movement which single-handedly embodies a miniature watchmaking revolution: the new automatic winding mechanical movement, Jaeger-LeCoultre Calibre 985, of which the tourbillon – equipped with a cylindrical balance-spring – puts on a spectacular watchmaking performance.

The watch, equipped with a flying (or cantilevered) tourbillon and a perpetual calendar, has been created in complete respect for the noblest watchmaking traditions and is in tune with the quest for absolute precision treasured by the founder of the Manufacture Jaeger-LeCoultre.

Within a large 42 mm case, Jaeger-LeCoultre Calibre 985 beats to the rhythm of a flying tourbillon and is equipped with a cylindrical balance-spring, forming an ensemble guaranteeing exceptional precision timing performances. The tourbillon is a major feat in itself. Its grade 5 titanium carriage, its large 14-carat balance and its cylindrical balance-spring developed by Jaeger-LeCoultre create an impression of levitation: the tourbillon appears to be suspended in mid-air at the heart of the movement. The perpetual calendar provides a crystal-clear display of the day, date, month and year, alongside with the moon phases; while the daring small seconds counts off precious moments above the flying tourbillon.

In terms of aesthetics, the Jaeger-Lecoultre Master Grande Tradition Cylindrique à Quantième Perpétuel features the perfect balance between classicism, purity and relevance – a means of associating its historical origins with elegant modernity.

Its new extra-white platinum case pays tribute to the 19th century and draws inspiration from the style codes characterising pocket-watches. Its array of design details reflects these same codes: hour-markers, a traditional minute circle, and a silver-toned grained dial finish. The superbly understated new “dauphine” hands make a perfect match with the classic nature of the model.

The sapphire crystal serves to admire the hand-crafted decorations reflecting a profound respect for traditional watchmaking. The 22-carat gold oscillating weight bears a reproduction of the gold medal that Jaeger-LeCoultre won at the 1889 Paris Universal Exposition in recognition of its horological expertise and its spirit of invention. The equally visible cylindrical balance-spring of the flying tourbillon also serves as a reminder of the extent to which the horological complications featured in the timepiece appear to be moving in an entirely different sphere.

The idea of housing a flying tourbillon and a perpetual calendar within the case of the Master Grande Tradition collection represents an extremely tricky balancing act. No other showcase could have been better suited to pay homage both to Fine Watchmaking and to one of its illustrious exponents, Antoine LeCoultre. With the Master Grande Tradition Cylindrique à Quantième Perpétuel Jubilee, Jaeger-LeCoultre reflects the inventive spirit that has characterised since its founding and highlights the perpetual quest for ultimate performance. Issued in an 180-piece limited series, the watch with its aesthetic historical inspiration endowed with the latest technological breakthroughs daringly celebrates the 180 years of Jaeger-LeCoultre history.