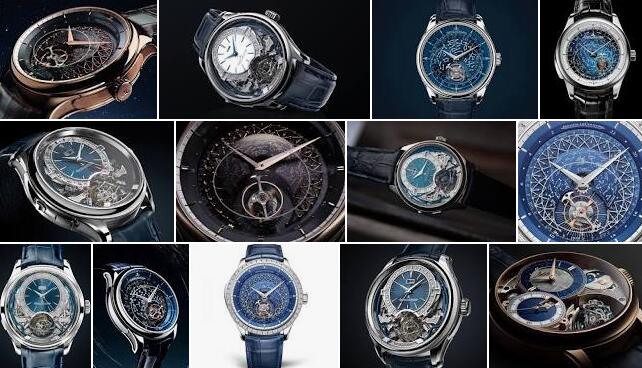 The new Jaeger Lecoultre Master Grande Tradition Calibre 945 embodies Jaeger‑LeCoultre’s mastery of astronomical complications in its celestial vault complication. In order to depicts a stunning sky-chart of the Northern Hemisphere night sky as seen from the 46th parallel – the latitude of Jaeger‑LeCoultre’s home, Jaeger‑LeCoultre talented watchmakers have invented a complex mechanism based on the sidereal day.
As such, the Master Grande Tradition Gyrotourbillon Westminster Perpétuel is sure to seduce and captivate watchmaking experts. Featuring a beautifully legible silvered dial, this exceptional timepiece lets the perfectly orchestrated dance of its Gyrotourbillon and its four trebuchet hammers operate with an irresistible fascination. Master Grande Tradition series epitomises Jaeger-LeCoultre ’s horological ingenuity and artistic creativity, bringing innovations and complications together in fascinating new ways. As the latest addition to this series, the new Master Grande Tradition Grande Complication harnesses more than a century and a half of accumulated expertise.
One of the most interesting things about writing about watches is that as the years gradually unwind, you have an opportunity to observe to what degree various companies follow the vagaries of fashion and the demands of markets, and to what degree they stand apart from various ups and downs and stay the course in terms of remaining committed to their own identity.

At one extreme, I suppose, you have the perennial example of Rolex as a company which seems to take no more notice of world events and market fluctuations than an aircraft carrier takes of a brine shrimp. At the other extreme you see companies – often, but not always, smaller ones with a great deal at stake each year and an awful lot to lose if they do not attract clients looking for the au courant – whose identity and focus is so changeable that from one year to the next, they hardly seem to be the same company at all except for the name (and even that can change in an instant, especially if an energetic turnaround artist is hired to helm the company in the midst of a financial crisis; there have been numerous examples since the 2008-9 financial crisis and, I expect, many more to come).

Then you have companies like Jaeger-LeCoultre. One wants to say that the company occupies a sort of middle ground in all this – that its identity does indeed seem to change very much from one year to the next, with a different aspect of the firm in the foreground at every SIHH (when there was one) but all orbiting around the basic center of gravity of the Reverso and, perhaps, the Polaris watches. I think the reality is quite a bit more complicated, however.

Jaeger-LeCoultre has always struck me, of all the Richemont brands, as the one which is the most committed to diversity in its horological activities. Indeed, in terms of diversity, it hardly has a rival in the entire industry. It is a dangerous business for a brand to try to be all things to all people – a minute repeater from, say, Panerai or Baume & Mercier is apt to raise eyebrows, not because the watch may be questionable qualitatively, but simply because it seems discordant, to make a weak joke, with the perceived core identity of the firm. Jaeger, on the other hand, has diversity bred in the bone, as it were. The company has an astonishing breadth of horological inventions in its history, with a repertoire of well over a thousand different calibers to its credit – and that includes everything from the Reverso, to the Polaris and Memovox watches, to not-well-remembered but fascinating innovations like the Futurematic, to grand and high complications of every description imaginable.
There was a period in the early to, I would say, the mid-2000s when the speed of innovation in the creation of highly complicated and very unusual (and exceedingly expensive) watches from Jaeger-LeCoultre was really incredible. The entire Hybris Mechanica series is a case in point – it included a number of chiming complications, including the Duomètre à Grande Sonnerie (with full Westminster chimes) and Hybris Artistica watches (we were able to see the entire collection of the latter back in 2014). In more recent years, Jaeger-LeCoultre has not especially shone a spotlight on these watches, and innovations in complications, in general (not just at JLC), have taken a different tack. Technical inventiveness is still there, but with much ingenuity now being expended on ultra-thin watchmaking rather than the floridly complex timepieces with which, not that long ago, many of the top haute horlogerie brands sought to distinguish themselves. The era of the wristwatch super-complication now feels as if it was much longer ago than it actually was, but the achievements made, as well as the watches themselves, still have the power to fascinate.
The latest version of Jaeger-LeCoultre’s Master Grande Tradition Grande Complication is a case in point. It is not a new watch. The first version of the MGTGC was introduced in 2010, in white gold; a second version in rose gold debuted in 2015; and this newest and latest version of the watch has a redesigned case and dial and is being offered in two versions – pink gold, and white gold with a baguette diamond-set bezel. The first two versions had relatively heavy-looking cases, which were relatively unadorned (the rationale, I suppose, being that too much detail in the case would distract from the complications) but it’s clear, looking at this year’s version, that refining the case shape and adding some additional design elements, such as the recessed case middle and lugs, results in a much more visually graceful watch. It is one in which the design overall seems much more harmonious with the complications.

And a complicated watch this is. The term “grand complication” in watchmaking traditionally is a quite specific one – it means a watch which has a chiming complication, a timing complication, and a calendrical complication. To really fit the bill, these must be a minute repeater (at least, but a grande et petite sonnerie would certainly make it past the bouncer as well), a rattrapante chronograph, and a perpetual calendar. This is something connoisseurs used to be quite doctrinaire about, and I can remember back in the late 1990s and early 2000s a fair bit of ire directed, in the nascent watch internet, at brands that used the term “grand complication” for anything that did not fit the prescribed definition.  They were engaged in an imposture, went the sentiment, designed to gull those with newly thick wallets but little horological education into thinking they were getting something they weren’t. (Now, we get incensed about date windows. We progress, or maybe not). I enjoyed being prescriptively doctrinaire about the term with the best of them, but as with many things, I have become considerably less inclined to be incensed about terminology over the years (I gave up on objecting to “constant force escapement” as a term for the remontoir years ago).
The Master Grande Tradition Grande Complication is not a grand complication in the narrow sense of the term, but that hardly seems to matter when confronted with the actual watch, which is interesting and even beautiful enough in its own right. I don’t think there is anything quite like it – it is, essentially, a minute repeater combined with an orbital flying tourbillon and planispheric star chart, which rotates (anti-clockwise) once per day – or rather, once every sidereal day. The solar day is determined by the amount of time that passes between two successive transits of the Sun through its zenith, which works out on average to 24 hours. The sidereal day, on the other hand, is based on the passage of a reference point in the sky known as the First Point of Aires, which is the point at which the plane of the ecliptic intersects the celestial equator. As this point is essentially equivalent to using a fixed star as a reference point, you get, if you use it to mark a day, a slightly shorter day than 24 hours – the sidereal day is about 23 hours, 56 minutes, 4.0905 seconds in length, and it is the reference time preferred by astronomers, as it directly reflects the position of the stars in the sky. The Master Grand Tradition Grand Complication also shows standard civil mean time, which at first blush might seem almost an afterthought, but after all, the watch would be useless for anything except timing astronomical transits if it didn’t. I have always thought it rather poetically satisfying, that the tourbillon mechanically couples solar and sidereal time in the watch. Its orbit around the dial takes one sidereal day, but the oscillations of the balance in the tourbillon carriage are what determine the rate at which time passes in the civil time going train as well.