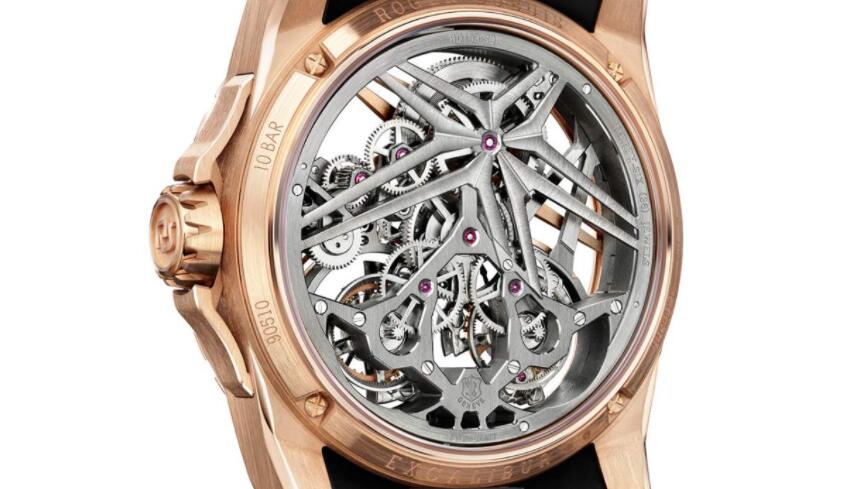 Over the last 15 years, the Excalibur has emerged as a key model for Roger Dubuis. The Swiss brand uses the Exalibur as a platform to best express its vision of “hyper horology”. Nearly 15 years after it first burst on the scene, the maison has launched a new version of this caliber. Here is the Excalibur Skeleton Double Flying Tourbillon – the signature model of this line – presented with a clutch of enhancements that give this watch an up-to-the-minute edge, both design-wise and technically.The imposing 45 mm wide case is available in three versions – pink gold, white gold , as well as a version set with baguette-cut diamonds. All three versions are limited to eight pieces each. The case is now slimmer at 13 mm and is depth-rated to 100 meters; the lugs are more angular when seen in profile. The trademark fluted bezel returns as well, pay attention to the notches on the bezel – this is now a design signature and repeats elsewhere on the case and dial.

Openworked dials and a modern movement architecture have been hallmarks of the Excalibur line. Roger Dubuis pushes the concept even further with the new models. The signature star-shaped bridge of the movement is now released from its functional duties dial side, the decorative bridge now floats above the barrel and is lodged between the flange and the movement plate. This construction further enhances the 3D architecture of the upgraded RD108SQ caliber. The star-shaped bridge crosses over other bridges placed at different levels. The lines on the skeletonized movement are more clean-cut now and the polished angles and edges really play off the light well.In addition to this three-dimensional “floating star” the most visually striking feature of the dial is the presence of two flying tourbillons. The flange arches downwards into the abyss of the openworked dial and the aforementioned notch motif (seen on the bezel) returns in the shape of the polished rhodium-plated hour markers that are filled with Super-Luminova. Skeletonized faceted hands tipped with Super-Luminova are used to indicate time. This notch motif can also be spotted on the star bridge, the hours-wheel bar, and the crown.

The new DFT Calibre RD108SQ also carries the prestigious Hallmark of Geneva, an exclusive quality seal that mainly concerns the decoration and handfinishing of movements made in the Canton on Geneva. This movement is a reinterpretation of the RD105SQ, which was the first skeletonized movement with a double flying tourbillon connected with a differential. The escapements oscillate at 2 x 3 Hz (21,600 vph) and is connected to a new differential that allows for more precise timekeeping.The lower part of the tourbillon cage is made from lightweight titanium while the upper ones are in mirror-polished cobalt chrome. Since both tourbillon take a minute to complete one revolution, the tourbillon cage on the right cage to double as the running seconds display.The movement comprised 319 parts and features hand-polished surfaces. As far as finishing goes, one can spot traditional touches like circular-grained surfaces as well as modern techniques like shot-blasting on the star-shaped decorative bridge and bridges with 5N coating.

The watch is presented with a black leather strap with a Quick Release System that enables users to switch straps without any tools. Complicated movements encased inside luxury handcrafted timepieces are view more as a piece of art than a mechanism that drives a watch. Each model from Roger Dubuis portrays the movement as the main design feature, giving the owner a closer look at how it operates. The watchmaker is proud to announce yet another grand complication, the Excalibur Double Flying tourbillon. The new collection by Roger Dubuis includes three styles, including rose gold, white gold, and rose gold/diamond set. The full skeleton dial focuses on the craftsmanship of the Roger Dubuis Excalibur with subtle markings indicating numerals. The two Two tourbillon carriages entirely made of titanium for a power reserve of 72 hours are located at the 5 and 7 o’clock positions. Each of the three models is limited to 8 pieces each, making the already special timepiece even more collectible for watch enthusiasts. The Roger Dubuis Excalibur Double Winding Tourbillon Collection Elegant and classic are two words that are seldom used to describe a Roger Dubuis watch. Instead, try words like brash, bold, and outrageous. Yes, Roger Dubuis is back at it again with a new version of its second generation Excalibur Spider Double Flying Tourbillon watch. The new watch features aesthetic elements meant to evoke the high-tech and exciting world of supercars and motor racing, so if you consider yourself a petrolhead, read on to find out more.