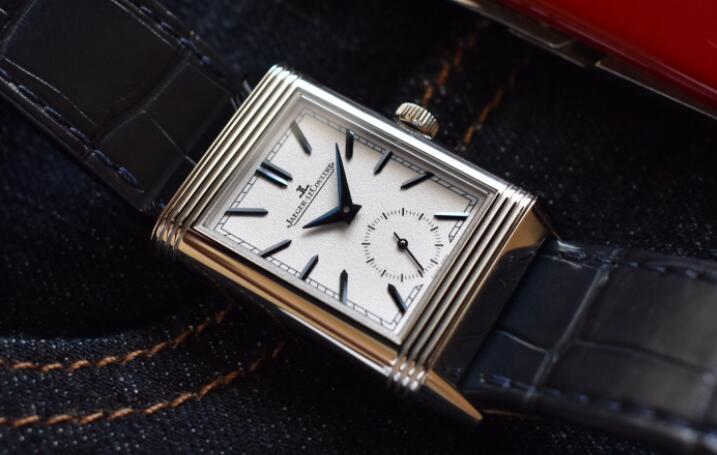 All Jaeger-LeCoultre Reverso watches have common characteristics: a swivel casing to protect the glass and the dial and a rectangular casing with triple fluting, art deco style. More than a watch, the Reverso is now a classic art deco, thanks to the design of its casingCreated in 1931 from an idea of René Alfred Chauvet, the Jaeger-LeCoultre Reverso watch is now one of the few luxury watch icons and an exceptional example of modernity and mobility. Its turning system allowed it to meet the challenge of British officers in India: to create a watch able to withstand the shock of a polo match.An iconic watch from an iconic brand, Jaeger LeCoultre is known as the watchmaker for the watchmakers. The Reverso needs no introduction since it debuted in 1931 when it was supposedly presented as a sports watch for polo players, the ability for the dial side to be protected when flipped over and covered the stainless steel caseback while playing polo. The particular Reverso covered today is the Reverso Tribute Duo, introduced in SIHH 2016. I Picked this up a year ago while walking through the mall and saw a sale. As one would say, it was fate that brought this watch to me as I first saw this while strolling down the streets of Amsterdam and couldn’t help myself but walking inside upon seeing this.

In this review, we will cover the case, dial and the movement for this Reverso. However, please excuse the scratches you may see in the photos as I have worn this piece extensively since acquiring it, but once you get a up close view of this watch, you’ll understand why resistance is fultile

As you can see the case construction is quite unique, besides the fact that one can slide the watch towards the crown side and flip it, the case itself has a nice engraved sunray pattern instead of the perlage on the other models. The actual case back has a nicely brushed finish while the side case is polished.The case dimensions are 42.8mm x 25.5mm x 9.15. Very impressive when considering the watch has two dials and 2 time zone functions, which I’ll get into details next, yet it is still under 10mm in height!The local time side of the dial, which is white at first glance, is actually grained silver. The dial has a nice contrast with the heated blue indexes and blued dauphine hands. The outer edges of the dial is surrounded by printed minute tracks. There is a running seconds subdial at 6 o’clock with blued hand again and blue tracks. The indexes have a nice faceted polishing. Due to the applied indexes and and sizable hands, the macro shot provides a nice depth of the dial of the local time.Now, turn the watch over, you have a blue dial with guilloche, or this case, Clous De Paris, where the dial has little triangles. To provide a nice contrast to the blue dial, the applied indexes are silver as well as the hour and minute hands.At the bottom of the dial, there is the day night indicator, so you can keep track of the home time and not only know what time it is but whether it is day or night!In addition, the main 12 hour applied indexes are recessed as well as the day/night indicator. This makes it all the impressive as the watch not only has a movement that can power two time zones but also the depth of the dials on both sides while still sitting under 10mm!Powering inside the watch is the JLC 854A/2 with 45 hours of power reserve. It beats at 3Hz or 21,600 VPH and is adjusted to 5 positions and passed the JLC 1000 hour testing. The winding action is very crisp, with strong clicks when winding. The only negative I can find with the movement is the lack of a stopping seconds hand, which was hard for me to adjust at first, but not an issue after a few weeks. In addition, the crown is signed with the JLC logo and is easy to grasp to wind. Furthermore, compared to the older Duo Face models, this model does not have a protruding button on the side for advancing the second time zone. Instead, when sliding the watch out, there is a pusher that you slide to advance the hour hand on the blue dial side.The Reverso is a unique time piece that will always stand out due to its design. After 85 years of production, one can still recognize a Reverso from far away due to the rectangular case.

It’s been a year since I picked up the Jaeger Lecoultre Reverso replica watch, I had some concerns about it due to the case design, but it has grown on me, and I love it more and more, despite the heavy competition from the rest of my collection. I have mostly worn this with suits to work, but I believe it can work just as well in casual settings with jeans and polo shirts or even t-shirts.