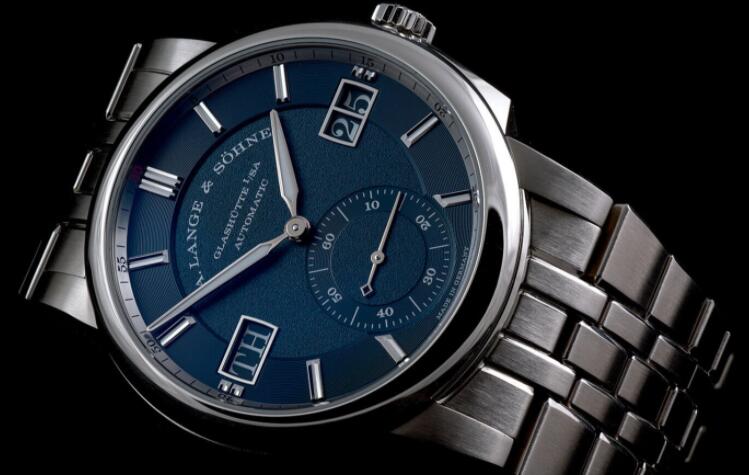 While I was quite excited about the existence of the watch, I was even more pleased to hear that Lange was gathering feedback from a significant number of enthusiast collectors about it. And while I wasn’t 100 percent convinced by the time I left the room that it would be a must-have for me in its prototype form, when I saw the completed, updated launch version in New York in October there wasn’t a moment’s hesitation before I was asking how to sign up!

Why I bought the A. Lange & Söhne Odysseus and how it fits
In my pal Terry’s collection taxonomy of foundational, patronage, and fun watches, A. Lange & Söhne’s Odysseus for me sits pretty squarely in the “foundational” category – a watch that can be a core element of a collection over time, and that clearly represents the strengths and brand character of its maker.
In the center of the table was a tray covered with a cloth, which they soon drew back to reveal something that many Lange enthusiasts, including myself, had been waiting for: a prototype version of the steel watch that would become the Odysseus.
At the same time, I’ll flatter myself by suggesting that it’s just a tiny bit of a patronage purchase as well in the sense that it represents a vote of confidence in, and support for, the Lange team as it takes a clear step beyond the precious-metal dress-watch confines of the brand’s first 25 years.

Within the array of watch types in my assortment, the Odysseus helps me nudge the balance a bit more away from its strong dress watch core to reflect my own shift to less formal attire and a more relaxed lifestyle; in that sense, I suppose that A. Lange & Söhne and I have something in common when it comes to this watch.
If you’re at all a Lange enthusiast, you’ll likely understand the most compelling reason I bought the Odysseus: it’s a Lange watch you can wear every day.

Why I love the A. Lange & Söhne Odysseus
Several of my pre-delivery (but post-order placement) thoughts on the Odysseus are included in our team discussion and I’ll try not to repeat those here. But there are a number of reasons I’ve noted during my two months of ownership so far that make me very happy indeed that this watch is mine.
That new-watch smell: Okay, maybe that’s not exactly a thing, but there is a certain joy in receiving a new piece from a major manufacture, whether it involves a salon ceremony or a trip to the UPS Store. I took my sweet time opening and reviewing the various cards, ancillary items, and boxes before proceeding to the main event.
The eternal hope, of course, is that the unveiling of a new piece brings unalloyed pleasure. And I’m pleased to report that once I’d figured out how to peel off all of the protective film, I was grinning ear to ear with how striking this watch really is.
A true step forward: A. Lange & Söhne’s team could have just slapped a metal bracelet on a steel Datograph and been done with it, but they didn’t. I applaud them for that, and among other things I’m one of those who thinks that the “gauntlet” look of the bracelet as it broadens to approach the case is not only daring but successful.

Lange’s commitment to moving forward was further evident not only in the watch itself, but in smaller touches such as the rough-surfaced box and distressed treatment of the leather travel pouch and owner’s book folio.
I’d have been satisfied with a more traditional Lange leather box with that cream-colored interior (which has the unfortunate tendency to fuse the watch cushion and box into a single solid mass over time), but now that I’ve seen the Odysseus-specific accessory designs I can’t imagine them any other way.
The A. Lange & Söhne Odysseus was released last October, which feels, now, in March of 2020, like a million years ago. The Odysseus was the first full production stainless steel watch from Lange, which prior to its launch confined itself almost exclusively to precious metal timepieces. Sure, there were very occasional releases of some steel watches, but they were insider’s watches with a vengeance – Lange did not go out of its way to announce their existence and, to this day, there is still no official confirmation from the company on the actual number made (although certainly, reasonable figures are fairly common knowledge among Lange enthusiasts and collectors).
For makers of luxury watches, steel was, historically, a bit of a sideline. When I first began traveling to Switzerland and visiting watch factories many years ago, I remember one industry lifer saying to me, “You know, when I was a kid, if someone was being driven in a limousine, the guy in the back was wearing gold, and it was a Patek, and the guy in the front was wearing steel, and it was a Rolex.” Steel was very occasionally used by top-tier haute horlogerie firms such as Audemars Piguet, Patek Philippe, and Vacheron Constantin, but it was unusual. These firms made fine watches designed for wealthy clients who wanted a Swiss watch that expressed all the conservative values of high-end Swiss watchmaking. As a rule, this meant gold, gold, platinum, and more gold. Steel was a utilitarian material – appreciated for its technical qualities but certainly not loved for its intrinsic beauty, and generally, it was considered beneath the dignity of a fine watchmaking house to clothe its timepieces in it.

All this changed in 1972. The watch industry was already experiencing considerable turmoil thanks to the introduction of quartz watches. On Christmas Day in 1969, Seiko launched the Astron, and both analog and digital quartz watches began to follow in rapid succession, including the LED-dial Pulsar, which was first shown to the public on Johnny Carson’s Tonight Show in 1970. At Baselworld 1972, however, Audemars Piguet showed the Royal Oak. Its public debut was not without irony – the complex case was very difficult to machine in stainless steel, so the prototype shown was white gold. Audemars Piguet’s now-retired museum director, Martin Wehrli, was there and once told me, “Everyone looked at the watch in the booth and they said, ‘congratulations!’ Then they would walk around the corner and say, ‘they’ll be out of business in six months.'”
Obviously, the dire predictions proved unfounded, and with the launch of the Nautilus, from Patek, in 1976, the luxury stainless steel sports watch became a permanent part of the modern horological landscape. However, when A. Lange & Söhne launched its first post-German-reunification collection in 1994, a luxury watch company (and Lange clearly, from the outset, intended to compete point-for-point against the best Switzerland had to offer) was still a company that made primarily precious metal watches. The idea of presenting a steel model as a regular production piece was, at the time, antithetical to the old-school vision of luxury watchmaking. While Lange pioneered both revolutionary designs and its own very idiosyncratic take on high-end watch finishing, it still adhered to the notion that luxury in watchmaking was mostly a precious metal party.
However, as the 20th century came to an end and the 21st began, I think it gradually became clear to Lange that to be too doctrinaire about sticking almost exclusively with precious metals meant missing some interesting opportunities, both commercial and aesthetic. The result of many years’ deliberation is the Odysseus.

Odysseus, as those of you with classical inclinations will know, is Ulysses, the Greek commander and veteran of the Trojan War who took twenty years to come home. (I have always thought it a black mark against his character that he spent a good chunk of that time canoodling with Circe when he knew perfectly well that Mrs. Odysseus was waiting back in Ithaka, but that’s a rant for another day.) The development of the Odysseus watch didn’t take twenty years, but it was a multi-year process. For a company so strongly identified with very formal precious metal watches to take this step was not only out of the ordinary, it had the potential to seem out of character. The folks at Lange obviously put a lot of thought into making something that would clearly be a Lange watch – instantly identifiable as one, in fact – while at the same time breaking new ground.