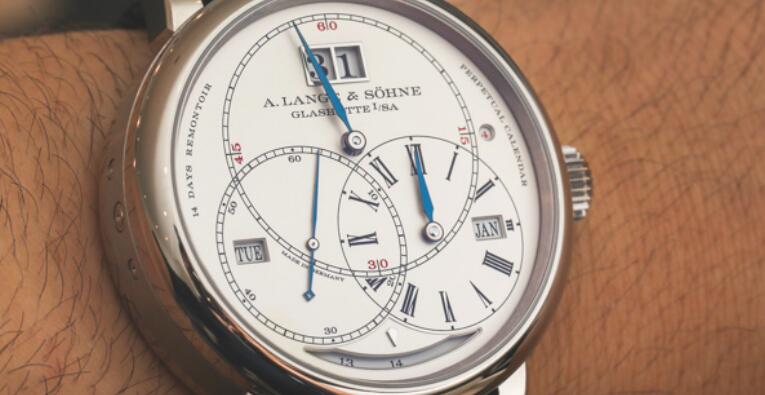 In March of 2014, I said that there are two directions a new Lange lover typically takes: either towards the Lange One (and its several off-shoots), or the Datograph. Both are great roads to travel, and in that same mini-review, I said that once one has explored the Lange 1 or chronograph category, it’s common to head into the uniquely Lange world of the awesome Zeitwerk. But what if you care more for chronometry than complications? Then you head to the Richard Lange. Today, we take a hands-on look at not a new release from Lange, but just one of our favorite pieces in their collection – the Richard Lange Boutique Edition.The A Lange Sohne Richard Lange family is a young one, launched in 2006 as a revival of scientific observation watches. Essentially, the goal was to create the purest, most precise expression of timekeeping possible. They did so with a traditional three-hander, with a large sweeping seconds hand. Here, precision and finishing of the caliber L041.2 movement trade priority over all else.Named after Ferdinand A. Lange’s eldest son, the collection pays tribute to the man who is credited with, in 1929, realizing that adding beryllium to the nickel-steel alloy of hairsprings made them less susceptible to temperature changes, and more elastic. A patent was granted in 1930 for this change, and it can be said this discovery played a large part in pushing the concept of an observatory watch forward.While the RIchard Lange itself has been around since 2006, this particular example cased in white gold with blued hands and accents was introduced in 2013 and is available exclusively in A. Lange & Söhne boutiques. Though all previous examples (yellow, rose, platinum) have their charms, the white-gold case with blue accents of this piece tend to bring it to the top of the heap in the opinion of many, including myself.The dial here is made of argenté silver, and the case comes in at 40.5 mm in diameter, and is 10.5 mm thick. On the wrist, the watch is substantial, but not overwhelming, and when you consider that the point of a scientific observatory watch is indeed to read the time quickly and easily, the slightly larger size of the Richard Lange works. Here it is on my wrist.You can also see that depending on lighting conditions, the dial can appear as a bright silver or a muted grey. Both are equally nice. But, just because this watch is a simple three hander from the front doesn’t mean there isn’t much to look at from behind, as one would expect from any Lange.The most noticeable aspect of the Richard Lange’s L041.2 caliber is the additional sweep-seconds train, featuring its own hand-finished (of course) bridge at the very center of the movement. This is what powers the center seconds, and it is interesting to note that the original Lange wristwatch caliber 28 (story here) also featured indirect seconds. This is certainly not a coincidence.Finishing on this caliber is, as with all Langes (even those under $20,000!) downright superb. All plates and bridges are made of untreated German silver, the balance cock is engraved by hand, and the 199-componnent movement is just a thing of pure beauty. This caliber uses a lever escapement and has a power reserve of 38 hours when wound.Many watches from Lange really define their aesthetic category. There is nothing else that looks like a Zeitwerk. There is nothing else that looks like a Lange 1 (actually, there is, but that’s a different story for a different day), and nobody comes close on several other pieces in their collection. With the Richard Lange, there are are other watches that look very much like this observatory-minded three-hander, but few with the same charm. This is for someone who might not love the over all “German-ness” of the Lange aesthetic found in the Lange 1, for example, but appreciates the technical prowess and extreme levels of finishing. This watch is certainly a sleeper, conceived for those who appreciate details over attention-grabbing design.

The A Lange Sohne Richard Lange boutique edition in white gold is only sold in, you guessed it, Lange boutiques. The price is around $37,000. Last we checked, the Lange boutique in NYC did have one in stock and you can check them out here. You may also give a call to the Palm Beach boutique as well (photo report here).

The best way of reading information from the orbital moon display is to imagine the balance wheel acting as the sun, shining towards the earth, partially lighting up the moon and our planet. Having more space in the movement to work with, the Terraluna is equipped with the most accurate moon phase indication that Lange ever created. It reproduces the synodic month of 29 days, 12 hours, 44 minutes, and 3 seconds so precisely that it takes 1058 years before the display needs to be corrected by one day. And although chances are that you will let the manual-wind movement wind down sometime much sooner than that, it still is a remarkable achievement.

As impressive as the aforementioned complication is, the in-house movement L096.1 goes way beyond that and offers a selection of true horological treats. Thanks to its twin-barrel configuration it sports 14 days of power reserve – indicated by a disc, as seen at the 6 o’clock position on the face of the watch. To minimize the deterioration of chronometric performance as the movement is reaching the end of its power reserve, it is equipped with a constant force escapement. Its primary function is to provide extra torque, an extra “push” of energy, towards the escapement over the entire course of the power reserve. In the case of the Terraluna the remontoir – as the constant escapement is also referred to – releases an identical portion of the available energy to the balance in 10-second intervals, assuring that the torque remains constant. The result is a relatively stable amplitude and more consistent accuracy from the first day to the last.Completing the list of features is the perpetual calendar. With four apertures on the dial – for the indication of the day of the week, month, leap years and the “outsize date” -, it packs one final, barely visible modification to make this not-so-ordinary complication just a bit more complex, and perhaps easier to use. Although not a completely unique feature by definition, it is something more rarely used owing to the difficulties linked its execution; the twist is that all displays of the calendar switch forward instantaneously at the end of the days and months. The main issue with this – especially with larger apertures – is to have sufficient power coming from the movement in order to enable the mechanisms to change not gradually, over the course of several minutes, but instantly, and simultaneously. According to Lange, to keep the power for the switching process as low as possible, the required energy is “gradually built up via a cam and then released abruptly at midnight”.The instantaneous perpetual calendar, the extremely accurate moon phase display and the remontoir would all be very strong features for any and all manufactures. The Richard Lange “Terraluna” packs these under one roof – or dial, if you like – into a beast of a movement with 787 parts and a diameter of 37.3 millimeters. This necessitates the use of a rather large case – 45.5mm in diameter and 16.5 in height -, but that should be a justifiable sacrifice in terms of this array of truly special complications.