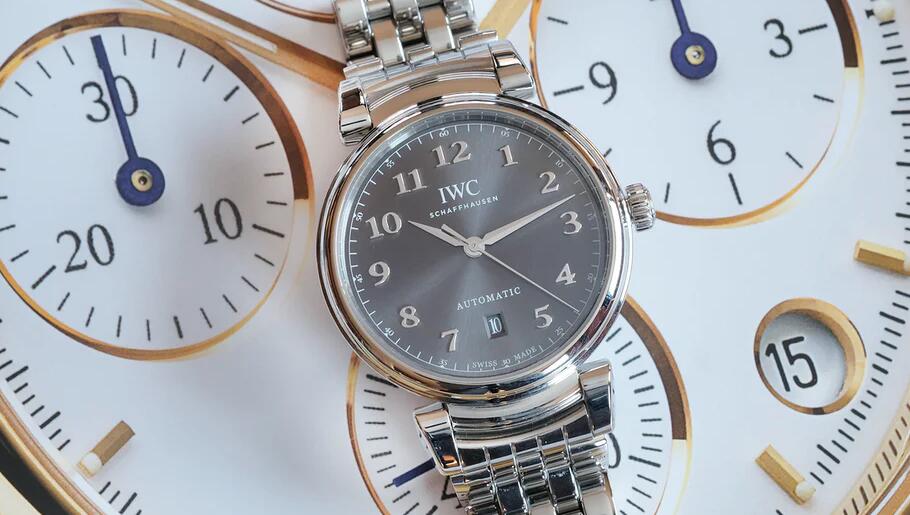 With the Da Vinci Chronograph, IWC launched its first in-house chronograph movement: the 89360 calibre. For this watch, IWC returned to the tonneau-shaped case initially featured on the 1969 model. From a technical point of view, the case was highly complicated – the most advanced case IWC had ever built. IWC Da Vinci Automatic Moon Phase 36
Coming out of SIHH, it was the complicated watches from IWC’s Da Vinci collection that were getting most of the attention. This includes both the very complicated models like the Perpetual Calendar Chronograph and the smaller complications such as the ladies’ moonphase. But for me it’s the time-and-date model that stands out as my favorite piece in the collection. It piqued my interest a few weeks ago, but after spending a few days with it I found myself enjoying it even more than I’d expected.

There’s no two ways about it – the Da Vinci collection is polarizing. People generally love it or hate it. I’d say that while I have no vitriol directed towards these stylized watches, they’re definitely not my favorites from IWC and I’d probably even fall closer to the second camp than I would to the first. However, there’s a lot to love about the Da Vinci Automatic, even if you might not think it’s a watch you’d naturally gravitate towards.
Think of this watch as the pure distillation of the codes that comprise the new Da Vinci collection, with everything that makes them what they are and nothing extra. The watch starts with a 40mm stainless steel case and I really applaud IWC for resisting the temptation to make this a 42mm beast. I think some of that comes down to wanting the watch to appeal to both men and women, but regardless of the reasoning, I’ll take it.
Immediately you’ll notice that rounded bezel and the distinctive articulated lugs. The former nicely frames the dial and gives the case some extra oomph. The latter, paradoxically, look big but actually help the watch wear smaller than you’d expect. They are hinged at the case, and carry the bracelet end link, nicely hugging the wrist and holding the case down tight. That said, they’re still a lot of look and one of the reasons many find the Da Vinci tough to imagine on their wrist. I found them much more comfortable than expected and when paired with the bracelet they don’t look nearly as dramatic.
The dial is my favorite thing about the new IWC Da Vincis though. Hands down. It’s not even close, really. This model has a rich slate sunburst finish that turns various shades of blue, purple, grey, and brown, depending on the light. Even just wearing the watch around the office, I could get three or four dial colors on the walk from my desk to the conference table. The hands are nice and sharp and the fancy numerals (which are definitely not Breguet numerals, by the way) are applied and stand tall off the main dial. Even that date window at six o’clock is finely cut and the slim numbers just show though. Turning the watch over, you’ll find a rather simple caseback, which I like here. Nothing fancy, but nothing fancy is needed. Underneath is a simple automatic movement with a 42-hour power reserve and hacking seconds. It’s called the IWC caliber 35111, which is the company’s version of the Sellita SW300-1. This is the same caliber you’ll find inside the basic Portofino watches as well as the 36mm Pilot’s watches.
The model I tried here is the one on a stainless steel bracelet, though the watch is available on a strap too. The link bracelet is comfortable and has a feel that sits somewhere between dressy and sporty. It’s brightly polished throughout, so if you wanted something understated it’s probably best to look elsewhere. The model that comes on a strap has a different dial and hand set (silver dial with gold hands and markers), and I much prefer this version. Also, wearing the watch on a strap really accentuates those lugs, which could be a good or bad thing depending on where you come down on the style.
On the wrist is where this watch really impressed me. I thought the lugs might look too conspicuous or that they would make the case wear larger than I’d like. I was wrong on both counts. The case fits nicely to the wrist and wears comfortably. Again though, it’s the dial that gets me. There’s no other way to put this – the Da Vinci looks a lot more expensive than it is. The color and finish of the dial, and those crisp applied numerals just look awesome. The more I looked at the watch, the more it won me over.
All in all, the Replica IWC Da Vinci Automatic is exactly what you’d think. It’s a pure, no-frills rendition of the 80s-inspired design with all the details accounted for. And, even if you’re a Da Vinci skeptic, I highly recommend you at least give it a try.