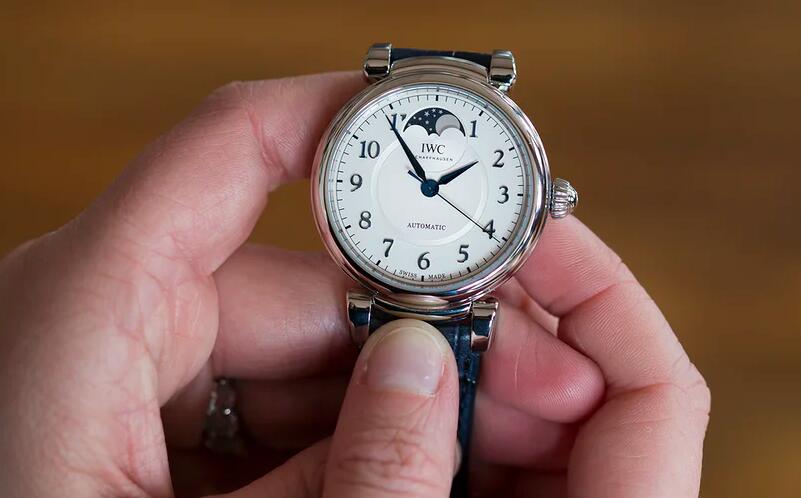 Before I go into my thoughts on this watch, I want to preface this story with a pretty important caveat. I do not like the old Da Vinci watches. I never have. Sorry. BUT, I am always open to new things and am sometimes pleasantly surprised when I don’t let my preconceptions get the better of me. This is one of those instances.
There are six new Da Vinci models for this year: the Automatic 36, the Automatic 40, the Perpetual Calendar Chronograph, Tourbillon Rétrograde Chronograph, a special Chronograph Edition “Laureus Sport for Good Foundation,” and the watch we have here, the Automatic Moon Phase 36. They all incorporate a new and improved Da Vinci case shape with a similar aesthetic to the 1980s originals. The lugs are short and have an angled tear-drop shape, and are articulated, with the spring bars attached in between as usual. The watches come in red gold or steel, with or without diamonds (on the ladies’ models), and with silvered, blue, or dark gray dials.

For my look at the IWC Automatic Moon Phase 36, I went for the model in steel with a silvered dial. I found it to be the most attractive out of the bunch, and while it is marketed as a ladies’ watch I don’t think it is overtly feminine at all (do what you will with that information).
You guessed it, this watch measures 36mm in diameter with a thickness of 11.6mm. It is available in plain stainless steel, stainless steel with diamonds, and in red gold. The stainless steel version that you see here, which is free of diamonds, has a really nice silver-plated dial with applied navy blue Arabic numerals. The numbers have a grea three-dimensional quality and look almost sculptural. The moonphase indicator sits in an aperture at 12 o’clock and is the star here without overpowering the rest of the watch.

Inside is the IWC automatic caliber 35800 movement, with a 42-hour power reserve. In case you don’t know, this movement was also used in the IWC Portofino Automatic Moon Phase 37 (released in 2014), so this is not a new movement by any means. The solid caseback has an engraving of the Flower of Life, which is a geometric pattern of overlapping circles that Leonardo Da Vinci himself used to study and draw. The watch comes on an navy alligator strap with a steel twin-folding clasp.
One of my favorite things about this watch is that silvered dial. The way that it shimmers when you wear it, along with the perfectly placed moonphase aperture all lend to a well-balanced and appealing read. The applied Arabic numerals are hefty enough so that they cast a tiny little shadow, a rich detail that not all dials can brag about. Additionally, I really dig the recessed guilloché center ring – it’s a tiny, yet thoughtful detail that adds depth to the overall look of the watch.
While it is nothing new for IWC (see the Portofino Moon Phase 37) I also really love having the moonphase up at 12 o’clock. It isn’t necessarily the most obvious place for a moonphase (six o’clock is far more common), but I find the placement at noon less invasive overall. The aperture is the perfect depth and is stepped as well, adding another layer of depth. The moonphase disc itself is well-executed with a deep navy blue disc and painted silver stars and moon. For a complication that can often fall flat, IWC has really nailed it here.
Which brings me to the case design. The original Da Vinci was quite polarizing – you either love it or hate it. As I mentioned earlier, it is not my cup of tea and I am glad that IWC gave it a good old-fashioned face lift. The original had an almost bubbly quality to it (just look at the pushers on the perpetual calendar chronograph listed above), and the new shape is a little more refined and classic. Separating the lugs, rather than having one solid hinged lug on either side of the case, goes a long way here. The only thing that I still really don’t like is the oversized crown – it reminds me of a 1940s Lindbergh Hour Angle Navigator’s watch with onion-shaped crown, which seems out of place on a watch like this.
The watch wears really nicely too. The lugs aren’t too long, so there is no overhang on my wrist, and it is definitely comfortable when you put it on. The case is 11.6mm thick, which at first didn’t seem like that much, but on the wrist it does wear a little heavy after a full day. Overall though, I still wouldn’t categorize this one as chunky or heavy. My only complaint about this watch is the strap (which is silly because I know you can just change it). But you would think that because this watch is marketed to women the strap would be made for, you know, women. When I wear it fastened on the last hole it’s still too big, and I have a pretty average-sized wrist. It’s a little detail, but one that’s hard to ignore.
I think that this is a really fantastic watch from the IWC Da Vinci moonpase replica collection. And while people may not love all the pieces, I think that the Automatic Moon Phase 36 sticks out as the front runner. It would make a great daily wearer if you’re looking for something with just a bit more personality than most.