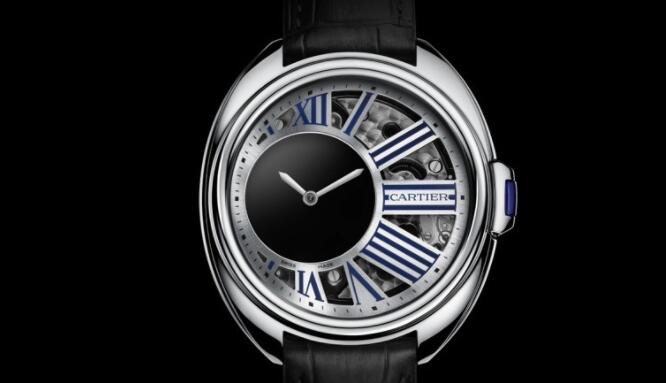 The Cartier Clé (“Clé de Cartier”) Mysterious Hour watch is probably my favorite new Cartier men’s watch model debuted here at Watches & Wonders 2015 in Hong Kong. It is actually a combination of three existing Cartier elements. First, is the also new-for-2015 Clé de Cartier watch (hands-on here) collection case. Next, is the in-house made Cartier caliber 9981 MC which was debuted in 2013. And last, is a presentation of Cartier’s particular form of semi-skeletonized dial that we have seen from almost the beginning of Cartier’s higher-end “haute horology” collection of timepieces.
In 2013, I went hands-on with the Rotonde de Cartier Mystery watch that was inspired by historic Cartier clocks which use transparent discs to move hands. These were dubbed “mystery clocks” because it was not obvious how the hands were connected given the illusion that they were floating. This technique has been applied to timepieces before, but Cartier introduced the “mystery” hands which are on transparent discs in the Cartier 9981 MC movement. This movement makes a return for 2015 in the Cartier Clé Mysterious Hour watches. Let me be the first to say that the minutes are also mysterious…
Made from 158 parts, the 4.61mm thick 9981 MC movement operates at a modern 4Hz and has a power reserve of 48 hours. That is rather nice considering that the movement itself is actually a crescent. Much of the interior space is open, dedicated to the sapphire crystals that the hands for the hours and minutes are placed upon. This interior section of the watch is otherwise transparent, offering a view right through the dial to the other side. Some of the movement is visible through the dial and the rest can be admired through the sapphire crystal caseback window. I like this a lot, because compared to the standard Clé models with the 1847 MC movement, the Clé Mysterious Hour appears to have a slightly larger exhibition window.
It is very important to note that while the standard Cartier Clé watch (for men) is 40mm wide, the Clé de Cartier Mysterious Hour is 41mm wide. I believe this small amount of extra size was necessary to accommodate the wider movement. The case is still pretty thin at just 11.25mm. Interestingly, from a case material perspective the Clé Mysterious Hour will be available (at launch) in 18k pink gold as well as 950 palladium. Similar to platinum, we really don’t see palladium watches that much. I doubt, however, that there will ever be a steel version of the Clé Mysterious Hour – but that would be awesome.
Please refer to previous articles on the Clé to understand more about how the crown system works. Well, it doesn’t operate differently than most other crowns from a utility standpoint but the entire point of the Clé collection is to have a crown which mimics the feeling of winding a traditional clock winding key. “Clé” means “key” in French and that is why the name is used for the collection. It is a cool part of the watch and as a cabochon in the rectangular crown there is an actual piece of blue sapphire. I mention this because in some less expensive Cartier Clé de Cartier 41 Mysterious models blue spinel has replaced blue sapphire.
The off-centered “mystery” time display balances well with the rest of the dial which has blue-filled Cartier-style Roman numeral hour markers. I am typically not a fan of asymmetric watch dials but this is one of those exceptions that I find very visually interesting. While the pink gold version of the timepiece has a more immediate “wealthy feel,” I really like the colors of the palladium model and find it the most visually striking of the two new Clé Mysterious Hour models.