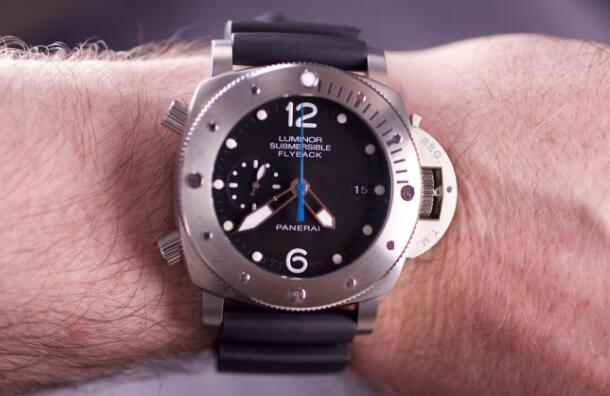 I have been into wristwatches for quite a long time now and I have seen a large number of wonderful timepieces with distinctive designs and functionalities. Yes, we all know watches are for time telling but to us horology fans, it goes beyond this time telling functionality, every watch has its unique personality that blends well with the wearer’s attitude. Therefore, you can easily tell a man’s preference based on the watch on his wrist – while purely subjective this is how I see it.

So in saying about my exposure to watches, I have always liked the intricacy of Panerai aesthetics. From the svelte lines of the Radiomir to the gentleman charms of the Luminor and the tool-ish personality of the Submersible, Panerai has always been on the front lines. I have a good size wrist so a large watch is always welcome and Panerai watches are generally speaking quite large but of course, even for me, this is a bit too large. Technically, most of Panerai’s interesting designs are larger than 44 mm which may not be the preference of many horology fans but if you are like me, who are inclined to use large tool-ish watches with emphasis on style too, I am very sure you will also like the Panerai Pam01305 so join me as I share my long-term review of this impressive timepiece. First, I personally offer my gratitude to Panerai for lending me the watch for 2 months so folks, you will only read an honest review about this amazing timepiece.

So without further ado, the Luminor Submersible 1950 3 Days Automatic Titanio is one of the most classic Panerai Submersibles. It is very easy to see the classic charms of the watch but of course, you can as easily feel the contemporary improvements made to the watch such as the powerful P.9010 calibre ticking under the hood.
Of course, the Luminor Submersible 1950 model produced in the past years with the reference PAM00305 is a really cool watch, no doubt about that but the new iteration with its new dial and mechanism refreshed after a small makeup operation is just a whole bunch better. Interestingly though, based on my experience with the watch, the technical features of the PAM01305’s mechanism, with the updated bridge design, are the same as its predecessor.
Once the razzmatazz has been set aside, some products reveal a lack of substance. Indeed, some goods and services confer little benefit, throwing into doubt the justification for offering them in the first place.

The Panerai Luminor Submersible 1950 3 Days Chrono Flyback PAM 614 is an honest timepiece. It is a true diver’s tool and its merits justifies its creation. There is no smokescreen, this is an ideal watch for ocean explorers, courtesy of its maximum water resistance of 300metres and hewn from granite robustness.

Part of the allure of this Panerai is that it takes inspiration from the brand’s back catalogue. In 1956, Panerai developed a watch for the Egyptian Navy. The watch was powered by an 8-day Angelus movement and featured a small seconds display at 9 o’clock. The timepiece could be ‘distinguished by its rotating bezel with reference markers at 5-minute intervals, and an oversized case, 60mm in diameter’.
The original 1956 Egyptian Navy Panerai measured a colossal 60mm in diameter, whereas this watch is much smaller, measuring 47mm. Nevertheless, this remains a very large timepiece. On a personal level, I found the watch afforded a cosseting marriage with my wrist, albeit I concede I am blessed with leviathan-like arms. Ultimately, there is no substitute for trying on the watch for yourself and seeing whether it grants an agreeable union.

The decision of Panerai to eschew the usual sub-dial type chronograph registers is a stroke of genius. By equipping the watch with centrally located chronograph seconds and chronograph minute hands, the dial exhibits a very clean and uncluttered appearance. Furthermore, the clever use of luminescent treatment with the hour and minute hands emitting different colours is inspired.

I accept that Panerai has chosen to uphold the historical approach to designing divers’ watches, namely equipping the timepiece with a solid case-back. However, there is part of me that wishes to see the excellent P.9100 calibre via an exhibition case-back.

Finally, some watches masquerade as something they are not. Some so-called divers’ watches have a paltry resistance to water and would be unable to sate the needs of an adventurous diver, but the Panerai Luminor Submersible 1950 3 Days Chrono Flyback PAM 614 is the ‘real deal’. It has an impressive water resistance of 300 metres and it grants the wearer a lucid dial which has relevance whether below the water of firmly on land.