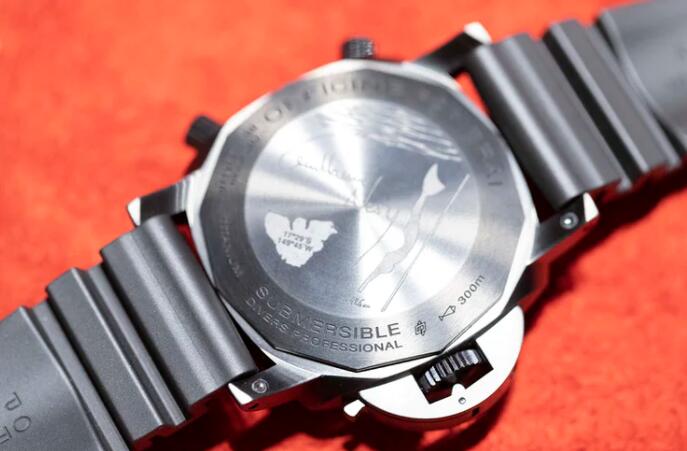 When I arrived at Panerai this year, I was greeted with a booth that was fully decked out with images of the Submersible, Panerai’s deep-diving technical tool watch. The Panerai Luminor Submersible 47 Chrono Paltrinieri Edition, we were told, had been split off from the Luminor line, a move that seemed to make sense on several levels. Sure, the watch comes in a Luminor case, but it’s a class of watch all its own. It’s a dive watch that often comes with 300m of water resistance or more, is 42mm in diameter at its smallest, and is constructed in such a way as to feel like a serious piece of machinery on the wrist. And with more fashion focused iterations of the Luminor, like the Luminor Due 38, coming in recent years, having a category of its own for robust dive watches seems like a good way to cut through any potential confusion about what Panerais are and aren’t suitable for diving.
One of the watches that immediately caught my eye during our Panerai appointment was the limited edition version of the Submersible that Panerai made for its partnership with free diving champion Guillaume Néry. It’s a flyback chronograph with a 47mm titanium case wrapped in a coating of DLC with a blue-to-black fume dial that has a depth and texture that’s new to the Submersible line this year. (The unlimited version, PAM00982, which will set you back about half as much money, comes with a textured grey dial, plain titanium case, and a blue ceramic insert for the bezel.)
While I think that the limited edition you see here is much more visually interesting than the unlimited version, it’s fair to ask how Panerai and the 15 buyers of these watches will justify a 2x multiple on the cost of a watch that is fundamentally the same (same movement, same base case material) as the unlimited version. And that’s where things get interesting. If you’re one of the 15 customers who buys the limited edition, you’re also buying a ticket to go free-diving with Guillaume Néry in Moorea, French Polynesia, which Néry calls home.
With either watch, you get a robust 47mm watch with 300 meters of water resistance. There’s really no getting around the fact that this is a large watch, and indeed it shows every bit of its 47mm in the image above.. Having said that, I found the curvature of the lugs and elastic nature of the rubber strap made for a wearing experience that felt pretty good on my seven-inch wrist. While I don’t think that I could wear a 47mm cushion-shaped watch on the regular, I do love the combination of the blue-to-black gradient of the dial and the stealthy black DLC case. This is one of the best-looking new sports watches I’ve seen in some time, and in person, I think it’s the best-looking watch Panerai came out with in 2019. I’d love to see a similar design approach taken to a 42mm Submersible.
Though the name Luminor has officially been dropped from new Submersible releases, the crown protector and case that have come to characterize the Luminor are still here with full force. The bezel of the watch that we are reviewing here is made from DLC titanium just like the case, and along its sides, the bezel has aggressive knurling that should make turning the bezel a breeze even once you’ve suited up for a dive and put gloves on. With the placement of the crown and its hulking protector at three o’clock, the chronograph pushers kind of had to be placed at the eight and 10 o’clock positions. Incidentally, I’ve found this chronograph layout to be pretty ideal for high-handers like myself. I reach over the watch and actuate the start-stop button with my right index finger, and the reset button with my right thumb.
The P.9100 movement inside this watch is not new, but it does have the distinction of being entirely conceived and built at Panerai, employing the robust build type for which Panerai’s in-house movements, beginning with the P. 2000 series, have long been known. (I don’t think Panerai gets quite enough credit for this. The movements that they have designed and manufactured have taken the philosophy of tool-watch design to heart. Look, for example, it’s unusually robust take on the tourbillon in caliber P. 2005.) The movement is also not a split-seconds chronograph, which you may be forgiven for thinking given the two seconds-like hands emanating from this Submerisible’s central axis. What we have here is actually a flyback chronograph with the chronograph minutes read off of the other, similarly sized hand. The chronograph hours can be counted up to 12 via the sub-dial in the three o’clock position.

The Panerai Luminor Submersible 47 Chrono Paltrinieri Edition back of the case is engraved with the signature of Guillaume Néry in addition to a depiction of the island of Moorea complete with its geographical coordinates and “126 m” (126 meters being the Néry’s record for a free dive on a single breath without the use of weights).

This is a great-looking sports chronograph – my personal favorite among Panerai’s 2019 releases – and one of three Submersible special editions that will offer an experiential component along with the purchase of a watch. The other two are a chance to train with Italian Navy Commandoes with the purchase of a limited edition Submersible Carbotech Marina Militare and an opportunity to join ocean explorer Mike Horn on a seafaring exhibition in Scandinavia with the purchase of the limited edition Submersible Mike Horn. That all three of these timepieces came in the form of a Submersible, and that each is connected not only to a lifestyle campaign or to a look but to a chance to put one’s watch in an extreme situation, while also breaking out the Submersible into its own family, seems to be strong evidence that Panerai is at least as interested in making tool watches that can be pushed to the limits as they are in making slender and elegant takes on the Luminor such as the Due.