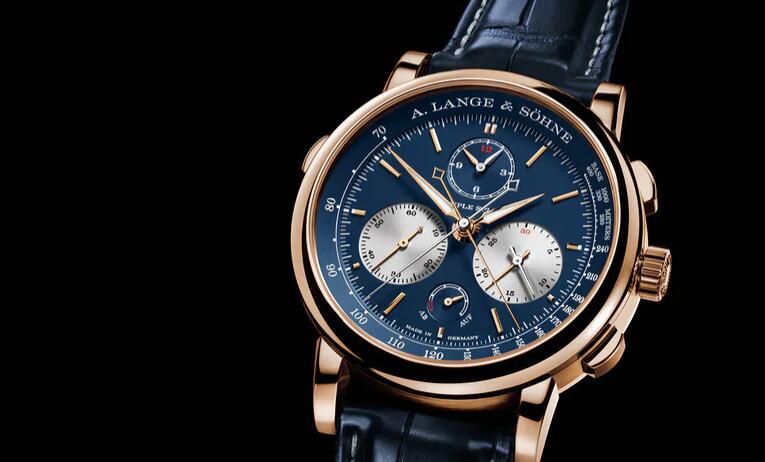 Back in the days of the January SIHH show in Geneva, Lange would present one watch per year as an approximately 15-foot tall scale model at the very center of the brand’s booth. It was a literal monument to the watchmaker’s greatest horological achievement of the year. In 2018, the monumental watch was the Triple Split, a show-stopper that took its famed Double Split to the next level, offering a split-seconds chronograph that could simultaneously measure two times up to 12-hours long. It was a world first, and it got watch lovers talking.

A little more than three years later, Lange is back for more, with another limited edition A. Lange & Söhne Triple Split , this time in pink gold and with a blue dial. It’s a warmer, richer-looking successor to the original’s all-silver-everything vibe. On the technical side, nothing has changed. The watch is still relatively large at 43.2mm across and 15.6mm thick, and it’s still powered by the absolutely insane caliber L132.1. The front of the watch is plenty beautiful, but it’s that view through the sapphire caseback that gets me.
We had a lot of thoughts about the A. Lange & Söhne Triple Split when it first came out in 2018, and most of those still hold true. This is still a mega watch from a brand that isn’t short on category-defining pieces, and it’s one that makes a genuine technical contribution to contemporary watchmaking.

Personally, while I’m usually a fan of monochromatic, slightly austere watches, I prefer this new pink-and-blue configuration to the original. The watch is so highly technical that a bit of poetry makes it feel more relatable. This is a grand complication that invites you in, rather than pushes you out.

One thing worth noting here is that after the original A. Lange & Söhne Triple Split was released, there was a lot of chatter in the collector community that Lange was experiencing some production issues with the movements. Delivery of the original pieces was delayed, though they did eventually start making their way to collectors.

That must all be well in the past, with Lange doubling down on one of its most complicated watches to date. And that’s good news whether you’re buying or not. Technical watchmaking at this level is something everything enthusiast should cheer.