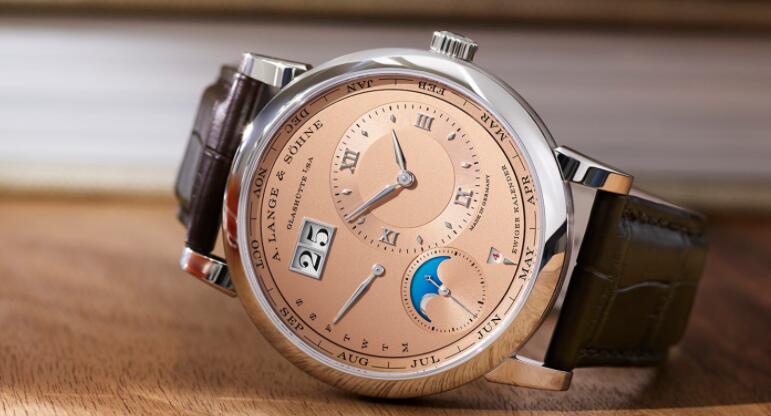 This right here is the first A. Lange & Söhne Lange 1 Perpetual Calendar that doesn’t come paired with other high complications. It feels crazy to say that, since Lange has been making Lange 1 watches for 27 years and perpetual calendar wristwatches for 20 of them. But ever since 2001’s original Langematik Perpetual, this complication has always appeared using other design languages or teamed up with tourbillons and chronographs. Today, Lange introduces its latest high complication, but ironically, it comes in the form of a pared-down rendition of watches we’ve admired for years.

You’ll notice that to complement the Lange 1 architecture, Lange had to create a different kind of QP display. The date is Lange’s signature big date, the day of the week takes the place of the retrograde power reserve, the month is shown via a ring around the dial’s outer edge, and the leap year counter is a small window at six o’clock. To that you can add a combination moon-phase and day/night indicator in the seconds sub-dial. The result is a watch that displays a lot of information, but with pretty low visual density, making it legible and handsome at the same time. All of this is made possible by the caliber L021.3, which is based on the L021.1 that you’ll find in the Lange 1 Daymatic, with the perpetual calendar works added to the mix.

Lange offers two iterations at launch. First up is a pink-gold model with a dark grey dial. This is a combination that has worked well for Lange in the past and makes a lot of sense here. Second is a limited edition model in white gold with a solid pink-gold dial (that reads as what most collectors call “salmon” – though Lange seems to prefer avoiding that moniker). Only 150 numbered pieces are being made of this version, and we’d expect them to go pretty quick.
No joke, when I first read the press release for this watch, I thought I was misunderstanding something. “Wait, Lange hasn’t ever made a no-nonsense Lange 1 QP?” I muttered to myself like an insane person. Turns out, no, they hadn’t. We’ve seen plenty of handsome Langematik Perpetuals, Richard Lange Perpetuals, and even Lange 1 Perpetuals with other complications, but not the plain-jane version of this not-so-plain-jane watch. Now is as good a time as any to fix that, and Lange’s done so with two watches that both have me counting my sadly insufficient pennies.

There’s a lot to love about these watches, and most of them are the kinds of things I like best in complicated watches: Things that look simple and might go unnoticed, but are total game-changes. First off, all of the calendar indications on this watch jump instantaneously. This makes for some pretty fun midnight viewing at the end of a month, one of the simple joys of owning a watch like this. Then there’s that moon-phase and day/night indicator, which I think adds a lovely bit of poetry to an otherwise technical watch. And then you look at the dimensions: This watch is a hair under 42mm and just over 12mm thick, making it extremely wearable, especially when you consider how much is going on under the hood. Speaking of which, there’s a new winding system that uses a platinum weight at the rotor’s outer edge and is both more efficient and easier on wear-and-tear.

Finally, Lange nailed the two colorways here. The grey-on-rose has become something of a signature for the brand over the years, and I think it’s the perfect balance of traditional and contemporary. It’s a watch that looks of-the-moment now, but should age well too. The salmon-on-white, on the other hand, is extremely on-trend right now and I’d expect the 150 pieces to be sold two or three times over by the time anyone reads this – even at six-figure prices. That’s a lot of pennies.

A. Lange & Söhne Lange 1 Perpetual Calendar first unveiled the Lange 1 Tourbillon Perpetual Calendar in 2014. Still the most complicated Lange 1 in the line up, the watch combined an instantaneous perpetual calendar with a discreet tourbillon only visible on the back side.

Fast forward seven years later, Lange finally unveils a simplified version – but still a complicated watch – the Lange 1 Perpetual Calendar, now without the tourbillon. Two variants are available: in pink gold with a grey dial, or in white gold with a solid pink gold dial.
At a glance, one can be forgiven for thinking this is another version of the Lange 1 Perpetual Calendar Tourbillon. It is, however, a completely new model that distills the design to focus on a fascinating perpetual calendar, without the added complexity and cost of a tourbillon.

In typical Lange style, there were no shortcuts taken: the watch is powered by a new(ish) movement, rather than the same calibre minus the tourbillon. The removal of the tourbillon makes it more accessible, but the new watch is still a hefty €98,000 with the grey dial (and a bit more for the pink gold). At the same time, it might dilute the status of the pricier, flagship tourbillon variant.

Nevertheless, the A. Lange & Söhne Lange 1 Perpetual Calendar is intrinsically an exemplary perpetual calendar – in both construction and design – especially the pink gold dial (or “salmon”) being a trendy colour that would likely be the more popular choice.
The dial is the classic Lange 1 layout, with the off centre sub-dial for time, balanced by the big date and moon phase. The big date at 10 o’clock indicates this is an automatic movement, as a manual-wind Lange 1 has the date at two o’clock.

Most important is the unconventional perpetual calendar, which instantaneously changes around midnight. Instead of the typical sub-dial, the months are indicated via a ring around the entire dial, and read via a small gold pointer at six o’clock.
The layout isn’t new, being it is identical to its predecessor, but there are two distinct differences visible.

Most importantly, the day-night indicator is now integrated into the moon phase – a complication borrowed from the 2017 Lange 1 Moon Phase. Here the moon and disc are separate, with the disc changing colour to indicate the time of day.

While not the first brand to use such a display, Lange’s implementation of the concept is arguably the best, with the metallic blue disc behind the moon phase executed in a graduated colour to represent night and day.Also, the sub-dial for the hours and minutes have been redesigned to match the Lange 1 Moon Phase – the time display has a raised, flat central section surrounded by a recessed chapter ring with fine concentric engine-turning. And of course, the dial no no longer carries the “Tourbillon” inscription.The Lange 1 Perpetual Calendar is powered by the new L021.3 – an automatic movement based on the movement in the Lange 1 Daymatic, which also served as a base for the tourbillon version. However, much like the recent A. Lange & Söhne Lange 1 Perpetual Calendar Timezone that has a reworked movement similar to its base, the L021.3 is significantly different, both mechanically and visually.
The perpetual calendar mechanism is integrated onto the base plate under the dial, and is virtually identical to the module on the tourbillon variant – a good thing because it is a technically unique and intriguing instantaneous perpetual calendar with an unconventional layout. The subtle difference between the two calendar mechanisms are the additional wheels to relocated the 24-hour sub-dial to the moon phase, so that it can serve as the day-night indicator.

The most notable difference is the rearranged going train, which now has the fourth wheel directly driving the seconds hand – the Daymatic instead had an indirectly-driven seconds – leading to a more straightforward, efficient gear train. Also, the unidirectional automatic winding mechanism has been redesigned. These changes lead to reshaped bridges, which are now less cluttered and expose more of the wheels underneath.

Like the Daymatic, the L021.3 still retains the gorgeous 21k gold rotor with a relief-hammered tremblage finish that’s rimmed in platinum. And there are five screwed gold chatons for the pivots of the main wheels, which are occasionally absent on some entry-level automatic Lange movements.