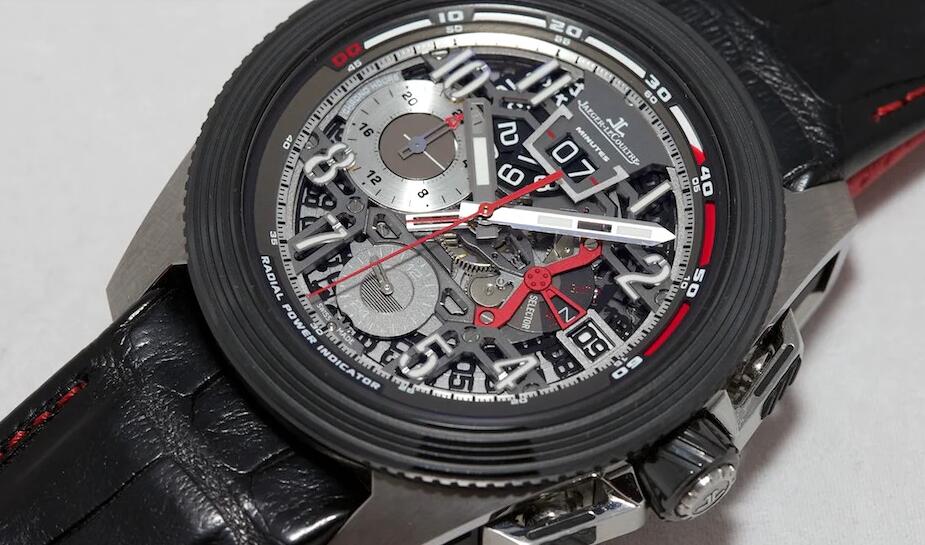 The Extreme LAB 2 is JLC’s successor to the revolutionary Extreme LAB, a technological tour-de-force released in 2007. A mechanical watch requiring absolutely no lubrication over its lifetime, the original Extreme LAB showcased what the JLC manufacture is capable of when it flexes its muscles. Reflecting the innovation within, JLC’s two Extreme LAB watches also feature high-tech aesthetics with case and dial designs unlike any others within their product portfolio.Jaeger LeCoultre created the Extreme LAB 2 as a tribute to a historical watch from its past, the Chronomètre Geophysic. Launched in 1958, the same year NASA was formed, the Geophysic was introduced during an era in which the planet’s limits were being explored like never before. A certified chronometer, it was a robust tool watch intended for scientists’ use in extreme environments while conducting geophysical experiments around the world.Like the original from 1958, the Extreme LAB 2 was built for use in high-stress environments. The case is surprisingly complex, comprised of two major parts and an additional 141 smaller components. Made of a special titanium and vanadium alloy exclusive to JLC – TiVan15 – the outer case is 15% more scratch resistant than one crafted from traditional titanium. The two-part, sandwich-type construction improves the overall sturdiness, while the titanium alloy reduces weight. It’s fitted with a highly scratch-resistant, sculpted bezel made of black zirconium ceramic; a diamond is about the only thing that will scratch this.Eye catching grooves, forms, and nooks with satin and polished surfaces are found on the sides of the case. On the right side, the chronograph’s round pushers are protected by L-shaped, rubber coated “security arms”. Large and muscular in appearance, the pushers are engaged through these pivoting arms for ease of use, even when wearing gloves.A pusher integrated within the ceramic crown allows the user to select one of three positions: 1. winding (confusingly labeled as N for neutral), 2. GMT function adjustment and date setting, and 3. timesetting. The tactile feel of the crown’s pusher, like the chronograph’s pushers, was crisp, tight, and precise with every push.To allow precise time setting, on the left side, a two-action, rubber-coated slider hacks the movement (stops the running of the balance wheel). It’s engaged by simultaneously pressing and switching down the slider, requiring significant force to do so.

Thanks to relatively short lugs and an ergonomically curved caseback, the large, 46.8 mm diameter case wears well, even on a small, 6.75-inch wrist like mine. Its thickness, at 16.5 mm, makes the watch susceptible to impacts if one isn’t used to such a large watch. Fortunately the ceramic bezel, the case component most likely to be hit, can easily withstand impacts and an inner case protects the movement.A transparent, sapphire crystal dial allows a full view of the in-house, JLC caliber 781. The bridges used on the top side (aka bottom plate) of the movement are black PVD nickel, with one red colored bridge at 3 o’clock for the function selection indicator. These dark movement colors provide excellent contrast to the polished and faceted skeletonized steel hands and Arabic hour markers, making readability high.The number of indications on the dial illustrate just how complicated the Extreme LAB 2 is. Around the dial’s outer circumference is a patented radial power reserve indicator. The state of wind is clearly and instantly communicated – when the power is full, it indicates all white; as the power reserve is released (up to 60 hours worth) red consumes the indicator until it fills the entire semi-circle. Fantastic!Of course, the Extreme LAB 2’s main complication is a chronograph, distinguished by a jumping digital minute counter at 12 o’clock. The chronograph’s hour counter is large and prominently positioned at 9 o’clock, sharing the same position as a concentrically located timekeeping seconds indicator disk.

The Extreme LAB 2 includes a GMT function, or second time zone, indicated with a second, shorter, red-accented hour hand and associated 24-hour sub-dial at 6 o’clock.Without a doubt, the most fascinating feature of the Extreme LAB 2 is its jumping minute counter. With two fully visible disks, it is exciting to watch the transitions occurring every minute while the chronograph function is engaged. As the red chronograph hand ticks across the 60-second mark, the minute counter immediately makes the transition to the next minute.For me, the complication is a more dynamic and fun variation of a large date indication, such as that found on the Lange 1. A large date complication’s transitions occur only once per day, at midnight, and are rarely noticed unless you’re setting the watch. On the Extreme LAB 2, seeing the “ones” disk changing every minute, and both the “tens” and “ones” disks changing every ten minutes brings the chronograph function to life in a new way.

Speaking of dates, an aperture at 3 o’clock highlights the current date against a white background. A traditional, transparent date wheel is used with black print. The unused dates are visible around the dial, looking like something you might see from Richard Mille.Powering the Extreme LAB 2 is the Caliber 781, an in-house, self-winding movement with a fully integrated chronograph mechanism. All the functions described above require 569 parts, reflecting the extreme complexity of the caliber 781. Like its predecessor, the Extreme LAB, this watch is full of state-of-the art features and innovations.A lubrication-free, free-sprung escapement using silicon parts regulates timekeeping. A large balance wheel, used for improved accuracy, is mounted to a full bridge secured at two points for stability. During my tests, I observed nothing short of impressive accuracy. By the end of seven days of continuous use, the watch was ahead by 31 seconds – an average deviation of less than 4.5 seconds per day.The self-winding mechanism uses ceramic ball bearings, and also requires no lubrication over its lifetime. The winding rotor, secured by three skeletonized arms, uses a solid platinum mass for increased inertia. The bridges visible through the sapphire case back are also skeletonized and feature straight-grained brushed finished top surfaces treated with ruthenium.The chronograph uses a vertical clutch coupling mechanism, which allows the chronograph to be run continuously with no decrease in timekeeping accuracy or increased parts wear. Two column wheels are used, one for the chronograph, and a second for the crown’s sophisticated function selector.

Unfortunately, one minor problem surfaced during my week-long trial: the chronograph’s jumping minutes counter disk became misaligned. The counter continued to function, jumping at every minute, but the misalignment couldn’t be corrected. It had to be sent to JLC for an adjustment and they fixed it no problem. It’s important to note that this watch was not factory fresh – it was previously worn – but in mint condition as the photos illustrate.The Extreme LAB 2 features a proprietary, simple-to-use interchangeable strap system, and is sold with two straps. I wore it on a thick, black and red, “double” alligator strap – by far, the coolest leather strap I’ve ever seen.

The upper half of the strap is large-grained black alligator with red stitching, and the lower half is red, perforated leather inset with rubber grips. By sliding open a small covering on the caseback, the strap can be quickly removed and replaced with the included rubber strap. A wonderfully sophisticated double pin buckle allows fine adjustments for optimal wrist fit.The Extreme LAB 2 is bold, masculine, and jam-packed full of state-of-the-art watchmaking innovation. With over 700 parts, it’s superbly complicated, yet simple to read and a pleasure to use. Original, high-tech aesthetics and a large case size make it standout from all other watches made by Jaeger-LeCoultre, a legendary brand known by many as “the watchmaker’s watchmaker”. Jaeger-LeCoultre Master Compressor Extreme

I highly recommend the Extreme LAB 2. At a retail price of $51,100 as of this writing, I can’t think of any other mechanical watch near this price range offering so much: an in-house, integrated chronograph, silicon escapement, and a fascinating digital jumping minute counter complication.