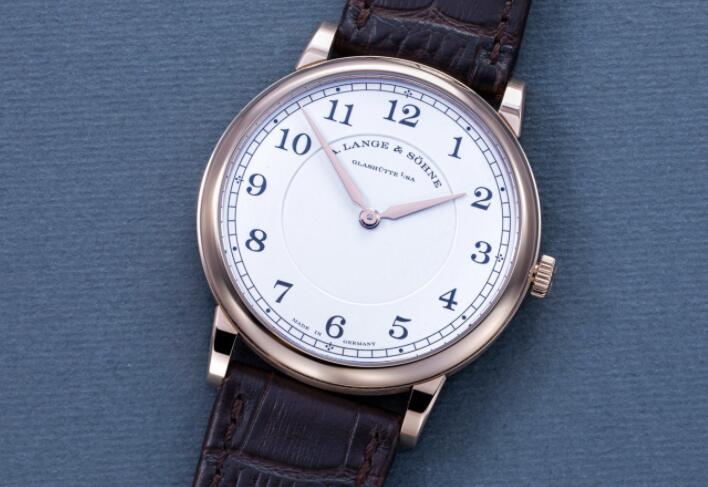 Unveiled earlier in the year to mark the 175th anniversary of the founding of A. Lange & Söhne, the 1815 Thin Honeygold “Homage to F.A. Lange” is one of a three-piece set created for the occasion, along with the Tourbograph Perpetual and 1815 Rattrapante.

Though it’s the largest run in the anniversary line up, the 1815 Thin is a limited edition of just 175 pieces. And though Lange has made several limited editions in Honeygold – which costs substantially more than ordinary gold to machine – the cumulative number of watches in the metal is fairly small, at just over 1,000.
The 175th Anniversary “Homage to F.A. Lange” trio in Honeygold – (from left) 1815 Thin, Tourbograph Perpetual, and 1815 Rattrapante

Enamel dials are also uncommon for Lange, and decidedly rare in a time-only watch. The last time Lange offered a time-only watch with an enamel dial was 19 years ago with the Langematik Anniversary. All recent watches with enamel dials are complicated and expensive – like the 1815 Tourbillon or one-off Homage to Walter Lange in steel – or extremely complicated and extremely expensive.
Beyond its intrinsic features, the watch also looks good on the wrist. At 38 mm it is sized just right, unlike its bigger counterpart that feels a bit too wide relative to the thinness of the case. And though the dial is a stark white expanse, it looks interesting enough thanks to the contrast between the colours of the case and dial.

One weakness of the watch is a philosophical one – ultra-thin watches are not quintessentially Lange, a brand better known for its complicated and heavily engineered watches. And by the same token, the movement, while finely finished and attractive – replete with details like the polished teeth of the exposed wheels – is straightforward and not particularly interesting.
More broadly, the concept of the 175th anniversary editions make sense, since 175 years is an anniversary that makes sense to celebrate. The 165th anniversary of a decade ago was a peculiar milestone to commemorate, and perhaps driven by the need for a hit product in an economically-difficult period, coming just after the financial crisis of 2008.

In summary, for the US$35,000 or so retail price, the 1815 Thin is a compelling buy.
First used a decade ago in the 165th Anniversary Homage to F.A. Lange set, Honeygold is a gold alloy that’s a visually a cross between yellow and rose gold. It has an unusual colour that’s a little more muted than ordinary gold alloys, while also having a magenta tinge under certain light.

Beyond its colour, the metal also has useful physical properties. According to Lange, Honeygold is created by alloying gold with silicon, along with other metals, which also results in increased hardness. That in turn renders Honeygold cases far more costly to fabricate. Lange development chief Anthony de Haas once explained to me that the drill bits used to mill Honeygold cases wear out at the same rate as those used for platinum cases, explaining the price premium relative to yellow gold.

The metal’s appeal also lies in its uncommon nature. Exclusive to Lange in watchmaking – the alloy is presumably supplied by a specialist that sells it to firms in other industries – Honeygold has only been used for the cases of 1,325 Lange watches, an exceedingly small number over a decade.
Material aside, the case is traditionally Lange in style. It features a brushed case band against a polished bezel and lugs, along with details that refine the look, namely the chamfered edges of the lugs as well as the small step at the base of the bezel.

Notably, the back is secured with screws, a more robust set up that’s the norm for all Lange cases, instead of the snap-on back that is typical for ultra-thin watches since it helps reduce the minimum case thickness.
The dial of the watch is a bright white enamel that’s done well, with a smooth, glossy surface and neat printing. Admittedly the dial isn’t extraordinary, but the quality is excellent.
Recognisable as a Lange movement, the L093.1 is nonetheless different from the typical calibre. It’s been decorated in a style unique to the 175th Anniversary watches.

Two elements set it apart in an obvious manner – the frosted finish on the three-quarter plate, instead of the usual striping, as well as the grey-lacquer filling of the engraving on the plate as well as balance cock. The result is a look that’s slightly more muted than the average Lange movement – and more evocative of 19th German century pocket watches – but still as refined, especially in its details.
Though the movement is simple, everything is properly decorated. The border between the frosted top of the three-quarter plate and its polished bevels is particularly fine, and interrupted only by the black-polished cap for the escape wheel jewel. A handful of other details stand out, including the jewels for the going train, all of which are in screwed gold chatons, as well as the finely-shaped regulator index.
But movement nerds will note the most unusual detail – the exposed crown and barrel ratchet wheels. Hidden under the three-quarter plate in nearly all other Lange movements, the two wheels are visible due to the slimness of the movement, which dictates a construction that reveals the two wheels.
While unusual for Lange, the two exposed wheels bring the advantage of being able to admire two well-finished components that are ordinarily hidden. Both the winding click and click spring are black polished, while the wheels are circular grained while also having bevelled, polished teeth.

The two wheels are also finished differently here as compared to the standard version of the L093.1, which has its wheels finished with radial graining. The circular graining on the anniversary version of the movement is arguably more appealing visually, as it renders the finishing on the teeth more obvious.
The 1815 Thin is an extremely simple watch, but one that is executed well and expensively, both in terms of materials and finish. Despite that, it is priced well. It’s not quite affordable, but is certainly accessible for a Lange, and one of the best values in terms of high-end, time-only watches for the year.