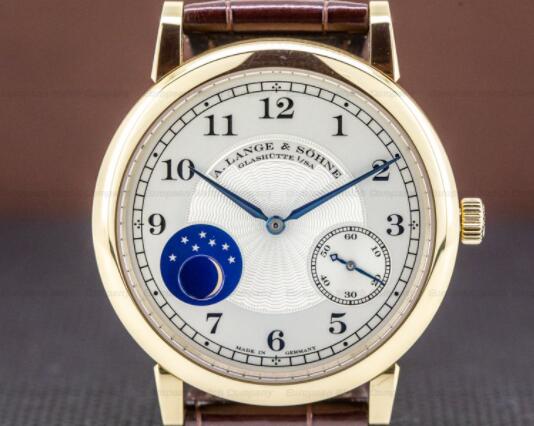 This is an extremely rare and complicated A. Lange & Sohne 1815 Moonphase Homage to F.A. Lange 212.050. It has an alligator leather strap with an 18K honey gold tang buckle, and a scratch resistant sapphire crystal. The 37.5mm diameter solid three-body case, downturned lugs, and flat slightly rounded bezel, are polished.The dial is solid silver with a fine sunburst guilloche texture in the center, with black Arabic numerals and blued hands. It has a recessed indigo moonphase subdial with silver stars, located at 8 o’clock. and there is a running small seconds indicator at 4 o’clock. Around the perimeter is a black railroad-style minute scale. The moon-phase complication on this watch is rather incredible all on its own. The indication only needs to be adjusted by one day every 1058 years as long as the power isn’t interrupted and the watch remains set to the correct time. The Lange & Sohne engineers invented a moonphase train that supersedes the traditional approximation of a 29.5-day lunar month, using a far more accurate, synodic month of 29 days, 12 hours, 44 minutes, and 3 seconds. The case back is a transparent sapphire crystal for viewing the mechanism and there is a 45-hour power reserve. It’s water resistant to 30 meters/100 feet, and the 9.5mm thick case, dial, and movement are signed.

This A. Lange & Sohne 1815 Moonphase Homage to F.A. Lange 212.050 has a mechanical manual winding ALS caliber L943.2 movement. It’s constructed with 26 jewels, 220 components, and the Balance Cock is made of the same 18K honey gold as the case, and with intricate hand engraving.

Walter Lange introduced the A. Lange & Sohne 1815 Moonphase Homage to F.A. Lange 212.050 in 2010, in a limited edition of only 265 examples. It was created in honor of his great grandfather, Ferdinand Adolph Lange, who founded the company in 1845. 2010 marked the 165th anniversary of the company; the homage year of 1815 was the year of Adolph Lange’s birth. The case material for this watch and only two other models is made of a special gold alloy developed exclusively for Lange called 18K “Honey Gold. It’s a subtle tone between yellow and white gold, but with a hardness on the Vickers scale of over 300, making it twice as durable and scratch resistant as other gold alloys.