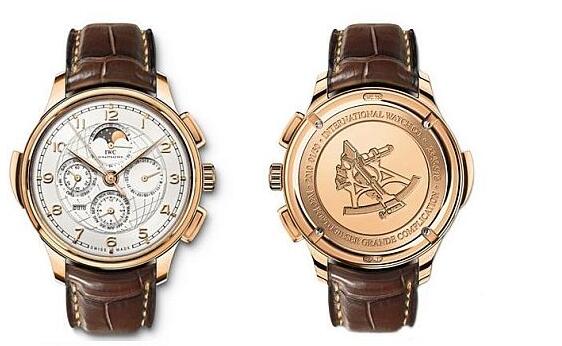 The IWC Grande Complication from IWC Schaffhausen, which brought the highest horological complications together in a wristwatch as a world-first precisely twenty years ago, now appears for the first time in a Portuguese case. It also retains its impressive technical inventory: perpetual calendar, minute repeater and chronograph with automatic movement.

Vasco da Gama’s flagship, on which he sailed around the Cape of Good Hope more than 500 years ago and discovered the sea route to India, was the caravel Nau São Gabriel. The new flagship of the most celebrated family of watches from IWC is the IWC Portuguese Grande Complication. This is the superlative watch from IWC, which in 1990 was the first manufacturer to bring together the highest horological complications and to make them “wearable” as a wristwatch. A timepiece of the highest prestige and a solitaire in the collection, which is limited to 50 numbered examples annually. This masterpiece now has a new home inside the Portuguese case – and a new face.

Grande Complication – lying behind this title of distinction in the world of Haute Horlogerie is the ancient dream of making the most significant discoveries of the watchmaker’s craft oscillate, run and even chime together. Precisely twenty years ago, the engineers at IWC realized this dream, a feat that brought worldwide acclaim to the manufacturer. It took more than seven years of intensive development work in Schaffhausen before 657 individual parts could be assembled together in the smallest possible space in order to bring to fruition a perfectly functioning whole, which, in spite of its complexity, is characterized by its ingeniously simple operation and total suitability for everyday use. Only the most talented designers and master watchmakers can accomplish this. And that is why the range of such exceptional achievements has been very limited to this day.
The Replica IWC Portuguese Grande Complication, for which a new case with a diameter of 45 millimetres has been created, inherits an extraordinarily wellproven technical inventory: the 79091-calibre chronograph movement with automatic winding and aggregate time recording up to 12 hours, the minute repeater – a complication specially constructed at the time – which belongs to the most modern and reliable mechanisms of its kind and, last but not least, the autonomous perpetual calendar. It also shows the wearer the year, decade, century and millennium in a four-digit display, as well as the day, date and month, in a way that is unsurpassed to this day. A perpetual moon phase display, with a deviation of only a single day in 122 years from the actual cycle of the moon, is connected to the calendar, which requires no adjustments or interventions on the part of the wearer until the year 2100 and advances all the calendar indications in a mechanically programmed and synchronous manner.

The previous iwc Grande Complication, which will continue to be built in parallel, already possessed water-resistance to 1 bar thanks to the patented slide mechanism; in the case of a minute repeater, this is almost equivalent to squaring the circle. In the new Portuguese Grande Complication, the water-resistance has been increased to an impressive 3 bar. The new flagship of this watch family is entirely in keeping with the spirit of the Portuguese seafarers, and this can also be seen in engraving on the back of the red gold case. A sextant, which is an indispensable instrument of nautical navigation alongside the watch, is a reference here to this spiritual affinity.

The substantially larger silver-plated dial provides a perfect setting for the calendar indications of such a complex watch. Against the background of a discreetly engraved globe with its degrees of longitude and latitude – positioned, incidentally, in the correct 23.4-degree angle of inclination of the terrestrial axis – the counters for the chronograph and the calendar indications are accommodated in addition to the small seconds and the moon phase display. A shaped sapphire glass that has antireflective coating on both sides arches over the dial with its solid red gold appliqués, Arabic numerals for the hours and railway track-style chapter ring. The rectangular, lightly bevelled operating buttons of the chronograph capture the understated style of the Portuguese case. Only the slide on the left side of the case, which “makes the music”, reveals to an expert the nature of the precision mechanical refinement that is concealed inside this watch with its minute repeater. Speaking of which, in spite of the increased water-resistance of the case, the loudness and the balanced sound quality have not been impaired. This is assured not least by the larger sound chamber and a cleverly engineered solution, which utilizes the sapphire glass for transmission of the sound to the outside. Cast off – for the new flagship of the Portuguese fleet.
The new holy grail IWC Grande Complication watch is here. IWC has taken their famous “easy to read but complete” perpetual calendar watch with moon phase and year indicator, that also has a minute repeater, placed it in a Portuguese style case, and updated the dial a little bit. You know how the most sober looking ultra complex watch out there. It is hard not to like the looks and appreciate all that it does. It isn’t cheap though!