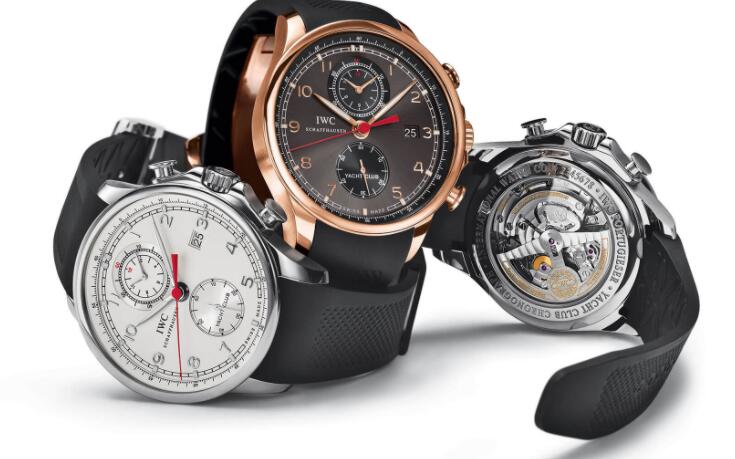 The IWC Portugieser Chronograph is one of IWC Schaffhausen’s most iconic models. With its compact diameter of 41 millimetres, it fits almost any wrist. However, the thin bezel gives one the impression of wearing a significantly larger watch. The clear, functional dial boasts applied Arabic numerals and slender Feuille hands.
One of IWC’s most emblematic timepieces, the IWC Portugieser chronograph Replica has been a cornerstone of the brand’s collection for many years. These days a paradigm for the timeless, well-proportioned and clean watch, the Portugieser, which first appeared back in 1939, has not always been a bestseller.

The truth is, IWC failed with three separate launches before the Portugieser finally became a success in the early 1990s.
In 2020, for the first time, IWC has outfitted the Portugieser Chronograph with an automatic manufacture caliber, offering the sought-after timepiece in six intriguing new executions, each with its very own charm.

Let the voyage begin!
What attracted me to watches in the first place was neither their state-of-the-art technology nor their aesthetics, but rather the fact that some of them have really interesting or even fascinating stories to tell.

In my view, that is the reason why some of the real icons and most sought-after models that often draw upon decades of existence have not lost their charisma over time.

Today, storytelling is probably the most powerful marketing tool that savvy brands use to create emotion to catch their target groups’ interest and spark curiosity so that ultimately they will be inspired to buy the watch. Nearly every post on social media, especially those from influencers, tries to establish a story line.

I feel that many of these fabricated images are neither true nor credible, which is why I appreciate old-school stories that are authentic.

And one such story is the IWC Portugieser, a picture-perfect example of a maritime-inspired timepiece infused with the values needed for navigation aboard vessels. It’s a story with ups and downs that started roughly 80 years ago with the request of two Portuguese wholesalers from Lisbon, Messrs. Rodrigues and Antonio Teixera, who approached IWC with the request for a “big” wristwatch in a stainless steel case.

The fashion of this period was dominated by small, filigree timepieces, often decorated with stylized, two-dimensional portrayals of floral and organic motifs in typical Art Deco fashion. So IWC’s management was somewhat confused and asked the Portuguese gentlemen whether the request could have been an error.

IWC management stressed that they had timepieces outfitted with their Calibers 62, 83, and 87, manufactured expressly for use in wristwatches, which powered, among others, the then very fashionable tonneau model.
But the two gentlemen insisted that their customers had requested a “real” wristwatch as precise as a marine chronometer but could be worn on the wrist. As the customer is king, IWC’s managers brainstormed for a solution.

They came up with the idea of putting the existing pocket watch caliber, 74H4, a savonette with subsidiary seconds positioned at 6 o’clock, into a large case. This movement, first introduced in 1913 and featuring a Breguet overcoil hairspring and a swan-neck fine regulator, seemed to be a good choice.

But at a diameter of 35.8 mm, it was literally as tall as a tree for a wristwatch.

IWC’s engineers conceived a plain, simple case consisting of three parts and outfitted with a big crown that was neither water nor shock resistant.

The dial was very simple, a typical Bauhaus style reduced to the bare essentials with three Arabic numerals, slim leaf-style hands, and a railroad-track-style minute chapter ring; it was literally a marine chronometer in wristwatch form.

IWC called it simply “the big wristwatch.”
In its simplicity, this “big guy” was well ahead of its time. Some industry experts even scoffed: it looked like an oversized frying pan.

IWC produced several “batches” of a few dozen each between 1939 and 1944, but to call it a commercial success would be an exaggeration.

In 1945, IWC updated the timepiece with new versions of its Caliber 97 and 98, based on pocket watch Calibers 67 (lépine) and 68 (savonnette), which featured some of the brand’s most sophisticated technical and aesthetic features like ruby bearings, a slotted bimetallic balance, and the swan-neck regulator.

It proved unsuccessful and only a few hundred models were produced until 1958.
In the early 1970s, IWC made a third attempt with a new generation designed for the German market. Unused cases from the brand’s stores were fitted with IWC’s latest pocket watch movement, Caliber 98.

It boasted shock protection, a mono-metallic Glycudur balance, and, in addition to the swan-neck fine regulator, an eccentric fine adjustment on the balance. Despite the cutting-edge mechanics, it failed.

And that might have been the last chapter of the Portugieser story, but, as is often the case in the world of watches, yesteryear’s gems often serve as the inspiration for contemporary styles.

On the occasion of IWC’s 125th anniversary in 1993, and under the aegis of IWC’s then-mastermind Günter Blümlein, the Portugieser was brought back to life with a new edition of three limited executions in stainless steel, pink gold, and platinum.

Its dial was a faithful re-edition of the original, as was hand-wound Caliber 9828, based on the original Caliber 98 for pocket watches. However, for the first time, the intriguing mechanics could be admired through an exhibition case back, a feature that had become common in the mechanical renaissance beginning in the late 1980s.

Encouraged by this success, IWC decided to clothe two sophisticated grand complications, a minute repeater and a rattraprante chronograph, in the beautiful style of the Portugieser.

The Portugieser Minute Repeater and the Portugieser Chrono-Rattrapante were unveiled in 1995, followed by the Portugieser Automatic in 2000, whose stainless steel case housed manufacture Caliber 5000 with the brand’s Pellaton winding system and an amazing power reserve of seven days.
Yet the most complex member of the family was yet to come: the Portugieser Perpetual Calendar, introduced in 2003.
Developed by Kurt Klaus, the ingenious watchmaker and inventor behind IWC’s perpetual calendar with its now-famous four-digit year indication, the Perpetual Calendar featured a double moon phase display with the moon phases for both northern and southern hemisphere indicated, with increased precision that deviates from the actual course of the moon by just one full day every 577.5 years.

This technical innovation was driven by Caliber 50611, also outfitted with a power reserve of seven days.
In the following years, more grand complications increased the glory of the family, among them three tourbillons, of which one was a mysterious tourbillon and the other a tourbillon with constant force.

Also, 2010’s popular IWC Portugieser Yacht Club Chronograph, resuscitating a model from 1967, and the sought-after Portugieser Annual Calendar, launched in 2015 to commemorate the Portugieser’s 75th anniversary, added to the line’s fame.
The Replica IWC Portugieser Chronograph has been a staple of this collection since its introduction in the late 1990s, radiating casual elegance and becoming a classic in the best sense.

For more than 20 years, it remained practically unchanged, only experiencing some dial variations. The overall perfectly balanced style with bicompax layout, plain Arabic numerals, and slim leaf-style hands surrounded by a notably thin bezel have not yet been altered to this day.

The same rings true for the Portugieser’s automatic Caliber 79350, a modified ETA Valjoux with small seconds, a chronograph with 30-minute counter, and hacking seconds. The only exception was a limited edition launched for the 150th brand anniversary in 2018 that was equipped with in-house Caliber 69335.
This very movement with column-wheel control of the chronograph and bidirectional pawl-winding system, which also sets the pace within the Ingenieur Chronograph and the Spitfire Chronograph, serves now as the motor for the Portugieser Chronograph. Its openworked rotor, Geneva waves, and circular graining decorations are visible through the sapphire crystal case back.

IWC offers a great choice of colorways of the non-limited chronograph: six executions are available in stainless steel or red gold with silver, blue, and black dials for the steel versions as well as silver or slate grey for the gold.
The latter is my personal favorite as the dial color goes beautifully with the warm hue of the red gold, building a noble background for the slightly recessed subsidiary counters in deep black.

Also, the gold variations come on a genuine Santoni leather strap. In my view, the redesign was a smart choice for IWC, for a manufacture movement certainly adds value and authenticity to this icon.