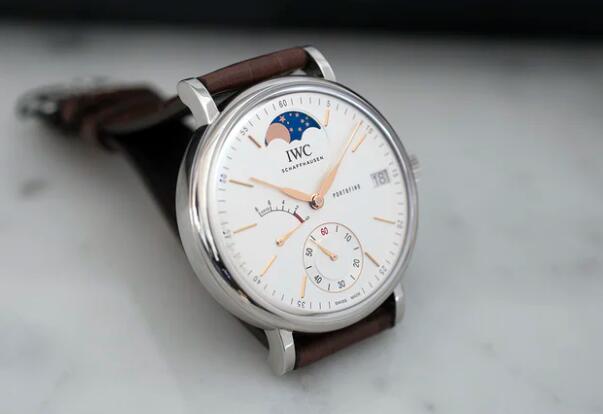 The Replica IWC Portofino Hand Wound Moon Phase in stainless steel pays homage to the first Portofino from 1984, which also had a moon phase display. It is powered by the hand-wound 59800-calibre movement, which has a power reserve of 8 days when fully wound. The silver-plated dial with moon phase display, date, small seconds and power reserve display is simple and balanced.
These “IWC Portofino Hand-Wound Moon Phase” (References below) are powered by a hand-wound mechanical movement, caliber 59800 with 30 jewels and 28,800 vph. Power reserve on this watch can last up to 192 hours (8 days), when fully wound. The moonphase module on this watch only requires adjustment by one day, after running for 122 years!
· The dial of the IWC Portofino MoonPhase replica 5164 is a sumptuous combination of restraint and complexity. For the first time in more that 30 years the moon phase complication features on a larger 45mm Portofino case size (smaller Portofino references at 37mm have previously featured a moon phase).
The new IWC Portofino Hand Wound Moon Phase is a great looking watch, perfect for every day wear (particularly in steel and especially if you have the wrists to pull it off.) Plus, it’s really nice to see a moon phase complication back in the classic Portofino case.
There’s a very good chance you’ve never heard about this watch, nor seen any pictures of it, despite the fact that it’s not some brand new release dropping today. And why might that be? First off, it’s not even on IWC’s website. So you can imagine my surprise when, flipping through IWC’s 2016/2017 catalogue, I landed on this watch. Immediately I knew I had to get my hands on one to take a closer look.

The reason IWC hasn’t talked about it until now – and I suspect that will change very soon – is because the company likes to focus on one collection at a time. When it comes to new product launches, that’s been the strategy at IWC for a number of years. So when it re-launched the Da Vinci line at the SIHH in January, that’s what was the press was shown, almost exclusively. But, very quietly, IWC also launched a new Portofino, the ref. 5164, and it’s one good looking watch.
Not bad, right? In my opinion, it’s probably the best thing IWC has released so far this year. The new Da Vinci line was always going to receive mixed reviews, and it did, while the very many complications presented in the new Ingenieurs tried to please everyone but didn’t exactly knock it out of the park. This new 45mm Portofino on the other hand? It truly has a lot going for it.
First of all, it has a moonphase complication. It’s the complication the Portofino was born with, more than 30 years ago, and its one the current line-up has been desperately missing – it has been available on the Automatic Moon Phase 37, but that also only comes with diamonds on the bezel and/or dial, so it’s a different story. It’s reappearance in a large case Portofino is therefore a bit of an event.
The original Portofino, reference 5251, was a very large watch due to its movement. It was powered by a pocket watch movement, which IWC turned 90 degrees and equipped with a moonphase display. You could call it a wristwatch, and officially it was, but only because the movement was placed inside a case with lugs and a leather strap, which meant it could be worn on the wrist. In character (and size) it was very much a 19th-century pocket watch.
The new IWC Portofino Hand-Wound Moon Phase on the other hand, is very much meant to be a wristwatch. The movement inside is the same base movement found inside the new Portofino Hand-Wound line-up, which includes the ref. 5101. Just like that more basic model, this watch features a small date at three o’clock, small hacking seconds at six o’clock, and a power reserve indicator at nine o’clock (for the eight-day, hand-wound power reserve). But in addition to all of that, you get a beautiful moon phase display at 12 o’clock, and it totally changes the watch.
Because of the moonphase module, the case gains 1.5mm in height, but that’s where the changes end. It’s a big watch, for sure, but that’s kind of the point. I’m sure the new IWC Hand-Wound Moon Phase isn’t supposed to provide the same experience as the original Portofino, and it works as its own, slightly more compact, wristwatch, but I also happen to like that the two references, which are separated by three decades, are linked by how they wear. Even if you’re not usually into larger watches, there’s something charming about these for sure.