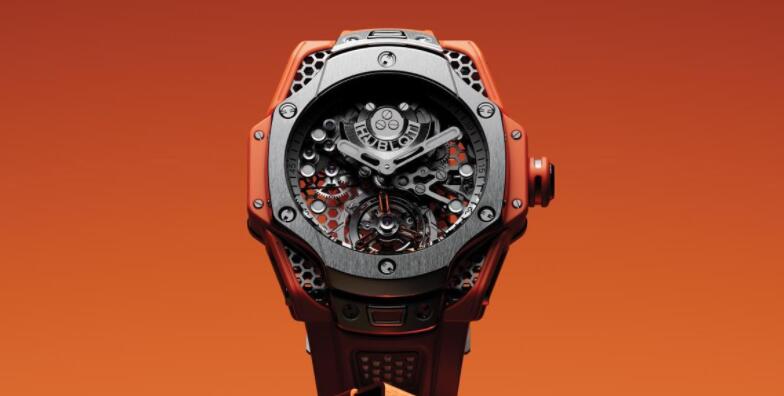 Some of Hublot’s most interesting, exciting watch designs are those made in collaboration with external artists and designers. Richard Orlinski, Maxime Büchi and now Samuel Ross have all left an indelible mark on the DNA of the Big Bang. For Ross’ debut effort, the Hublot Big Bang Tourbillon Samuel Ross, an unmissable new twist on the familiar form.
Samuel Ross won the Hublot Design Prize in 2019 and has been an ambassador since 2020. A fashion designer, artist and creative director, he’s worked with Off-White, Nike, Oakley and founded his own label A-COLD-WALL*. The talented 30-year-old has a skill set that makes him uniquely well-suited to a collaborative partnership with Hublot. In 2020 he unveiled REFORM, a sculpture inspired by Hublot and the Art of Fusion. REFORM was a fusion of granite and steel; an industrially finished artwork that serves as the basis for this 44mm Big Bang.
Ross has evolved the traditional form of the Big Bang, elongating the traditionally blocky shape into a more streamlined, biomorphic form and creating a more cohesive union between the case and the strap. In addition, Ross has honoured the shape of the Big Bang with an extensive honeycomb motif. The open titanium hexagonal lattice is at once technical and natural. Paire with Hublot’s micro-rotor powered tourbillon caliber and plenty of bold orange rubber, Samuel Ross’ design debut with Hublot looks filled with promise.
Hublot Big Bang Tourbillon Samuel Ross has always been something of a polarising brand, and this watch is no different. However, this is a feature rather than a bug, so to speak. Hublot’s genius in providing a platform for talented creators outside of the traditional watch space allows the brand to rapidly and authentically evolve its design language at a pace that far outstrips other brands, even those who operate in a similar space. The future of watch design is here, and it is being spearheaded by people like Samuel Ross, who aren’t watch designers.

Hublot Big Bang Tourbillon Samuel Ross has just unveiled a refreshing take on its Big Bang Tourbillon 45mm. Teaming up with Samuel Ross of A-COLD-WALL*, this new look is characterized by bold orange meshed with satin-finished and polished titanium. A distinct honeycomb pattern can be seen throughout the windows of the strap and flanks of the case, giving the watch a light and sporty presence.

This watch also packs an impressive automatic HUB6035 Manufacture movement with a micro-rotor, three sapphire bridges, three days of power, and a tourbillon at 6 o’clock. The orange continues to enhance the sportiness of the watch as it wraps around the case revealing SR_A branding. The entire back sees a full honeycomb mesh plate showing the jewels, barrel, and other inner components in a new take on skeletonization. Not only is titanium a light and strong metal but its unique shade of gray further compliments the orange.