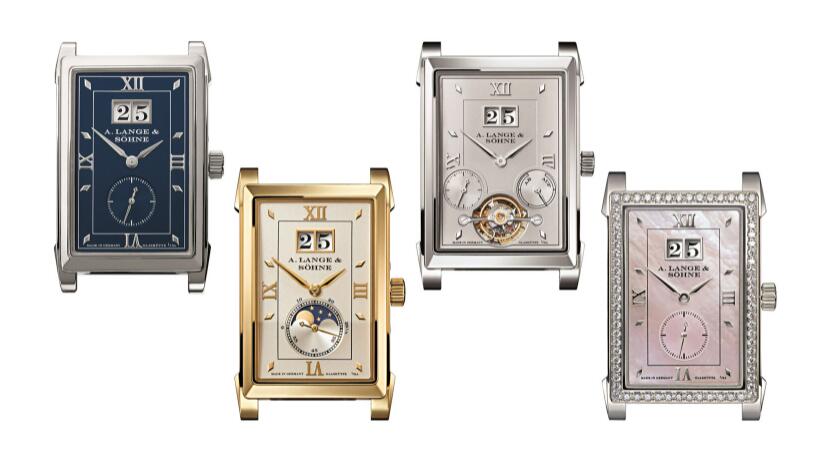 The A. Lange & Söhne Cabaret is one of the less loved models amongst the Lange stable of exceptional timepieces. So when it came to a special edition piece for the Lange Owners Group – a group of enthusiasts held together by serious collectors and admirers of the brand as well as other haute horology brands, we elected to do a special Cabaret.
The A. Lange & Söhne Cabaret has been in the Lange collection since 1997, where a rectangular form movement, caliber L931.3 is used in a rectangular case. This practice of using a form shaped movement is a more purist approach than the short cut taken by many manufacturers of using a round movement within a rectangular case. The special edition was produced for the LOG in 2009, and limited to 25 pieces, each individually serial numbered. The special features are the case metal of white gold, the grey dial, the relief engraving on the caseback, the personalised balance cock engraving and the two movement cocks in white gold.
The A. Lange & Söhne Cabaret movement is built on the typical and classical Glashutte fashion of 3/4 plate, where the entire wheel train is secured under a large bridge covering 3/4 of the movement, and leaving only the fifth and balance wheels with their own cocks. Having a power reserve of 42 hours, the movement has 30 jewels, and in a case measuring 36.3mm x 25.5mm, 9.1mm thick.
The movement is the typical Lange movement, finished exceptionally well. The fausses côtes, or what Lange calls Glashutte ribbing (similar to Geneva stripes) are nicely done. As are the beautifully polished anglage on the movement 3/4 plate. The top plate, technically a large bridge, is held in place by screws which are held in openings which are chamfered and polished.
The pivots of the wheel train are held in place by jewels in gold chatons held by blued screws. This makes a beautiful impact visually, but this technique was also technically significant in the early days of watchmaking. If the jewels need replacement, the watchmaker can remove the jewels by undoing the blued steel screws and releasing the jewels for a new one. However, with modern technology, this is not technically essential anymore, as jewels can be easily pressed into place securely with a machine. In this special edition, the cocks holding the balance wheel and 5th wheel are in white gold. Regular L931 have movement plates have both the 3/4 plate as well as the cock holding the 5th wheel and balance cock are in German silver. Overall, a beautiful watch, under appreciated perhaps, but nonetheless a very significant timepiece, alas, now discontinued.