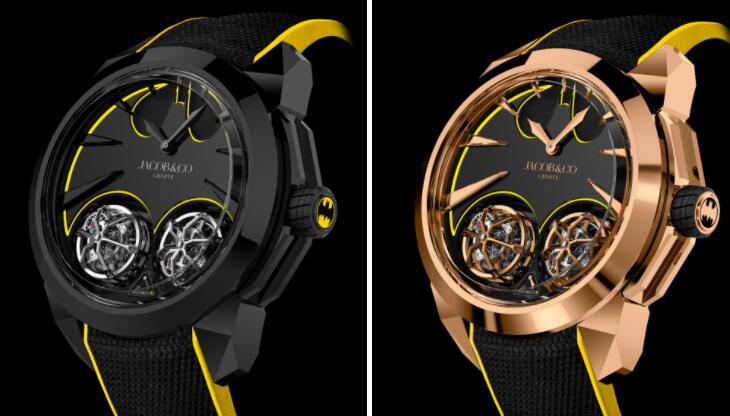 Between Jacob & Co. and Lanvin’s Batman collabs, there’s probably never been a better time to be a deep-pocketed Dark Knight fan.

Emphasis on deep pockets: Jacob & Co.’s Batman-inspired timepieces are especially exclusive. And, offered in a limited edition of 72 (36 pieces per style) at $220,000 apiece, only the most dedicated DC Comics die-hards need apply.

The former is a blacked-out titanium of aerospace quality, with DLC coating that guarantees scuff resistance without weighing down the ultra-lightweight material. Even if you’re punching crooks while wearing this bad boy, it still oughta look good as new. Its counterpart is an 18k rose gold watch, fitted with plenty of fancy fittings that’re equal parts luxurious and referential. For instance, peep the Batarang-inspired bridge in the shape of the Batman’s logo, tinted a matching golden hue and custom-designed to fit the length of Jacob & Co.’s bespoke JCFM10 calibre.

Only the Replica Jacob & Co Gotham City dark titanium timepiece boasts that high-contrast black-on-yellow Batman branding on the rear of its case, for instance, while the back of the rose gold watch is fitted with a more traditional transparent sapphire, revealing the complex inner workings and hidden Batman logo therein.

The Batman symbol on the dial has been cut from a single slab of Onyx and is framed with a yellow rim of Neoralithe translucent resin imbued with Super-LumiNova, while its hour markers are attached to the outside rim of the dial, giving them the appearance of floating.

Both watches offer different approaches to their caseback. The Replica Jacob & Co Gotham City rose gold model features a single rose gold bridge in the shape of the Batman symbol, revealing the movement’s twin barrels and tourbillons, while the titanium model features a closed caseback with an illustration of Batman laser-etched onto the underside of a sapphire crystal pane, which has been infilled with black lacquer sitting against a yellow background.