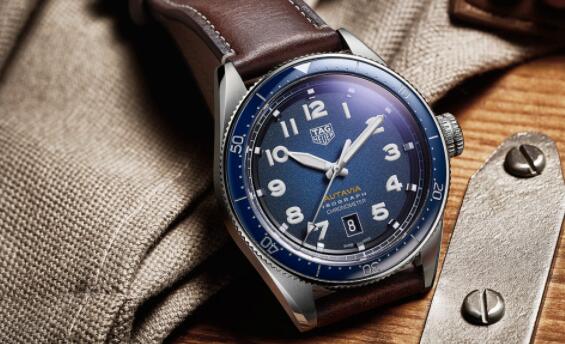 For the first time, TAG Heuer Autavia Calibre 5 COSC has introduced a watch without a

stopwatch function in its traditional Autavia line. In this feature from the WatchTime archives, we test whether this chronometer-certified newbie is another winner.

Heuer first built the Autavia in 1933 as a stopwatch for motor vehicles and aircraft. This cockpit instrument was attached to the dashboard and was used to measure driving or flight times. The Super Autavia, which came later, combined a time display, stopwatch and rotating bezel in a single instrument, with numerals that look like those on the TAG Heuer Autavia Calibre 5 COSC, our test watch. In 1962, Heuer introduced a wristwatch chronograph bearing the same name. From the beginning, it was available with various tracks on a rotating bezel, such as 12-hour division markings for a second time zone or 60-minute markers to measure intervals of up to one hour.

The year 1969 saw the introduction of the Autavia Chrono-Matic powered by the Calibre 11, which was developed in part by Heuer. It was one of the first automatic chronograph movements in a contemporary tonneau case that featured a window date display at 6 o’clock.

Our test watch is not based on a single earlier model but incorporates a variety of elements like the case of the first chronograph with its wide facets on the lugs, the minutes hand of the Chrono-Matic, and the numerals from the Super Autavia. These are mixed with new elements like the gradient color of the dial (shown here in blue) and older functions like the rotating bezel, which has an updated design. All together this produces an attractive, timeless retro look. Thanks to the luminous numerals, striking hands and anti-glare sapphire crystal, it is easy to read the time, and even the date is readily legible. The bidirectional rotating bezel has a finely divided track, which — along with the lack of luminous coating on the triangle marker — requires some careful attention to read. But since this is not a professional instrument like a dive watch, this is acceptable for a secondary function.

The bezel inlay is made of scratch-resistant ceramic, which isn’t as rare as it once was, and is extremely advantageous as it resists signs of wear for an extended time. Another positive feature: the bezel ratchets in minute increments, is easy to use and does not slip unintentionally out of place. Also, the extra-large crown that is taken from the cockpit instrument cannot be screwed down and further simplifies operation. The hack mechanism allows the time to be set precisely.

There’s also good news regarding wearing comfort. The watch measures 42.75 mm across and is therefore the perfect size, isn’t too thick and lies comfortably on the wrist, thanks also to the supple calfskin strap and flat pin buckle. The dark brown strap looks attractive with the blue dial and bezel. And here’s another nice feature: the strap can be easily removed and replaced using a plastic release on the inner side. Other options include a blue or light brown leather strap as well as a metal bracelet and a range of textile straps.

The strap, clasp and steel case are all nicely finished. A wheel and a propeller are engraved on the solid caseback as a nod to the origins of the Autavia as an automotive and aviation model. (The “Autavia” name is formed from the beginnings of these two words.) A transparent caseback would have been nice, of course, but the black-enhanced engraving looks great and the movement TAG Heuer calls TAG Heuer Autavia Calibre 5 COSC is based on a visually unspectacular Sellita SW200, which is structurally almost identical to the ETA 2824. Yet, this robust and reliable automatic movement is even chronometer-certified before it is cased.

Originally TAG Heuer had planned to install its own in-house, carbon composite Isograph hairspring in this model. But this new antimagnetic, temperature-resistant hairspring needed additional, extended testing to ensure perfect function over the long-term and under all conditions. Initially there were models that did not have the new hairspring, and therefore these lacked the “Isograph” label on the dial that was on the prototypes shown at the 2019 exhibitions.

And how precisely does the COSC-certified Autavia run? When measured on our Witschi timing machine, the fully wound watch gained 3.7 seconds per day with a maximum deviation between the various positions of 6.1 seconds. After 24 hours, the amplitude declined by a considerable 49 degrees, and the rate results fell off somewhat, to a gain of 4.6 seconds and a positional difference of 8.3 seconds — quite good results that remain within the standards specified by the chronometer certification agency. Our real-life test on the wrist over several weeks confirmed this with an average of +3 seconds per day. The power reserve of 38 hours, however, reveals that the movement relies on older technology from the 1970s. Modern automatic movements or the improved calibers made by ETA for Swatch Group brands have about double the running time. So, it pays to wear this watch often. But luckily that’s not hard to do, thanks to the comfortable and attractive design. And its reasonable price of $3,100 may make it easier to put this cockpit instrument on your wrist.