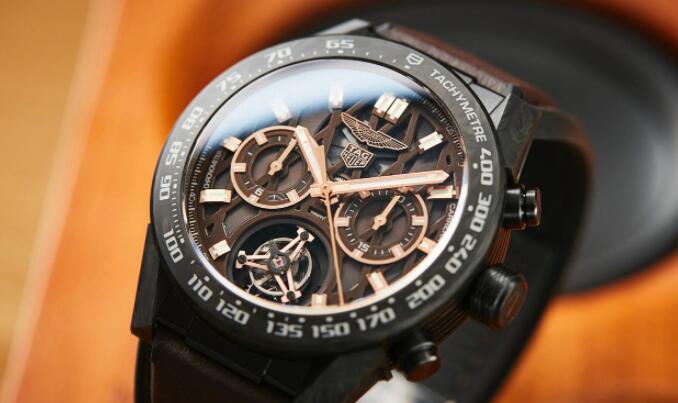 TAG Heuer’s partnership with Aston Martin began back in 2018 when the two companies announced a multi-year partnership at that year’s Geneva Motor Show, with the first watches following shortly after with two co-branded chronographs- a Formula 1 and a TAG Heuer Carrera Chronograph. Last year saw an even more exclusive watch- the 2019 Carrera Aston Martin DBS Superleggera. The only catch with this watch? You had the buy one of the 50 DBS Superleggera cars Aston Martin made in order to get the watch.

For the third year of the partnership we have something special- an Aston Martin edition of the flagship Carrera Heuer 02T, which of course is powered by the Tourbillon variant of the inhouse Heuer 02 movement.
The new watch features a black, rose gold and brown colour scheme, which might not sound like a great match on paper, but work beautifully together on the wrist. The watch feels more “luxury sports” than “track day sports”, thanks to the warm tones and gold highlights.
The new Chronograph is based on the 45mm Carrera Heuer 02T, meaning a modular case and allowing different materials for the centre case and lugs to be easily combined. In this instance we have a PVD-coated titanium centre case teamed with Carbon lugs. The centre case has a series of circular grooves that extend around the case, giving the watch a cool layered look, undoubtedly a design honed in the wind tunnel at Gaydon.

The other carbon element on the case is the tachymeter bezel insert (it’s a fixed bezel), which features a modern, squared-off font.

Another bespoke feature of the watch is the PVD (steel) crown, which has a uniquely-patterned rubber grip. Small touches, but all important to help make this watch stand out from the many other Heuer 02T Carrera limited editions.
Flipping the watch over reveals a sapphire case back, through which you’ll see the rose gold plated rotor. Much of the movement is PVD coated, allowing the rotor and the column wheel to stand out as dominant features of the movement.

The black and gold theme is repeated with the text on the caseback- both the “Aston Martin Edition” script and the “1 of 150”, which denotes the number of watches being made. Yes, again these watches are not individually numbered, with all 150 watches carrying the same generic inscription.
The “dial” of the Aston Martin Heuer 02 is more a skeleton plate than a traditional dial, and features a dark brown lattice-pattern. Most of the dial detailing is Rose Gold- plated, from the Aston Martin wings that sit above the applied TAG Heuer logo, through to the hands and the hour indices. These rose gold elements contrast beautifully on the darker brown and black surfaces.

The 3 and 9 o’clock registers are ringed in rose gold, while the 6 o’clock register houses the Tourbillon regulator, which is dominated by the rose gold plated bridge.
There’s only one option on the strap- a brown calfskin leather strap that complements the brown plate on the dial. The strap has a rubber lining, which feels fantastic- the combination feeling more sporty and up-market than a standard leather strap.

The folding element of the clasp is made from titanium with black PVD coating, while the push-button clasp itself is made from carbon.
It’s been some time since we have worn a Tag Heuer 02T Carrera, and given we borrowed this one at the same time as the 39mm Carrera Montreal Edition, it’s no surprise that the watch feels every one of its 45 millimeters on the wrist. It’s a large watch. but not a heavy one, thanks to the use of titanium and carbon.

If it is to be the final Aston Martin TAG Heuer, then the partnership has gone out on a high, but we hope that there are ways for the relationship to continue as the new owners of Aston Martin seek to rebuild and strengthen the famous marque.