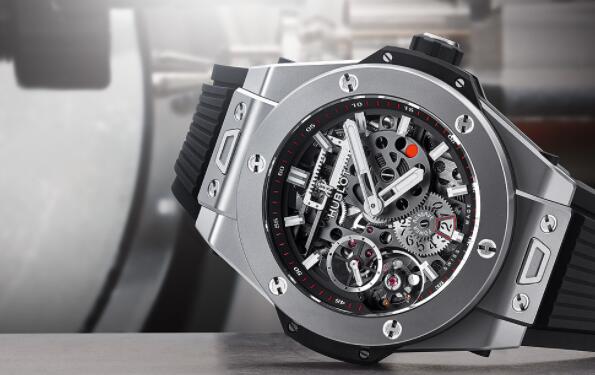 The Hublot Big Bang Meca-10 transports us into the future of mechanical timekeeping with its in-house-developed 10-day movement and its complex design. In this in-depth review from the WatchTime archives, we delve into its award-winning design and technical innovations.

If you had a time machine, would you travel to the past or into the future? If you’re more curious to find out what the future holds, then you’ll love the Hublot Big Bang Meca-10 . This watch doesn’t follow any preexisting horological tradition. Instead, its innovative mix of materials, its prominent screws, and the wheels and racks that can be seen from the front make it look like a post-apocalyptic time machine. The Big Bang Unico with manufacture chronograph and automatic winding was already futuristic, but Hublot takes it a step further with the Meca-10, which is powered by the brand’s own hand-wound movement. The cases of these two models are alike except that the Meca-10 has no chronograph buttons. Their case size (45 mm) is also the same.
A complex synthesis of the arts, the Hublot Big Bang Meca-10 was awarded the “Red Dot Best of the Best” design prize in 2017. The Big Bang Meca-10’s high-quality look and futuristic design have much to do with its complexity. Audemars Piguet’s Royal Oak Offshore also has a bezel with visible screws, but the Hublot Big Bang Meca-10 boasts an even more richly detailed overall appearance thanks to its case’s black plastic middle section, a trapezoid-shaped push-piece to operate the quick-change strap system, and the visible and modern skeletonized movement. It’s clear to the viewer that the complex architecture with numerous parts that comprise the case is costly and labor-intensive.

Hublot’s love of detail is evident. For example, each one of the screws is three-dimensionally designed with a polished ring rising above a matte surface and topped by a unique head with a stylized “H.” Rich details continue in the rest of the case, which appears to be built in five layers when viewed from the side. Two matte black strata of artificial resin separate the bead-blasted titanium levels. The crown, which is coated with rubber on its sides, continues the case’s contrasting black and gray color scheme.

The Hublot Big Bang Meca-10 is built like a state-of-the-art machine whose every detail has been elaborately designed. Even the buttons for the strap’s “one click” quick-change system are styled with refinement. The trapezoid-shaped push-pieces are positioned between the two screws on the upper and lower surface of the strap lugs. The raised edge of each push-piece is satin finished, while its inner part is bead blasted. Refinements such as these make the watch’s styling outstanding.

The strap’s practical quick-change system makes it easy to detach one band and install another. The black rubber strap has a grooved surface. The titanium clasp, which is also richly detailed, has two safety buttons: they run smoothly, they’re easy to operate and they hold securely. However, the clasp has sharp edges when it’s open and when it’s closed, it can press uncomfortably against the wrist.

A watch connoisseur may be unsettled by the complete absence of decorative patterns on the bridges of a watch that sells for almost $20,000. But as we mentioned earlier, the Meca-10 doesn’t follow any preexisting horological tradition. Instead, it introduces its own high-tech, futuristic design codes. Three narrow strap-like bridges run horizontally across the back of the movement. They have no decorative embellishments, but they have been bead-blasted and are dark gray. They’ve also been pierced as though they were parts of a mountain bike that were given holes to make them lighter.
Under the bridges, you can see the two open barrels, the gear train, and the pallet lever and escape wheel, which together comprise the escapement and are made of shimmering, bluish high-tech silicon. Thanks to the use of this material, very little friction is generated, wear is reduced and less lubricant oil is needed.

The view is even better when you flip the watch over and admire it from the front. Right from the start, Hublot made this movement to equip a watch without a dial, so the front side of the caliber is handsomely designed. The oscillations of the balance, which has been moved from the back of the caliber to the front, are the first things that catch your eye. As on the underside, the bridges are pierced, matte gray and satin finished. A large portion of this side of the movement is occupied by the unconventional power-reserve display at 6 o’clock. This indicator includes a rack, which runs on tracks at the top of the display and is propelled by a pinion inside the mechanism. The pinion moves a large gray wheel that’s adorned with six Hublot screws and skeletonized in the shape of the Hublot logo. When only three days of power reserve are left, a red section gradually appears in a little window to remind us that it’s time to wind the watch.

The remaining power reserve is more precisely defined by the small wheel, which is propelled by the large wheel and hosts a red-rimmed window. It collaborates with the gear with skeletonized numerals below it. The words “Power Reserve” are written in the same stencil typeface that’s used on the minutes scale. This is another detail that’s part of Hublot’s creative drive. The brand succeeds in forming an artwork using the mechanisms that are visible from the front.

The craftsmanship is very tidy, not only in the movement, but also throughout the rest of the watch. We peered through a watchmaker’s loupe, but we couldn’t find even the faintest trace of a tool mark.

Several difficulties arise when designers eliminate a watch’s dial, but Hublot has mastered each challenge. For example, there’s no surface to bear the brand’s logo, so Hublot printed it on the underside of the crystal. The large indexes, which seem to float above the movement and accentuate the three-dimensional look, are coated with plenty of luminous material and held in place by a narrow inner ring. Despite the absence of a conventional dial, the time is easy to read, thanks to the broad hands and the very good anti-reflective treatment given to the crystal. But the outer ring and its calibrations are missing entirely between minutes 37 and 43. Their absence assures an unobstructed view of the balance but also makes it more difficult to read the time to the nearest minute.

In addition to the Meca-10’s innovative design, its extremely long power reserve is another plus. This watch can keep running for 10 full days before it needs winding. Fine adjustment is accomplished via an index, which is moved by a vertical screw.
We were very curious to see the results of our test on the timing machine because marathon runners with 10 days of power reserve often encounter difficulties, even if – like the Meca-10 – they can rely on energy stored in two barrels. After 12 hours had elapsed, this manually wound watch kept time with a very good average gain of 1.7 seconds per day in all positions, but the spread among the individual positions was somewhat wide (9 seconds).

The picture hadn’t changed significantly after running for four days, although the amplitude declined noticeably: the average daily deviation shrank to 0 seconds and the difference among the several positions remained unchanged at 9 seconds. After seven days had come and gone, the average daily deviation had slipped into the minus column (–2.8 seconds), thus compensating for the gain posted during the first several days. The difference among the positions increased to 11 seconds. This is when the power-reserve display changes color and shows its red plane: the wearer should take this scarlet hint and wind the watch because the amplitude declines so much after nine days that deviations of –26 seconds occur in the hanging positions. The watch continues to run, but the accuracy of its rate is no longer in a good range. Although Hublot has not completely solved the problem of an extremely long power reserve, this watch can still be allowed to run for seven or eight days without suffering significant loss of timekeeping accuracy.

With a retail price of $19,900, the Big Bang Meca-10 costs $1,100 more than the Big Bang Unico Chrono Titanium. This may sound peculiar at first. The Meca-10’s long power reserve is regarded as a petite complication and the watch also has a complex power-reserve display, but the Unico chronograph caliber is a more complicated movement. Yet in the Meca-10, Hublot has shown greater thoroughness and creativity in developing the aesthetics of visible mechanisms. Its somewhat simpler movement offers more opportunities for styling, and Hublot has taken full advantage of them. Furthermore, there are hardly any alternatives among manufacture watches with technical styling and visible movements in this same price range. A Richard Mille, for example, costs considerably more. (The recently released Richard Mille RM 11-03 McLaren Automatic Flyback Chronograph is priced at $191,500.)

The Meca-10’s price is justified by its complex case, its manufacture caliber engineered to offer the winning combination of high-tech aesthetics and a 10-day power reserve, and high-quality craftsmanship in every detail. Moreover, the wearers of this time machine can embark on a journey through time whenever they wish. All it takes is a glance at this model on the wrist and its owner immediately knows how the future of mechanical watches will look.