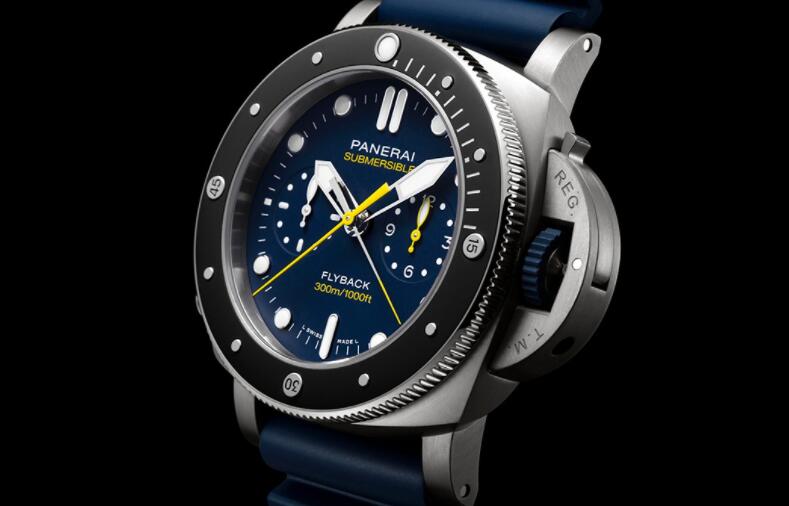 Horn, whose exploits include trekking to the North Pole during its winter darkness and summiting a number of world’s highest peaks without oxygen, has been a Panerai partner for nearly two decades.

The watch is supplied with a blue rubber accordion strap and Panerai’s new UPCamo bi-material strap, which uses rubber and camouflage material inspired by Italian Navy uniforms.
Panerai’s relationship with professional adventurer and explorer Mike Horn spans nearly two decades and encompasses several special-edition watches, most recently 2019’s Submersible Mike Horn Limited Edition – 47mm, which ushered in the relaunch of the Submersible collection as a new pillar of the Panerai brand. The latest Panerai timepiece paying tribute to Horn, which dropped this week, also hails from the Submersible family and features a high complication in striking blue-and-black livery. Here’s a look at the Panerai Submersible Chrono Flyback Mike Horn Edition .
The watch uses lightweight yet highly resistant brushed titanium for its 47-mm case, which incorporates a unidirectional rotating dive-scale bezel made of matte-black ceramic and features Panerai’s patented bridge device to secure the screw-locked crown. The dark blue dial, with its luminous applied hour markers, contrasts splendidly with the bright yellow and white central chronograph hands. The color combo, avid Paneristi may recall, is reminiscent of a previous Mike Horn model, 2016’s Luminor Submersible 1950 Pole 2 Pole Limited Edition.
Panerai’s in-house Caliber P.9100 beats behind the solid, screwed titanium caseback engraved with Mike Horn’s signature. The automatic movement uses a vertical clutch and a column wheel to drive its chronograph functions, including the flyback feature that allows the stopwatch to reset and restart with a simple press of the pusher at 8 o’clock. It stores a three-day (72-hour) power reserve in two series-connected spring barrels and includes a seconds-reset device, a bidirectional rotor, and a variable inertia balance oscillating at 28,800 vph.
To those with a deeper knowledge of the Panerai universe, the name Mike Horn is likely to sound familiar. The professional explorer, survival expert, environmentalist, and motivational speaker’s connection to the brand dates back 20 years now, stemming from his reception of the Laureus World Sports award in 2001 — then sponsored by the brand. Horn has remained a faithful ambassador ever since, and the launch of the Panerai Submersible Chrono Flyback Mike Horn Edition is now the seventh limited edition reference to enter production.
With a typical ambassadorship, photos will surface of the celebrity in question sporting the brand’s watches on the red carpet or out on the town; this couldn’t be further from the case with Horn. Historically each of his collaborations with Panerai have been tied to a particular expedition — a world-first manually powered winter expedition to the North Pole, a Pole 2 Pole circumnavigation of the globe (for which a past Panerai reference was named), and no less than 14 laps of the earth via sailboat over the last decade or so. Repeatedly traversing some of the coldest terrain on the globe, Horn long ago learned that LCD screens and other tech aren’t up to the task, forcing him to rely on the old school technology of mechanical watchmaking. His unfathomable scope of experience has also given him a first-hand look at the disastrous impact of global climate change on the polar ice caps, and there’s little doubt that his longstanding relationship with Panerai has helped push forward the brand’s initiatives with more sustainable materials and production methods.
Getting back to the watch at hand, the 47mm Panerai Submersible Chrono Flyback Mike Horn Edition is the latest of three self-winding flyback chronographs now found in the growing Submersible collection. Powered by the in-house manufactured P.9100 calibre, the watch delivers a three-day power reserve via a pair of mainspring barrels. A combination of Panerai’s patented Safety Lock crown protection, a threaded titanium caseback (adorned with Horn’s signature), and screw-down chronograph pushers are used to ensure a water resistance of 300 metres. Unlike most chronographs on the market, the elapsed minutes of the chronograph are displayed on a central hand alongside chronograph seconds, leaving an hour totalizer and running seconds to be displayed by subdials at three and six o’clock. Between this design choice, the contrasting blue/yellow/white colour scheme, and the significant size of the timepiece itself, it’s safe to say that legibility is on point.
Unlike past Panerai Mike Horn limited editions, this new Flyback Chronograph is not anchored to a particular exploratory venture. Without context or history, some would flag this as a lackluster effort, but not when discussing someone with a resume as extensive as Horn’s. The last leg of the Pole 2 Pole expedition came to a close in 2020, and in our eyes, the man deserves as much time to decompress as he sees fit.