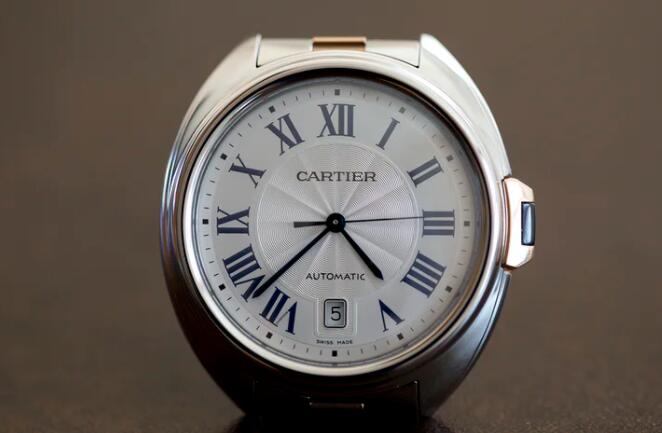 Last January at the 2015 edition of the SIHH, Cartier launched a major new family of wristwatches called the Clé De Cartier – named for the key-like, oblong winding and setting crown set into the flank of the case. We went hands on with the original launch models and we were very impressed by not only the visual, but also the tactile aspects of the design – the watch felt great in the hand and on the wrist, and the crown was just different enough to give a tingle of pleasure, but not so unusual as to become an obstacle to convenience. The Clé De Cartier family was also the launch platform for a new movement: the Cartier caliber 1847, which is the newest in-house general purpose Cartier movement, as well as its least expensive. The finish is not as elaborate as on, say, the 1904 MC (found in the Calibre de Cartier) but it comes in at a lower price as well, which puts the Clé De Cartier in a generally more affordable price bracket – the model we’re looking at here comes in at under $10,000 (though only just).
That Cartier has an absolutely masterful range of higher end watches is no secret to serious watch enthusiasts – its head designer, Carole Forestier-Kasapi, and her team at Cartier’s manufacturing headquarters in La-Chaux-de-Fonds, as well as at the company’s Geneva-based manufactory, have produced a steady stream of remarkably innovative timepieces, up to and including not-for-sale exotica like the ID One and ID Two concept watches (though the fact that no one has bought either of these two extremely intriguing one-offs is not for lack of trying; there have been multiple attempts to get the company to part with both, although so far Cartier has said no to all offers). The Calibre de Cartier Diver introduced the first diver’s watch to Cartier’s collection of timepieces, and slowly but steadily, it’s done much over the last decade to reassert its own considerable history as a horological design atelier, as well as craft a new identity as a vertically integrated manufacture, and technical innovator.
The Clé De Cartier in rose gold and steel is the latest addition to the family; it’s part of the largest diameter group of Clé De Cartier timepieces, at 40 mm. (31 mm and 35 mm versions are also offered.) The Clé De Cartier’s case has a definite 1970s-era vibe, but a rather muted one when the watch is on a strap; on a bracelet, and especially in gold and steel, the echoes of that period in watch design are a bit more pronounced, but it’s still, fundamentally, a very elegant-feeling watch.
Seeing this model gave us another chance to appreciate the sophistication of the case-work as well. The Clé De Cartier is all graceful curves and gently rounded angles; even the crown, which has a triangular cross-section, feels smooth to the touch, and its oblong shape (which extends to the inset blue cabochon) makes it an harmonious accent to the overall design, rather than an interruption. The crown’s actually mechanically rotated into the correct alignment when it’s all the way in – it feels like there’s some sort of jumper spring holding it in place – but you can still turn it if you want to hand-wind the watch, and hand-setting is completely conventional as well – rotate the crown to the vertical position, pull it out, and the crown rotates freely to allow the time to be set. The crown on this two-tone model’s also in gold, in keeping with the overall rhythm of alternating steel and gold established by the bracelet, and contributing unobtrusively but definitely to the success of the design.
The dial is very neatly done and here, Cartier has avoided unnecessary flourishes; whoever designed the Clé De Cartier knew enough to let the key-crown take center stage to some extent, but even so, this is one of those watches that is an ensemble piece, not a star vehicle. The general feel you get is one of unobtrusive high quality; glancing at the dial, you see the time, not a design, but if you’re inclined, under close inspection it’s clear that a level of detail has been paid to all elements present that you’d expect from Cartier. This may be (relatively) an entry-level timepiece but it doesn’t feel like one, and you never have the impression when you are wearing it that any corners have been cut. Even the movement, which makes no pretense of being haute horlogerie in conception and execution, is the better for its honest, unassuming finish, which seems part and parcel of the overall spirit of the watch.
This combination of very low profile mechanical inventiveness, and very high profile elegance and apparent simplicity in design, are really the two key (pardon the pun) signature Cartier elements when it comes to horological design – if you look at some of the firm’s most famous timepieces – its mystery clocks – you see exactly that combination of great clarity and artistry with mechanical ingenuity. I wouldn’t go so far as to put the Clé De Cartier’s crown on the same level as the act of prestidigitation that is the mystery clock, but it’s in the same spirit: making inventiveness serve, and be integrated with, visual and tactile aesthetics, not presented as a point of interest for its own sake.

The most interesting thing about the Clé De Cartier, though, was how it felt to wear after a few days. The Clé is one of those watches that can easily fly under an enthusiast’s radar; it wasn’t designed for the horological fanatic per se, but rather for a Cartier client who wants what used to be called a gentleman’s timepiece. I’ll be honest, if I hadn’t out of curiosity had this watch in for review, I doubt I ever would have gone out of my way to try one on. But I’d have missed something. The Clé De Cartier grew on me; I put it on without thinking very much about what I was doing at all and went back to writing about something else. But over the next few hours I found myself enjoying the watch more and more, and by the end of the review period I’d gotten very attached to it and found myself sending it back to Cartier with a definite pang. I think the Clé De Cartier watches have the potential to become a real anchor for and staple of Cartier’s watch collections, and I’d encourage skeptics to give it time, because it does something not a whole lot of watches at any price point manage to do: make you feel something different from what you thought you’d feel.