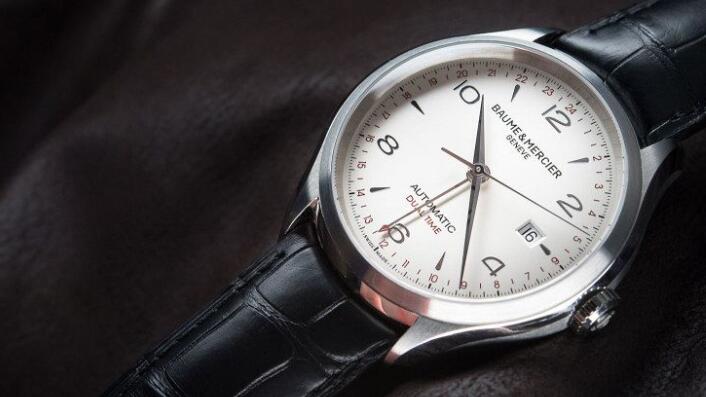 Baume & Mercier’s Clifton collection was introduced in 2013 and draws inspiration from classic Baume & Mercier timepieces from the 1950s. It has been a gamechanger for a brand who was beginning to suffer from an identity crisis. The solution, it turned out, was right there in their archives. These simple, fluid watches are indeed reminiscent of the sort of simple watches our grandfathers wore – reassuring, honest timepieces that had a unique charm and personality that can only come from products made in a pre-digital / pre-CAD design world. The first version of the Clifton managed to capture this pre-digital spirit, and this Baume et Mercier Clifton GMT (which is essentially the base Clifton with a nicely implemented dual time indicator) is no different. It’s a well made, classically styled watch that manages to be understated without being conservative. The Baume et Mercier Clifton GMT looks and feels great on the wrist, and for a watch in the competitive sub $5k price point manages to hit all the right notes. Read on for the full breakdown.

EDITORS NOTE: Before reading this review, we feel it only fair to let Australian readers know that, at time of publication you have just over 24 hours to be in the running to win your very own Clifton GMT – see here for all the details.
The GMT uses the same case as other watches in the Clifton family, and I’ve got to say it’s a very nice case indeed. The Clifton is an understated and elegant watch, and has an appropriately understated and elegant case. The tech specs say the case it 43mm, but unlike some other watches with this case width, it doesn’t feel too big on the wrist, perhaps due to the wide, short lugs and well proportioned bezel. What I liked most about this case however is that rather than going for a completely satin finish, which would have dragged the watch into ‘utilitarian’ territory as opposed to ‘classic’ the designer have opted for a highly polished bevel on each side of the case. It highlights the elegant lines of the case and really adds to the watch as a whole.
Baume & Mercier make the Baume et Mercier Clifton GMT in two dial variants, a nice starburst anthracite and this silver dial which has an even matte appearance. Like all the other elements of this watch the dial hits the right notes; restrained, but classy. The faceted dauphine style hands are an obvious choice for this sort of casual dressy piece, and along with the applied polished Arabic numerals and teardrop indices add a little reflective bling to the watch and can give some nice light-play in different circumstances.
And speaking of numerals, how great is that ‘4’ – such a good typeface. Well done. The GMT hand is suitably unobtrusive – you’re not going to easily confuse it with the home time hand, but the red tip to match the red 24 hour chapter ring adds a little brightness to the watch and keeps it from veering too heavily into the conservatism, plus it adds some visual coherence – the red hand indicates the red hours. The 24 hour scale is easy enough to read once you wear it for a while. I do tend to think the typeface for the 24 scale errs a little on the vanilla side; something with a bit of a deco touch would have been taken it to another level. The placement of the other printed dial text is fine, and evenly weighted. The date window at three is also good, simple and functional. All in all the dial delivers on the Clifton’s promise of a classically good looking timepiece.
The beating heart of the Clifton GMT is the BM 11893-2, which is a nicely finished (Geneva stripes on the rotor and some perlage) and modified ETA 2893-2. Swatch owned movement makers ETA make movements that are in a huge number of Swiss watches, they’re proven and reliable, and the most sensible economic choice for a watch at this price point.
This pertinent thing about this movement isn’t the date function or the hacking seconds – that’s all pretty par for the course. It’s all about the second timezone function, which is displayed in 24 hour time. The second, GMT hand can be adjusted independently, it jumps in hour increments, making the setting of the second timezone relatively easy.

One thing I quite like about Baume & Mercier’s use of this movement isn’t immediately visible – on many watches with movements that haven’t been specifically designed for the case the movement is often smaller than the case. The movement is held securely in place with a spacer or movement ring. On cheaper watches this will be plastic, but on this guy it’s solid metal, which is a lot more robust and also adds a nice heft to the watch overall.
The watch comes on a nice, half padded alligator with a very smooth and comfortable double fold deployant. Even here it shows that Baume & Mercier have added a little extra to elevate this watch above the utilitarian. The endpieces of the strap are curved to fit the curve of the case, creating no gap between strap and case. A small detail but a very pleasing one, and proof that this watch has been well designed and thought through, rather than merely cobbled together out of composite parts.
In the course of my work, and personal watch love I wear quite a few watches, and I routinely ask for my partners opinion (as a non-watch person) on these various watches. The Clifton GMT has been her favourite watch of recent times. This is a really good indicator of what this watch is about and who it’s for. The Clifton GMT isn’t made for watch nerds. It’s an accessible luxury product with great construction quality and the best components for the price. It’s a watch for someone who appreciates quality, but doesn’t want to get caught up in movements, manufactures or maisons. The Clifton GMT delivers its promise of being a classic watch.
Who’s it for: Many GMT watches out there cater to either the military ‘tacticool’ crowd or have a “I need to know what time the New York markets open” kind of feel. This watch is for the person who knows it’s always five o’clock somewhere, but who wants to be able to work out where precisely it is. Preferably with a negroni in hand.

What would we change: To be honest, not a whole lot. For the market this watch is intended for, it’s a great amount of watch for the money. But if we had to get picky (and we do), I’d like to see a little more in the dial, be that an applied logo, or a slightly more unique typeface for the chapter ring. It’s very good and totally serviceable as it is, but just a touch more nuance would bump it to great.