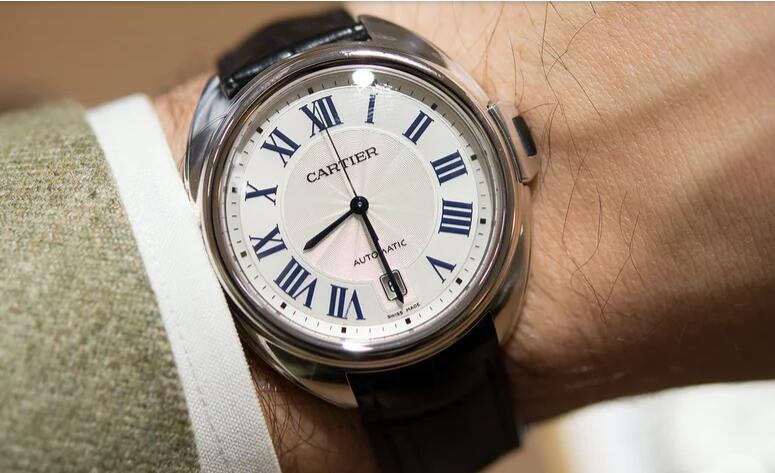 My first vintage watch was a Cartier Santos Dumont – a small, handsome, time-only yellow gold model from the 1960s model that introduced me to the wide, wide world of vintage watch research. I became fixated on this watch for a myriad of reasons, but most certainly because I knew Cartier as a watchmaker and this particular watch harkened back to both the early days of the maison and the early commercial history of wristwatches in general. So when Cartier announced a completely new line of watches – Cartier Clé de Cartier 40 – I was curious to see how this legendary company intends to move forward with a respect for its heritage and an eye on innovation.
In a slickly-designed presentation, Cartier distills the current design of its watches to four main case shapes. The Santos Design aficionados may lament the absence of the Cartier Crash in this quartet, but that particular model was more of an exercise in aesthetic savoire-faire than full-fledged product development. (Though we are happy to see that the maison recently introduced a new version of the Crash, skeletonized to show an unusually-shaped in-house movement.)
In the most reductionist sense, the case can be described as pebble-shaped. But that would surely be a disservice to the countless hours spent developing the concept, conducting market analysis, and developing prototypes. Introducing an entire suite of watches based on this new case design is not a fly-by-night decision, particularly for a firm as large (and as storied) as Cartier.
At a quick glance, the shape of the Cartier Clé de Cartier 40 resembles a few watches from the late 1960s and 70s, with unconventional ovoid cases (like the Omega Seamaster Cosmic pictured above). But in this industry, viewing watches with a quick glance is an anathema – and doing so in this case would void any chance of observing the level of detail in the architecture of this case.
From a lateral view, the elegant, fluid contours of the Clé de Cartier case are readily visible. The foundation of the case shape – a simple circle – appears at once suspended and integrated into the curved, horn-shaped lugs which provide the case with its ovoid shape. These lugs curve, rather comfortably, to rest against the wrist.
What you’ll also notice from this lateral view is, perhaps expectedly, a vivid and glossy dash of blue emanating from that familiar sapphire stone featured in the crown of Cartier’s classic watches. But, in this context, the use of sapphire is the only point of similarity between the Cartier Clé de Cartier 40 and the maison’s other models. This new model features a redesigned approach to setting the time and date, in the form of a pivoting, meticulously-designed key.
Designed within the new in-house movement (which I’ll get to in a second) is an indexed winding system controlled by this key. In its resting state, the key sits astride the case, pronounced in a way that beckons your fingertips to engage. A gentle twist of the key causes it to pivot, with a specific feeling of security, pulling it out of this resting position, allowing you to set the time and date. The construction of the winding system erases the possibility of erroneously moving the hands once you’ve finished setting the watch.

With a twist, the key pivots back into its original position, offering a reassuring “click” during the process. (A great many consumer products are engineered with acoustic experiences in mind. In essence, the right combination of tone can elicit positive, if subliminal, responses from the end user. Conversely, less successful exercises in acoustic engineering can result in uncomfortable consumer experiences and viral internet notoriety.)

In concept and execution, this “key” is the type of detail that would drive any industrial designer, even this distinguished sir, absolutely mad in pursuit of perfection. Ultimately, the work behind this component has paid off, as this feature was a delight to use on the models I handled in person.
Across the 22 models within this new line, there is one design detail that stays relatively constant: the dial. With the exception of women’s models with diamond accents, the dials are all relatively traditional in design, with an opalescent guilloché center section surrounded by a pearl-white outer rim. Bold Roman numerals are painted in deep blue, with just one hour-marker missing at 6 o’clock, where a small aperture for the date can be found. The guilloché center extends just at this point, providing a wavy border around the date.

Cartier insignia is front-and-center, resting below 12 o’clock. On the outermost portion of the dial, a simple minute track features a bold marking at every 5-minute interval. Blued steel hands for the hours, minutes, and seconds complete the package.

Viewed head-on, the dial really takes center stage within the perfectly circular and rounded bezel.
Beyond the dial, new case, and nicely-designed crown (or key) the Cartier Clé de Cartier 40 is notable for one more important fact: it houses a new in-house movement developed by Cartier, caliber 1847 MC.
This new self-winding movement with 42-hour power reserve effectively takes the place of the ébauche ETA movements on which this otherwise remarkably integrated maison once relied for its higher-volume production models. This development is important from a business perspective, namely because it allows Cartier to step away from dependency on the Swatch group’s ETA manufacture (which is making a move toward restricting distribution of its movements). And it’s also important for consumers, as the inclusion of an in-house movement, even a basic time-only workhorse movement, presents a more compelling value proposition with respect to other models on the market today.

While caliber MC 1847 is being introduced in the Clé de Cartier, we can expect to see the movement used in other models, like the Santos de Cartier, that appeal to a wider, sometimes less horologically-inclined but still design-focused segment of the market.
When I tried on the Clé de Cartier, the 40 mm case looked unexpectedly futuristic on my wrist, but in a believable, approachable way. It was futuristic in the sense that the ovoid case shape felt slightly alien (to me, anyway) compared to the standard round watches in my normal rotation. It was approachable in the way the new case design seems to progress the traditional, conservative round watch face into something at once recognizable and new. I could actually imagine more than a small portion of the market wearing this watch, much like the familiar-yet-unconventional banded-collar shirts worn by the love-lorn protagonist in Spike Jonze’s film Her.
With an ear toward the critiques of some more demure female watch enthusiasts, I am compelled to lament the fact that the 35 mm women’s models all feature diamonds, whether on the bezel alone or on the bezel, dial, case, and bracelet (as in the most, shall-we-say, flamboyant model).

However, I am also compelled to consider the fact that, well, I’m pretty sure Cartier knows what they’re doing from a business (read: financial) perspective. In 2014, Cartier and its high-jewelry counterpart Van Cleef & Arpels, accounted for 51% of total Richemont group sales globally. That’s roughly EUR 5.4 billion; a steady increase from 2011, 2012, and 2013. There is a market for jewelry, there is a market for diamonds, we know there is a market for watches, and, notwithstanding uncertain continued stability, it appears to be profitable at the moment.