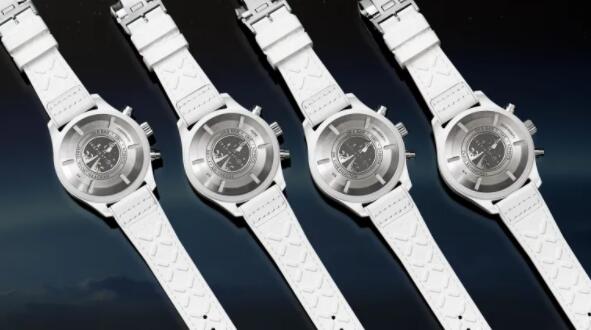 The watches will be worn by the four crew members on their journey into space, before being auctioned as part of the mission’s aim to raise funds for and promote the life-saving work of St. Jude Children’s Research Hospital

.
The IWC Pilot’s Watch Chronograph Edition “Inspiration4” features a case made of stunning white ceramic. The dark blue lacquered dial has been pad-printed with countless stars and captures the depth and darkness of space. It also features the Inspiration4 logo. Inside beats the IWC-manufactured 69380 caliber chronograph movement.

On each of the four watches, the titanium case back has been engraved with the name and mission value represented by the respective crew member. The chronographs are fitted with an eye-catching white rubber strap with a leather inlay.
Named Inspiration4 in recognition of the diverse, four person crew’s mission to support St. Jude Children’s Research Hospital and send a humanitarian message of possibility, the multi-day journey to low-Earth orbit represents a new era for human spaceflight and exploration. The mission is the brainchild of Jared Isaacman, a 38-year-old entrepreneur and accomplished pilot who will also serve as Commander.

The mission is set to launch in September from historical Launch Complex 39A a t NASA’s Kennedy Space Center in Florida. The spacecraft will orbit the planet at an altitude of approximately 357 miles (575 kilometres) and a speed of more than 17,500 miles per hour (27,360 kph). After the multi-day journey, the crew will re-enter Earth’s atmosphere for a soft water landing off the coast of Florida.
Four unique Pilot’s Watches representing the mission’s values of Leadership, Hope, Generosity and Prosperity will travel into space before being auctioned in aid of St. Jude Children’s Research Hospital

Isaacman occupies the Leadership mission seat and serves as Commander. He is the founder and CEO of Shift4 Payments and an accomplished commercial and military pilot who holds several aviation world records.

Finally, the Generosity mission seat will be occupied by Christopher Sembroski. The 41-yearold aerospace industry employee and United States Air Force veteran contributed to a fundraising campaign that offered an Inspiration4 seat to one lucky donor.