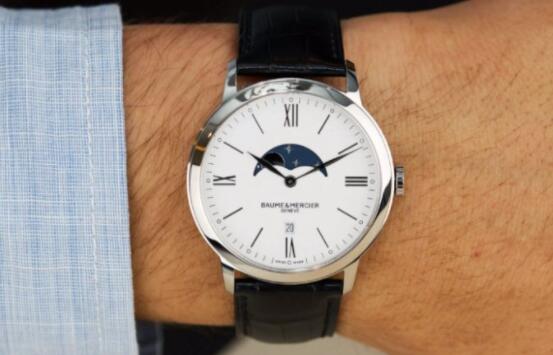 Moonphase watches garner much affection and appreciation for beautiful timepieces. This stunning yet state-of-the-art machinery captures the magic in luxury watchmaking and makes it a highly-demanded business. With many watches of this caliber on offer, Baume and Mercier’s Classima 10219 watch has both contemporary aesthetics with classic design in unique and beautiful balance. Although it’s not the most visually-stunning item, its luxury cannot be denied.
A moonphase timepiece is one of the most beautiful in all of the luxury watchmaking industry. They provide a subtle yet romantic touch to what is usually a pragmatic business. With all the focus on technological advancements and innovative functions, a moonphase design provides elegance with a little bit of drama. Today, countless moonphase watches are offered by various luxury watch labels, but a particular stand-out is Baume and Mercier’s Classima 10219.
The Baume & Mercier Classima 10214 has design cues that are classically oriented and that often find themselves amenable to the semi-casual wardrobe. Those cues begin with a 40 mm x 9 mm round case in stainless steel. That’s conservative and thin enough to slide under your cuff, but also polished so that it’s not completely discreet – it’s a dress watch after all.
Baume and Mercier’s Classima collection has been a huge favorite in their range for quite some time now. In 2015, they released the Classima 10219 moonphase watch, which instantly became a mega favorite among the label’s faithful clientele and other watch collectors. The watch was even featured in premier watch shows, such as “Watch & Wonders” in Hong Kong during September 2015. Today, this timepiece costs around $1,850.
Balance is the key word when describing Baume and Mercier’s Classima 10219 timepiece. Oftentimes, moonphase watches tend to get too fantastical or overly-romantic when it comes to their aesthetic. The Classima 10219, however, displays just as much beauty as it does practical design. Its details are as sleek as ever while the Roman numerals are very much legible. With its silver, stainless steel casing, this contemporary timepiece evokes as much modernity as it does fine artistry.
Although the balance in overall aesthetic is a pro, for some, it may be its weakness. Moonphase watches are known to be the most romantic-looking timepieces in the entire luxury market. Fans of such might see the Classima 10219 as a painfully plain watch with not as much design value as its contemporaries. Moonphase watches are known for their stunning imagery, artistic details, and at times, even shimmering crystals. In comparison, Baume and Mercier’s Classima 10219 can almost classify as a minimalist watch, even though it’s a moonphase timepiece too.