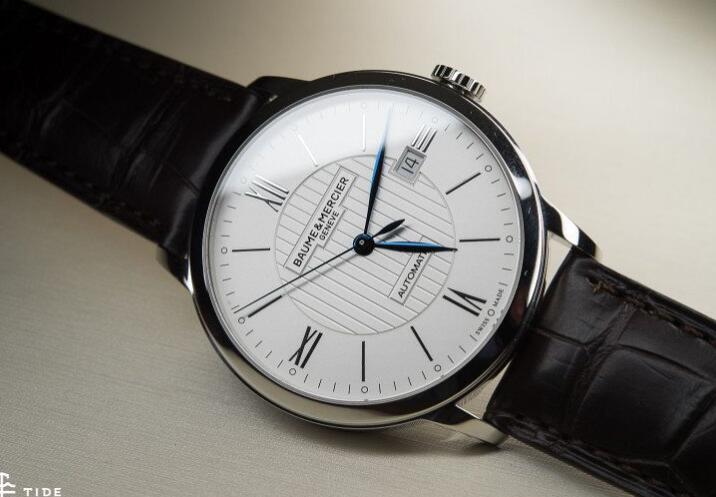 The new-look Baume & Mercier Classima was designed to be an entry point into the world of fine watches. As first steps go it’s a confident and assured one.
Baume & Mercier have carved out a space in one of the most crowded sectors of the fine watch world. As a maker of more entry-level luxury timepieces they face some tough competition – everyone from Kickstarter micro-brands, through to Swiss stalwarts like Tissot and Frederique Constant, has a version of the classic, three-handed everyday dress watch.
Baume & Mercier Classima differentiate themselves from this pack by marketing their watches in a very specific way. Baume & Mercier want to be your first ‘good watch.’ CEO Alain Zimmermann asks: “Do you remember your seventh watch? No. You will never forget your first watch, because this is the one you had to wait so long for.” And if Mr Zimmermann has his way and your first watch is a Baume & Mercier there’s a good chance that watch will be from the revitalised Classima range.
With a new, crowd-pleasing case size of 40mm the Baume & Mercier Classima has a refreshed dial that adds a touch of youthful modernity to the classic style, adding central line guilloche to the roman numerals and blued hands to create a confident and classic watch that makes up for in versatility what it lacks in individuality. But that’s not to say the watch is dull. Baume & Mercier have cleverly used the polished surfaces and broad clean surfaces available to make the otherwise conservative Classima light up on the wrist.
The Baume & Mercier Classima comes in several variants: steel on strap or bracelet, as well as a slightly dressier red gold two-tone option. All the men’s pieces come with sapphire crystals and reliable Sellita movements as standard. While these watches are on the more accessible end of the luxury watch spectrum, the construction and quality present is comparable with that of many pricier options.
And on the often-delicate subject of price Mr Zimmermann had a refreshingly candid take for someone in the business of selling luxury:
There is a great truth to this. When looking at the this watch it’s easy to compare it to everything else out there in a similar price range (and honestly it holds up well against its competitors), but really it should be seen not as a watch, but rather as a marker in time. It’s an object to commemorate a moment, a graduation, a birthday or a new job. And for this purpose the Classima’s timeless good looks are perfect. You can envisage a man passing on the watch he received at his graduation onto his own child, and if that watch is a Classima it won’t look too dated, 40 or so years on.
It is the neutrality of the Classima that is its greatest strength. Baume & Mercier made a deliberate choice for the Classima to be a suitable entry point into the world of luxury watches for as many people as possible. Or, as Mr Zimmermann put it: “I want us to design a watch as if it’s the one and only. I don’t want to fulfil a niche.”