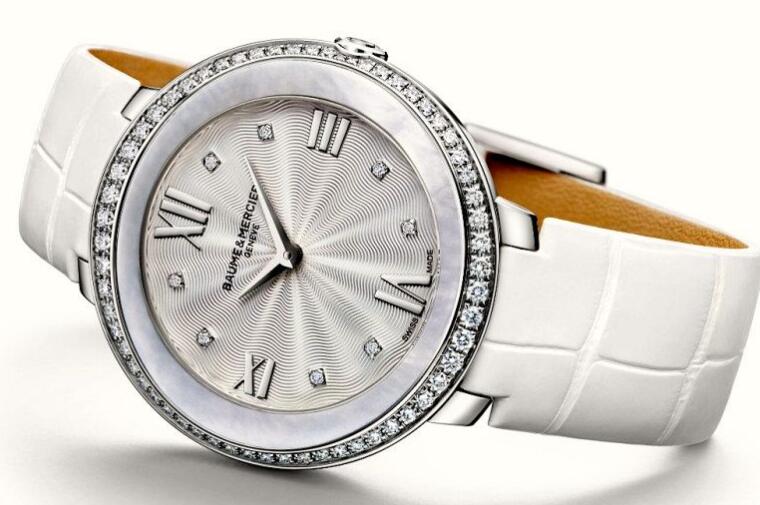 It’s a Man’s Man’s Man’s World, James Brown told us and if he was talking about watches, he was right.

Too many women’s watches over the years have been scaled down versions of the men’s model. Change the colour scheme, add a mother-of-pearl dial, encrust it with diamonds and it’s ready to go, right?

Wrong, says one of Geneva’s original watchmakers, Baume and Mercier Promesse, which was founded 184 years ago. One of the aspects that differentiates Baume & Mercier’s approach to women’s watches is their genuinely bespoke designs. Rather than producing a feminised man’s watch Baume & Mercier are more interested in watches designed for women.
Baume & Mercier was one of the first brands to consider that a woman may also find it useful to know what the time was, launching its first feminine collection back in 1918. Since then, the brand has continually evolved their women’s watches to fit with the fashion of the times- whether it be the bangle-style Marquise of the 1940s or the futuristic Galaxie of the 1970s, the look of their ladies’ collection has always been on point with the era.

So, no pressure then for the launch of the first new Baume & Mercier women’s range in almost 10 years- the Promesse (French for Promise). Having spent four years developing the Promesse, the launch of the range was held back from the usual SIHH show in January to make sure that the new model could have its own time in the spotlight, rather than sharing the stage with the other Richemont group novelties. This diva needs her stage.

Earlier in the European summer, the Baume and Mercier Promesse was launched at a glittering event in Paris, with Time+Tide being the only Australian media there to enjoy the hors d’oeuvres and mingle with an intimidatingly attractive guest list. And as a bonus, we were also lucky enough to spend some one-on-one time with the man tasked with adding another chapter to the legacy of Baume & Mercier’s women’s watches, lead designer Alexandre Peraldi.
While the Marais district of Paris sits in the heart of what was traditionally establishment Paris, today the area plays host to an eclectic mix of Churches, art galleries, funky boutiques and grand town houses, such as Hotel de Brossier, where the Promesse launch was held. Fans of French reality TV (all 6 of you in Australia) may recognise the building as the home to Star Academy 8, the Gallic version of Idol. The event not only launched the watch itself, but also the name of the new series, which until then had been a tightly-held secret.
Upon arrival each guest was given a padlock to place on a elaborate metal ribbon sculpture located on a rear wall. The idea was inspired by the Pont des Arts, the famous bridge in Paris where couples attach padlocks with their names inscribed and then thrown the key into the River Seine as a symbol of eternal love. While a section of the Pont des Arts weighed down with these “love locks” collapsed only three days after the Promesse launch, Baume & Mercier’s engineering proved up to the challenge on the night. The installation, including our padlock (dedicated to my wife, naturally) survived. While the party kicked on downstairs, upstairs was a superb exhibition of the brand’s historical women’s collection, each set in the context of the era. What I liked about these historical pieces is that each watch clearly evoked the look of its time. Rather than the brand settling on the “perfect” design for a watch and simply refining that one piece over the years, they have allowed the nuances of each era to influence the design. Eventually, the rear wall holding the locks slid open to reveal the real star of the show- the Promesse range.
The inspiration for the design of the Baume and Mercier Promesse is the concept of two rings, one placed inside the other- the outer ring being the watch case, while the inner ring is the beautifully sculpted oval bezel you see above decorated in Gold. While the new watch is not a “re-edition” as such, it does draw from one of Baume & Mercier’s historical pieces (below) from the 1970s.
It’s a fulsome range, with some 14 different models available to ensure that individual tastes are catered for. For many of the key design elements there are two choices:

For me there are two elements of the design that stand out; the case lugs and the oval bezel. There is a delicacy to the design of the lugs which allows them to blend in perfectly with the bracelet, while still looking sharp on a strap. As designer Alexandre Peraldi told me the next day, getting this element right was critical, as many early designs that worked well with the bracelet were less flattering when fitted with the strap. The oval bezel, below finished in mother-of-pearl, is the signature of the Promesse, contrasting to the metal of the case. It’s a beautifully executed asymmetrical design that plays with angles to give the Promesse a classic, yet distinctive face.
The Baume and Mercier Promesse range is due to arrive in Australia in September (in others words, any day now), and you can check out Baume & Mercier’s Facebook page here for updates. Australian pricing starts at $2400AUD for the 30mm quartz steel model on a calfskin strap (Ref. 10185), while the automatic range starts at A$3,800 (Ref. 10182 of all you reference number nerds).

At the top of the range are two 34mm models priced at A$9,100 that each feature a mother-of-pearl bezel decorated with 61 diamonds (0.65 ct) on the bezel and eight diamonds (0.03 ct) on the dial. Of the diamond-duo, Ref. 1066 (Black dial, below left) has a truly spectacular black mother-of-pearl bezel which adds another dimension to the watch, with the dial seeming to float inside its case. While we try not to always pick the top of the range model as our favourite, in this case it’s impossible to avoid.
While the night came to an end following the unveiling of the new collection, we were back the next day to speak with Baume & Mercier Design Director Alexandre Peraldi, who not only talked us through the challenges of creating the Promesse, but also gave some insights into the watches that are important to him.