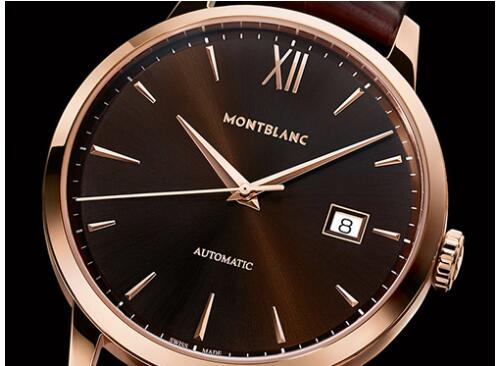 With over a 100-year legacy, Montblanc watch is widely popular for personalized gifts, leather goods, and watches. Originally started by a Berlin engineer and a Hamburg banker, the team steadily grew since the 1900s. Passing down the hands of many leaders and visionaries, Montblanc today is part of the Richemont group; with sister brands like Cartier and Piaget.

Montblanc watch took over Minerva SA thereby also obtaining Minerva’s technical know-how and watching making expertise. In the wake of the acquisition, Montblanc dove deep into watchmaking with the launch of its traditionally made Swiss watches. The collections showcase the epitome of skillful craftsmanship, the finest watchmaking technology, and groundbreaking revolutionary designs.

As the world saw Montblanc’s watchmaking expertise rise to the top, the brand sought to maintain its value: the pursuit of high-quality and craftsmanship. With each passing year,  Montblanc perfects the art of showcasing traditional values of watchmaking while also continuing to upgrade their technical know-how.

Most importantly, Montblanc watches go through the ‘500-hours test’. With an intention to simulate a year’s worth usage, the test cycle puts some of their timepieces to a rigorous certification process. As per the test, selected timepieces go through hours of winding performance & assembly control, continuous accuracy control, functioning test (wear and non-wear periods), general performance and water resistance. Consequently, the culmination of all these efforts is what sets Montblanc apart from its competitors.

Early in the 1900s, Montblanc watch took great pride in manufacturing “high-class and gold” fountain pens. The company briefly worked under the name Simplo Filter Pen Co.  Later in 1910, one of the family members of the company noted a worthy analogy of the company’s success to the highest and majestic peaks in the Alps — the Montblanc. Consequently, Simplo Filter Pen Co. registred ‘Montblanc’ for a trademark for all the future products.

In the same year, the new rebranded Montblanc produced its finest, technically improved, fountain pens. The new design came with a white tip on the pen cap. The white tip in the shape of a star represents the brand’s promise and commitment to maintaining high quality and European craftsmanship. In 1913, the star emblem officially became the brand logo. Subsequently, the emblem marks the seal of performance and the brand’s promise of ultimate performance, sophisticated style and high-quality.

In 1926, Montblanc adapted new and innovative advertising strategies. The name Montblanc started appearing over planes and cars with a big fountain pen. Consequently, the efforts paid off. Over 60 countries came to know about the brand. The same year also saw the expansion of Montblanc into leather products. Following the success with the name Montblanc, the company’s name officially changed to Montblanc Simplo.

After the success of writing instruments and leather products, Montblanc set up about 350 international boutiques across 70 counties. In 1997, Montblanc took part in the Salon International de Haute Horlogerie, a watch fair in Geneva. The craftsmanship and design attracted significant attention from various international jewelers. As a result, Montblanc presented its first-ever handcrafted timepiece, the Meisterstück.

Officially marking the beginning of Montblanc’s watchmaking legacy, the brand set up the Montblanc Montre SA in Le Locle in the same year. Montblanc strategically planned this to showcase to its customers the brand’s commitment to maintaining high-quality and master craftsmanship. The success and widespread call for attention led to the launch of the ‘Meisterstück Sports’ watch collection with seven robust timepieces.  The success of Meisterstück sports collection paved the way for the creation of the Institut Minerva de Recherche en Haute Horlogerie in Switzerland in 2007.

Ever since 1858, the Institut has served as the headquarters for Minerva. As Montblanc acquired Minerva SA, it also obtained the knowledge of watchmaking and technical know-how. Prior to Montblanc’s intervention, Minerva’s uninterrupted 150 years of watchmaking history is worth mentioning. No other watchmakers possessed the powerful combination to produce artful handmade watches with traditional Swiss methods while also keeping pace with state of the art engineering. This is what Montblanc acquired, sealing the deal on becoming one of the leading luxury Swiss watchmakers we know today.

In 2008, Montblanc then launched its first-ever fully in-house designed, developed and manufactured MB R100 caliber at Salon International de la Haute Horlogerie in Geneva. Following this, Montblanc integrated the first-ever movement into the Nicolas Rieussec Monopusher Chronograph timepiece. With twin rotating seconds and minute counters to reflect the past, the timepiece recalled the design of the Inking-Chronographer from 1821.  The collection pays fitting tribute to the inventor of chronography, Mr. Nicolas Rieussec. Rieussec, in his days, was also famous for making watches for King Louis XVIII.

As Montblanc proudly marched into the watchmaking industry, the brand set out to raise new standards every time a new collection launched. This applies to the Metamorphasis collection as well. In 2010, Montblanc developed and manufactured the Villeret timepiece. The collection was the brand’s effort to safeguard the traditional Swiss watchmaking methods. In light of this effort, the watches came with a never seen before design and innovation. With almost fifty individual components that perfectly synchronize together to make a revolutionary design. As the name suggests, the face of the watch metamorphosizes into two. One, the classic date regulator and two, an elegantly designed ‘mono-pusher chronograph with horizontal clutch and column wheel’.

Yet again in 2011, Montblanc pushed the boundaries of innovation even further with the launch of Tourbillon Bi-Cylinderique MB 65.63 caliber watch. For the first time ever in the history of watchmaking, Montblanc designed and produced this timepiece with tourbillon and two cylindrical balance springs. Originally, such features found its place within the marine chronometers in the 18th century. However, Montblanc reinvented the design to fit into a timepiece, thereby, expanding their pinnacle to further heights.

Montblanc set its foot in watchmaking much after many successful luxury watchmakers. Nevertheless, the brand’s long-standing vision and philosophy have helped them progress rapidly as watchmakers. The past century reflects Montblanc’s promise to push the boundaries of innovation. Ingenuity remains the driving force of Montblanc’s success.

Over the years, the name Montblanc has been synonyms with personalized gifts. Nevertheless, Montblanc’s vision to provide high-standard watches have remained on top of the market. With every new collection, Montblanc reaches for newer designs and upgraded technology. In doing so, the brand has not compromised on traditional values and methods. Let’s take a closer look at their top collection available today.

Montblanc grew to be a household name for luxury and personalized gifts. As a result, customers loyal to Montblanc always value the brand for maintaining its high-quality, skillful design, dexterity, innovation and traditional Swiss watchmaking methods. As the brand name grew, Montblanc’s success never compromised on the spirits of the past.

Ever since its inception, Montblanc has held strong to its commitment to art, culture, and innovators. Every collection is a tribute to the brand’s source of inspiration, in one way or the other. Montblanc set out to conquer the world of watchmaking and never did they derail from the plan. Over the year, Montblanc has not only manufactured traditionally made watches but has embodied modern trends for robust use in extreme conditions.

Elegance, simplicity, but yet modern, functional and superior – this has been the reputation of Montblanc ever since it took over Minerva’s expertise and strives to uphold that even stronger today.