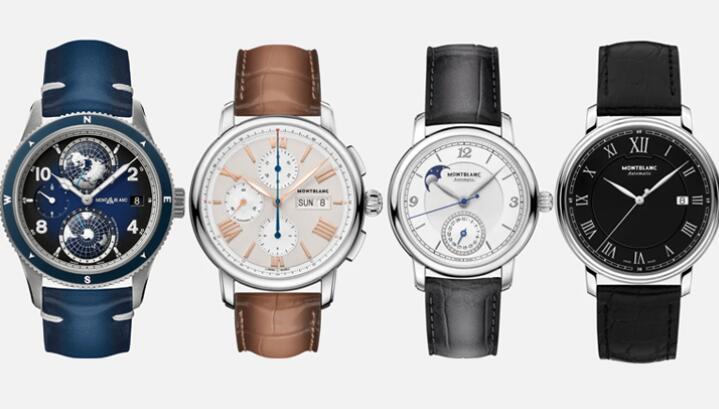 Montblanc’s 100 years of brand excellence speaks volumes about the brand’s legacy. However, despite Montblanc’s long-standing reputation as a provider of prime luxury goods, the brand remains a rookie in watchmaking. Montblanc watches officially launched in 1997, particularly with the celebrated Meisterstück model. From there, the brand began providing its market not only high-quality pens but also carefully crafted timepieces. But as a relatively new player in the watchmaking industry, are Montblanc watches any good? Let’s take a look at how the brand went from producing pens to timepieces in this brief journey through Montblanc’s rich history.
Anyone interested in collecting and investing in luxury consumer goods would know the name Montblanc. Unsurprisingly so, this brand mastered craftsmanship of luxury items. They package each product not only with the signature of affluence but also with the artistry that comes with each item. German-born brand Montblanc started out as a provider of superior pens that piqued global interest. Today, the brand categorically expanded its selections with various products, such as leather goods, travel essentials, and of course, watches.

What makes Montblanc stand out at all as a brand lies in the fact that each Montblanc item perfectly captures every man and woman’s personality through its products. And we’re not only talking about the wide range of designs they provide; we also highlight the personalisation that goes into every Montblanc gift. To own a Montblanc pen, bag, or watch doesn’t only strap you with an extravagant brand name but also lets you have a piece of yourself through tangible forms.

Today, Montblanc hosts three main workshops: Hamburg for writing instruments, Florence for the leather goods, and Switzerland for its timepieces. With that said, it’s easily understandable how, despite the brand’s newcomer status in the industry, it remains a strong competitor to this day. Montblanc watches boasts Swiss excellence combined with its brand values focused on tradition, storytelling, elegance, and preservation.
Montblanc’s history traces back to the beginning of the 20th century. At the time, the global economy boomed through the rise of local businesses. As with the rise of such trends, Hamburg banker Alfred Nehemias and Berlin engineer August Eberstein began producing pens in 1906. Albeit simple, these pens served as foundations for the brand we know and love today. However, after a short period of time, Wilhelm Dziambor, Christian Lausen, then Claus Johannes Voss took over the business. The management change led the company to new directions and to its later success.
Montblanc began manufacturing high-class gold fountain pens. Under the name Simplo Filter Pen Co., the company released its first safety fountain pen, Rouge et Noir. Succeeded by a pen possessing the name that would be the company’s identity, Simplo Filter Pen Co. proved a huge success.

In 1910, one of the family members of the company owners created an analogy that denoted the company’s success in the writing instruments department. The company’s success and the quality of its products, as the story goes, reached the highest and majestic peaks in the Alps. Yes, we’re talking about the imposing Mont Blanc. The same year, the aptly named Montblanc fountain pen launched. The same year, 1910, also marked the official registration of the name Montblanc for all its products as we know it today.

Three years after the establishment of the brand name, Montblanc registered a trademark that remains familiar to this day. The brand started carrying the white six-pointed snowcap with rounded edges, a symbol of the Mont Blanc snowcap from above. The numbers 4810 also appears as a recurring symbolism of the brand referring to the Mont Blanc’s height in metres.
Most people who hear of the brand name Montblanc would easily associate the brand with the Meisterstück. “Masterpiece” in English, the Meisterstück became a pivotal part of the brand’s legacy beginning in 1924. The brand launched the Meisterstück, a writing instrument celebrated not only by the industry but the world. Thus, its success in global exports.

This also links to the 1926 efforts of the brand to adapt new advertising strategies. Montblanc propagated its name by plastering the brand identity on planes and cars alongside a huge fountain pen. As a result, over 60 countries learned about the brand.

In 1935, Montblanc’s leather goods expands as a separate division. This allowed them to cater to more products and therefore more clients around the world. Then, in 1996, the Meisterstück Jewellery Collection was launched, including a line of luxury men’s accessories.
Montblanc’s success proved unparalleled with 350 international boutiques across 70 countries. At the time, the company only had writing instruments and leather products available in its catalogue. So, to further expand the company’s ventures, Montblanc launched a collection of men’s accessories aptly named Meisterstück Jewellery Collection.

In 1997, the Montblanc Montre S.A., in Le Locle, Switzerland, began producing timepieces. These watches observed Swiss excellence in watchmaking but with the company’s German philosophy in product creation and craftsmanship. The marrying of two factors resulted in Montblanc’s daring move to introduce itself in the world of watchmaking through Geneva’s leading watch fair.

The company participated in the Salon International de Haute Horlogerie in Geneva, rebranded in 2020 as Watches and Wonders. This trade fair included brands from all over the world to participate in presenting the best in watchmaking. The bold move garnered much-deserved attention from various international jewellers and watchmakers. And during the fair, Montblanc introduced the Meisterstück watch.
As with the Meisterstück Pen, the Meisterstück watch upheld the high standards when it comes to quality with exemplary craftsmanship anchored with it. This piqued the curiosity of many. As more people learned of the timepiece, it helped Montblanc grow as a powerful contender in the world of luxury watchmaking. The success of the timepiece called for the launch of the Meisterstück Sports watch collection with seven iterations.
Years after the success of the Meisterstück Sports watch collection, Montblanc acquired a leader in Swiss watchmaking. Institut Minerva de Recherche en Haute Horlogerie in Villeret, Switzerland, in 2007 became a sentimental addition to the brand’s legacy. This further solidifies the brand’s commitment to producing quality timepieces.

This acquisition allowed Montblanc to harness the more than 100 years of watchmaking excellence through the manufacture. In 1858, the Institut served as a headquarters for Minerva. Minerva, at the time, boasted its status as the leading specialists for professional watches. The company led in measuring small time intervals with great precision. Minerva saw the innovations not only in Swiss watchmaking but timekeeping history in general. It was one of the first companies to craft a pocket watch with a crown. Since then, it became a prominent name in professional timekeeping.

With the know-how earned from the Institut, Montblanc launched the MB R100 calibre at the SIHH (now Watches and Wonders). This proves as a momentous bit of the brand’s legacy as the first movement fully developed and manufactured in-house at the Institut. The company powered its Nicolas Rieussec Monopusher Chronograph with the calibre, a timepiece named after the inventor of the chronograph, Nicolas Rieussec. The timepiece echoed the 1821 Inking-Chronographer design through twin rotating seconds and minute counters as what appears to be a reflection of the past.
As the Villeret manufacture continued rolling in new and improved tech in watchmaking, Montblanc remained a strong force in the industry. The strategic acquisition allowed it to promote new standards with every new timepiece launched. In 2010, at the Villeret manufacture researched, developed, and produced the collection. It served as the brand’s efforts in safeguarding traditional Swiss watchmaking methods through an actual model.

The Metamorphosis had about 50 individual components that worked perfectly in sync. As its name suggests, the Metamorphosis transforms between two watch faces. Firstly, a classic date regulator that perfectly works as a dressy timepiece. Then, a mono-pusher chronograph with a horizontal clutch and column wheel.

To further the brand’s innovative feats, in 2011, Montblanc released the Tourbillon Bi-Cylindrique. Powered by the MB65.63 calibre, this became the first-ever watch to possess a tourbillon with two cylindrical balance springs. Done through miniaturising the escapement, the same technique can be found in 18th-century marine chronometers. Montblanc then introduced the escapement to a tourbillon.

Then, in 2013, the ExoTourbillon Rattrapante was launched. Known as the brand’s most complicated watch yet, the watch not only had a split-second chronograph. It also had four-minute ExoTourbillon, technology exclusively patented by Montblanc itself.
Now that we’ve established the excellence of Montblanc’s brief history in watchmaking, let’s get to the timepieces the brand boasts today. It’s an exciting journey as we go through innovative designs and technology with each collection.
To pay homage to Minerva’s beginnings, the Montblanc 1858 was launched, featuring watches stripped down to the hour and minutes and grand complications. The collection carries a distinct vintage style chronographers as well as classic timepieces.

The collection includes three main types of watches. Firstly, the vintage watch series with an hour and a minute indication. Secondly, the Monopusher Chronograph — a staple on Montblanc’s collections. And finally, the Montblanc 1858 Geosphere, dedicated to the Seven Summit mountaineering challenge. The 42mm titanium watch included icy white design details that take inspirations from the freezing glaciers.

Montblanc continues to embody Minerva’s legacy by taking inspiration from its 1940s and ’50s collection. The Montblanc Heritage collection includes elegant timepieces with a touch of modern design and technology. The line includes timepieces of different forms and functions.

All the watches in this collection included e-straps that allowed smart function. Among those include activity tracking and smart notification as well as remote control functions. The timepiece exemplified Montblanc’s aim to harness modern technology and associate it with traditional watchmaking.
To cater to the more feminine penchant, the Montblanc Bohème features dainty timepieces with grand complications. Among the timepieces in this collection include the Montblanc Bohème Day & Night with a moon phase dial and the Date iteration with a date dial at 6 o’clock.
Venturing into smartwatch tech, Montblanc launched the Summit 2 in 2017. Along with TAG Heuer, the brand pioneered the luxury smartwatch industry. The Montblanc Summit 2 combined the most advanced technologies with Swiss watchmaking. Using the Android Wear 2.0 OS, the watch is powered by the Qualcomm Snapdragon Wear 2100 processor. There’s a lot to unpack with this timepiece’s capabilities. From activity tracking to smart function, it is perhaps the most advanced technology Montblanc has ever revealed.

With eight unique timepieces forming part of this collection, Montblanc has outdone itself. The Summit collection comes equipped with a myriad of functions and sensors. Ranging from heart monitoring, daily step count, navigation and weather sensors, Summit offers you a multitude of functions to choose from.
The question remains to this day, especially among sceptics and lovers of the oldest luxury watch brands such as Patek Philippe, Rolex, and Omega. Are Montblanc watches good? Is it really worth it to buy a Montblanc watch? Perhaps, the answer depends on the ultimate goal of your purchase.

If you’re buying luxury watches as a form of investment, perhaps, Montblanc watches aren’t the smartest choice given the selection of brands to choose from. Montblanc watches range from four to a five-digits at most. They’re not as pricey as a Rolex but not can’t get as cheap as a Seiko either. With Montblanc only beginning to establish a legacy in itself, it’s a nice thought to purchase one yourself today. There are very promising timepieces from its collections but it’s still not at the same pedestal as, say, Audemars Piguet or Vacheron Constantin. It remains a rookie but a strong one at that.

However, if you’re looking for a timepiece with promising features, Montblanc is perfect for you. Montblanc watches are still luxury watches with great attention given to each timepiece assembled in its manufacture. The great thing about Montblanc watches is that despite its already established name, it remains dedicated to excellence. You won’t only be looking at a fashionable watch with a luxury name stamped on it. You’ll be experiencing the excellence of Swiss watchmaking.