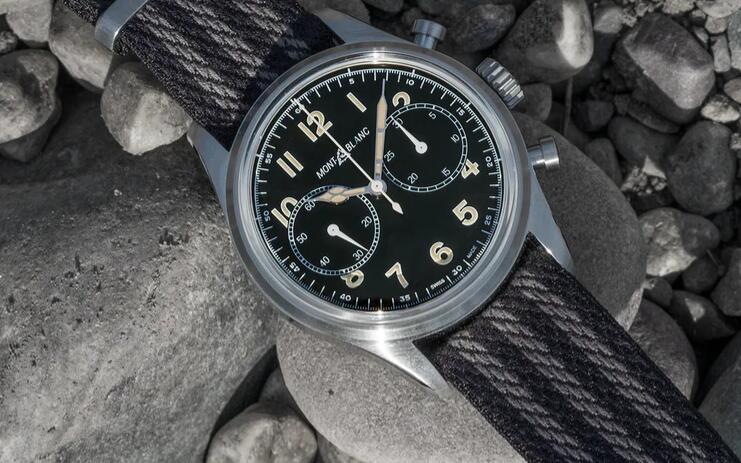 The Montblanc 1858 Automatic Chronograph is a sporty two-register chronograph, plain and simple, without any unnecessary bells and whistles (and, importantly, no date). If there were to be a case for not messing with a successful formula, this would be it. The 42mm steel or bronze chrono has two registers, with a 30-minute totalizer at three o’clock and a running seconds register at nine, as well as vintage-tinged cathedral hands and beige lume on the hour markers.
The chronograph has been the hot complication over the last few years. We saw Montblanc go long on chronographs last year, with the introduction of the TimeWalker collection, and that continues this year. While the time-only 1858 definitely doesn’t feel like an add-on (while the time-and-date TimeWalker sort of did), the chronograph still feels like the centerpiece of the collection. Getting the formula right with this watch is pretty important to the success of the collection overall, and at first glance it seems like Montblanc has done its job.
The stainless steel version with the black dial is going to be the 1858 that ticks the most boxes for the most people, if I were to offer a guess. However, to me, the standout here is the bronze-and-champagne version of the 1858 Chronograph. It manages to take a relatively bulky sports watch and make it feel elegant and refined through the soft tone-on-tone color scheme. It ends up feeling like a sports watch for the guy who doesn’t usually wear sports watches, and it’s definitely a watch that’s going to inspire a lot of “What’s that?” questions.
Montblanc 1858 Automatic Chronograph arrived at SIHH this year with a new collection that takes its design inspiration from Minerva, the esteemed Swiss watchmaker with a specialty in chronographs and stopwatches that Richemont purchased way back in 2006. When Richemont bought Minerva, the group took the unexpected step of folding it into Montblanc. At the time, Montblanc was already one of the largest brands within the Richemont Group, with a category-leading fine writing instruments business and a burgeoning leather goods trade to boot. Montblanc had made recent inroads in watchmaking, opening its first manufacture in a sprawling Art Nouveau mansion in a traditional center of watchmaking – Le Locle, Switzerland – but it lacked the august history in the category that Minerva had. With Minerva now making Montblanc watches, seemingly overnight Montblanc’s watchmaking abilities grew exponentially. Today, we’re looking at two watches that point to a period of watchmaking history that Montblanc inherited through its acquisition of Minerva.
The two watches right here indeed have the look of vintage timepieces of years’ past, but with a contemporary size, sturdiness, and build – including a sapphire crystal and a modern automatic chronograph movement – that one would expect from a modern sport watch. These watches are priced at $5,000 for the bronze (below) with the steel version coming in at $4,300.
One of the first things that I noticed about each of these two new chronographs was their weight and the feeling of quality that it conveyed. I was also surprised by the amount of patina the bronze-cased version had already acquired in the relatively short time that it has been circulating as a press sample. It’s well on its way to looking like an old good thing – which is, I suppose, the main point of making watches from this material that tends to evolve over time. Offering a vintage inspired chronograph like this in a bronze case seems like a good move, and with its price difference of just $700 over the stainless steel version, this is the one that feels like the better value proposition.
In both variations, the dial and hands look to be of very decent quality. In the case of the stainless steel option, we’re looking at a black bi-compax dial with large sub-dials creeping over the 10, eight, two, and four hour numerals, with three and nine being occluded altogether. These frame a Montblanc logo that’s cut in half – “Mont” and “Blanc” – with a snowcapped mountaintop in the center. The large, luminous numerals and vintage-inspired hands make for watch that’s easy-to-read at a glance, and the very nicely articulated minutes/hours chapter is a nod to Minerva’s history as a precision timer. The Bronze 1858’s dial has a patinated metallic look that visually echoes the black dial of the steel version. This watch seems to me to be aimed squarely at the enthusiast market. Oh, and how ’bout that tastefully omitted date window? I’m sure that’s going to win this guy some fans among people reading this story.
Visually, these watches are nice complement to the 1858 line and its Minerva pedigree, but from a cost standpoint, they’re going to set you back a good deal less money than some of the other models in the line. That’s largely because these two variations are powered by an SW500 chronograph movement supplied by Sellita. This movement has been around for several years now, though it remains one of the more recent of the major Sellita movements to come on line. The basic idea with this caliber is that it is a durable, affordable cam-operated chronograph that is essentially interchangeable with the Valjoux/ETA 7750 movement.
When you hold these watches up and give them a shake, you get that familiar whirring sound and sensation that is the hallmark of the 7750, a unidirectionally winding caliber beating at a standard 4 Hz. There is absolutely nothing wrong with this movement from Sellita. It’s a fine option to power a watch in this price range, in my opinion. Still, it has nothing on the beauty of the calibers produced at the erstwhile Minerva manufacture (now Montblanc Villeret), so Montblanc has mercifully closed the casebacks of both variations and instead given each a relief engraving. The caseback of each version, regardless of its case material, is made in steel.

The case work itself is also very nice, and if you look closely, you’ll find details in their finishing that surpass what you might expect from watches in this price range. Take, for example, the stainless steel version’s beveling and the brushed finishing on its surfaces. The cases themselves are a bit large at 42mm in diameter, and they feel large on the wrist, with a thickness approaching 15mm. As you’d expect from a modern interpretation of a vintage chronograph, the sapphire crystal on the 1858 Automatic Chronograph is domed to recall earlier plexiglass crystals.
One area where I do feel these watches could be improved regards the straps, which look quite nice in these images but lacked the supple tactility of a finer quality strap. They look the part, but they don’t necessarily feel it. They also use a deployant clasp, which is actually one of the nicer deployants I have come across in my last several watch reviews, especially if you take cost into account. The clasp features an excellent and easy-to-use fine adjustment setting that lets your wrist have that extra half centimeter of breathing room on warmer days. There is also a striped fabric strap option (not seen here). But if I were buying this watch, I’d probably opt for a replacement strap.
The Montblanc 1858 Automatic Chronograph is a solid nice, reasonably priced automatic chronograph. And in the case of the bronze option, one of the more interesting and appealing timepieces currently out there in the $5,000-and-below price range.