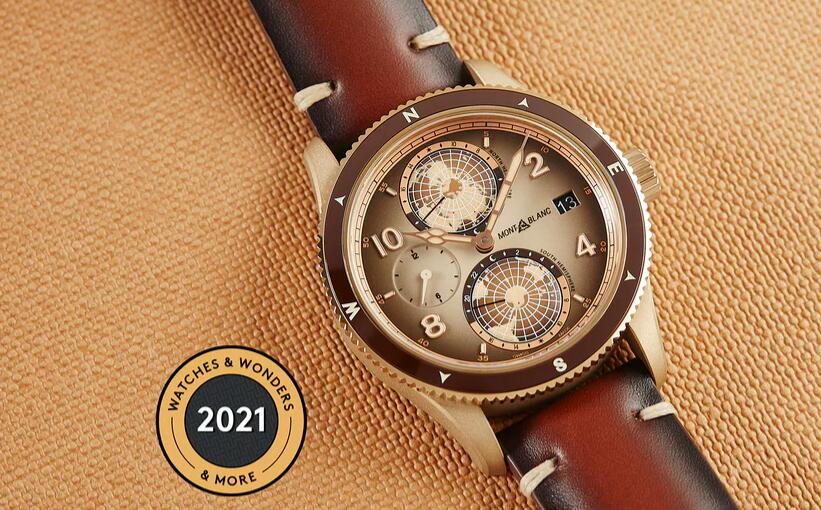 Montblanc continues to grow the 1858 collection with a new Montblanc 1858 Geosphere Limited Edition release at Watches & Wonders 2021. This is good news that should quiet any questions about the model’s future in the wake of the recent departure of Davide Cerrato, former Managing Director of Montblanc Watch Division (and the architect of the current 1858 line). With a new MD on board (Swiss watch industry veteran Laurent LeCamp; stay tuned for more from him later this week) and the recent introduction of legendary mountaineer Reinhold Messner as ambassador, the fate of the 1858 should remain in more than capable hands.

The latest Montblanc 1858 Geosphere Limited Edition features a sandy-beige fumé dial with light and dark brown accents that’s directly inspired by Messner’s mind-boggling 2004 solo trek across the Gobi desert, during which he hiked more than 1,200 miles in a five-week period.
Montblanc once again calls on bronze for the case (an alloy that has become somewhat of a signature of limited-edition Geosphere releases), and the watch’s functionality remains part and parcel with the established Geosphere identity. This means split hemispheres that indicate the time anywhere in the world, a 12-hour second time-zone display at nine o’clock, a date window at three o’clock, and a bidirectional rotating ceramic bezel that can be used as a compass in a pinch. The watch’s inspiration is hammered home by a caseback illustration of the Gobi Desert’s famous Flaming Cliffs. (For more on Messner, check out James’s recent coverage here.)
There’s a good bit of technical work worth highlighting as well. Montblanc developed an in-house world-time module (which it first showcased in 2015 inside a six-figure, tourbillon-laced timepiece) for the dueling hemisphere construction that – in the current-gen Geosphere – is then placed on top of a Sellita ébauche. Additionally, the MB 29.25 movement undergoes the brand’s underrated Laboratory Test 500 certification, which involves a battery of tests that the fully cased watch has to endure over a three-week period to simulate real-life wearing conditions.
I’ve become quite the fan of the Geosphere since it was introduced a few years ago. I’ve always found watches that incorporate multiple time-zones to be endlessly compelling (and I know I’m not alone in that compulsion), so it’s not surprising that I’ve been more than happy to welcome a new contender to the table. And since its 2018 debut, it has been a pleasure to witness how Montblanc has slowly – but surely – iterated on the Geosphere. I personally found last year’s combination of a blue dial, a titanium case, and a beads-of-rice bracelet to be the most attractive Geosphere yet.
Even though I’m not much of a trekker, the latest Montblanc 1858 Geosphere Limited Edition has a number of charming elements to distinguish it from previous releases in the line. The brown-to-beige lacquered dial combines with the bronze case profile for a clean and compelling look that feels nice and warm, almost reminiscent of toffee or caramel.
It’s also worth pointing out that, while aesthetically complex with multiple textures and a rich sense of depth to the dial, the Geosphere has always worn rather nicely for a travel-time sport watch with a self-winding movement. At 42mm across and with a thickness under 13mm, the Geosphere charts highly in terms of on-the-wrist comfort. Which should come in handy for your next epic journey.