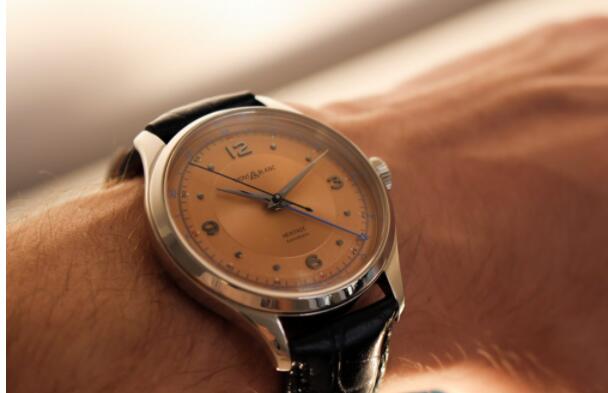 This week on “Vintage Eye,” we turn our focus to Montblanc and its popular Heritage collection, specifically the recently launched Montblanc Heritage GMT. This model was first released in January 2019 as part of the Heritage collection’s unveiling at SIHH (now Watches & Wonders), and has since become one of the collection’s few permanent residents as Montblanc experiments with various limited editions within the series since its initial debut.
The Montblanc Heritage GMT collection, which largely draws its influence from various vintage Minerva watches from the 1940s and early ‘50s, today is comprised of time-only models, day-dates, and monopusher chronographs (as below), as well as today’s GMT, which has caught the eye of many as a classical- looking travel watch with a serious vintage-inspired charm. The collection is one of the most interesting interpretations of vintage Minerva design influence to date. (The historic Minerva watch manufacture, after its acquisition by Montblanc parent company Richemont in 2006, has steadily been steadily incorporated into Montblanc’s watchmaking, more explicitly at first and now as a somewhat subtler influence.)
Taking a look at its details, the Heritage GMT uses a 40-mm polished steel case with an alternative logo-signed push/pull crown to its side, and a thin, angled bezel surrounding the face. Underneath the expansive sapphire crystal (made to seem larger by the shape of the bezel) is a vintage-inspired dial available in either a salmon colorway or a more classical-looking white. The dial features a multi-textured look, with a smooth sunburst for the outer edge and middle aspects and a rougher middle section, together offering a fascinating contrast. The dial uses applied Arabic numerals for the quarter-hours and applied dots for the remaining markers, while a small printed minute ring is placed just outside these positions. A contrasting blue GMT analog ring runs on the outermost edge of the dial. Passing over the dial are two dauphine-style hands for the hour and minutes, both lume-filled, and a thin black pointer to count the seconds. Additionally a blued steel, skeletonized arrow pointer serves to indicate the second time zone. The watch is powered by the Montblanc Caliber MB 24.05 (based on the ETA 2893-2), an automatic movement featuring a 42-hour power reserve and protected behind a beautifully engraved solid caseback featuring an image of the old Minerva workshop (vintage ad, below).
The Montblanc Heritage GMT is priced at $2,850 on a leather strap and $3,060 on a steel mesh bracelet, though the salmon dial version is only available on the leather strap (the specific model I reviewed was strapped to an after-market, black alligator band). Montblanc is currently sold out of the model through its official online shop, though the piece can be found through some online dealers as well as at local authorized Montblanc boutiques.
As the name of the collection indicates, Montblanc’s Heritage collection is the brand’s foremost effort at vintage-inspired modern watches. However, unlike most brands, which often tie such new models directly to specific vintage references, Montblanc instead opts to attribute its Heritage models to time periods rather than any one particular watch. With that said, however, the collection as a whole clearly takes much of its influence from Minerva chronographs from the 1940s and early ‘50s (one such example, circa 1940, is pictured below, via Christie’s). Along with these obvious influences, Montblanc adds a number of a contemporary design pivots that help cater the watch towards a modern consumer.
When I initially saw the Heritage collection, I thought the multi-textured dial was a modern invention; however, looking through historical evidence it seems the Minerva brand did play with multiple textures on its dials in some form during the source time period The example in the vintage 1951 ad pictured below also features a highly similar case shape, with its thin polished bezel and expansive dial, as well as hosting a few other similarities — like the the shape of the hour markers and design of the outer telemetric scale and minute ring. Montblanc likely drew much of the modern watch’s vintage inspiration from a model like this, and upgraded it by using applied rather than printed hour markers, adding a finer finish to its multi-textured dial, and taking cues from other vintage chronograph examples for its outer minute ring and GMT scale.
There are a few more vintage-inspirations on the model, as in the blue, red, and white accents that speak to vintage telemetric chronographs previously produced by Minerva, as well as the common practice during the mid-century of using blue steel accents on watches in general — though the blue on the Heritage watch is more akin to a light blue paint rather than a proper blue steel. The final vintage note is in the salmon-pink dial itself, which I also initially believed to be a modern invention, but actually takes its influence directly from vintage models from the mid-20th century.

Despite the obvious vintage-inspired theme throughout the watch’s design, this model upon closer inspection is clearly a modern creation, more akin to a remix of historical influences than a direct reissue or reinterpretation of a recognizable, historical watch. The most obvious indicator of this is its use of a GMT mechanism, which itself seems to hearken back not only to the vintage chronographs of the 1940s and ’50 but also to analog-date triple calendars watches popular during the source era. This is partly due to the stand-alone GMT complication not being truly “invented” until 1954, when Rolex introduced the GMT Master ref 6542 in collaboration with Pan American Airways.
The modern watch also measures 40 mm in diameter, which is quite large for any vintage “time-only” piece (which a GMT resembles moreso than a chronograph). But one could argue the 40-mm sizing is more similar to the size of a chronograph made in the era from which the modern watch draws most of its direct influences. Besides these traits, the standard updates seen in most vintage-inspired watches are present: the finishing on both case and dial are excellent and in-line with the quality one expects from Montblanc; the crown and dial feature Montblanc signing rather than Minerva; and the caseback, while using a solid construction rather than a sapphire exhibition style, is made distinctive with its homage engraving.
I have spent quite a bit of time with this watch. I obtained it at the start of 2020 and — sans the various watches I regularly have in for review and a few other models in my collection — I have spent much of my time wearing it. So unlike most watches, with which I normally spend about two weeks (a few pictured below, all during the same photoshoot period), I have had an opportunity to get rather comfortable with the model over the past six months or so.
The watch itself is beautiful, and the multi-textured salmon dial keeps you engaged long after the initial “new watch fever” diminishes. It also, surprisingly, works quite well with a variety of strap options and colors. I have most recently been wearing the model on the aforementioned black alligator, but its standard grey strap goes excellently with the salmon color, as does a steel mesh or Milanese bracelet. I have also thought to find a lighter beige strap or something suede and green, though I’ve yet to do so. As I’m drafting this specific article, I thought it would be be fun in the spirit of a true travel watch to strap it on something a bit more sporty, so I’ve now opted for a black tropic rubber strap, which I think walks the line between something a bit more formal and more practical in terms of straps.
For all its somewhat sporty style and vintage chronograph influences, the watch at its core is more a formal watch than a sports watch. Its bezel is quite slim and the crystal rather expansive, giving the dial of the watch a majority of its wrist presence and pushing the polished steel case to be more of a silhouette. This is not to say the model isn’t suitable for everyday wear, but it is something to keep in mind if your “everyday” includes rougher work. The watch does sit close to the wrist at only 11.8-mm in thickness, so bumping it has become less of a concern over time, but that the sapphire remains somewhat vulnerable to the odd table edge and door frame is relevant.
Finally, date windows on vintage-inspired models are quite controversial, but at 40 mm and with the model not taking direct inspiration from any particular model, a date window at 3 o’clock, or even at 6 o’clock like the day-date model, likely could have boosted the design without much criticism. How this particular effort might have been accomplished while keeping the watch under $3,000 with its GMT mechanism remains to be seen, but such a model could at some point be an addition to this fast-growing collection.
The Montblanc Heritage GMT collection as a whole is quite interesting, encompassing a fascinating group of watches, and almost every release within the relatively new series has garnered positive attention in its own right. Many writers have dubbed the watches, most notably this particular GMT model, as value propositions — bringing together a fascinating group of vintage and modern traits together with a travel-ready GMT mechanism and a very attractive dial. While I personally have trouble describing any watch over $2,000 as a value proposition, understanding the relative value of things, I do see this watch a valid entry into the luxury end of the watch market, and a high quality one at that.
It is quite likely Montblanc Heritage GMT will continue to expand the Heritage collection. Whether that entails using the salmon and white colorways (as on the two Heritage Automatics, below) applied to new complications and limited editions, or whether that will include new colorways or materials applied to the existing designs remains to be seen. The collection has also proven that there is still an appetite for vintage-inspired pieces, but also that they don’t necessarily need to recall direct influences to be successful. That Montblanc has taken influence from historic Minerva designs, brought them into the modern century, and made them its own remains an impressive feat, and could well portend the lasting impact of the neo-vintage trend into the 2020s.