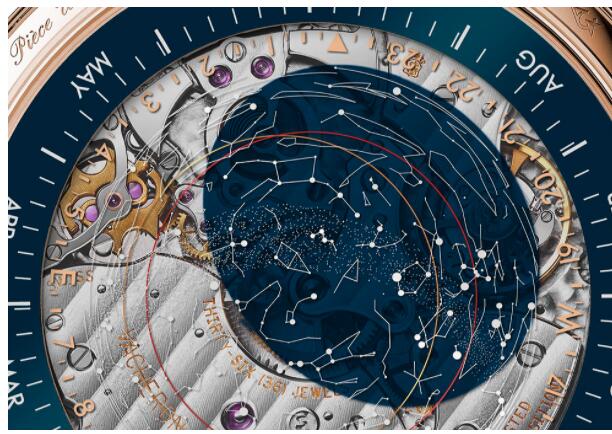 Vacheron Constantin has given its series of one-of-a-kind chiming watches the poetically evocative name “La Musique du Temps,” and this year’s addition to that ultra-exclusive collection, unveiled recently on the Watches & Wonders 2020 virtual platform, may be the most ambitious yet. The Les Cabinotiers Astronomical Striking Grand Complication features no less than 19 complications, displayed on two dials, all built around the foundation of the minute repeater function and incorporated into a caliber less than 8 mm thick.
Vacheron Constantin Les Cabinotiers Astronomical Striking Grand Complication
In addition to the minute repeater, the watch includes a perpetual calendar with moon phases,; indications for solar, civil, and sidereal time; and other astronomical displays including zodiac signs and indicators for the seasons, solstices, and equinoxes.

Framed by a 45-mm rose gold case, the main dial in opaline blue hosts an array of features: central hands for the civil and solar time, the latter identified by a serrated-edge “sun” pointer, both hands together serving as a running equation-of-time indicator; a serpentine hand indicating the date in a subdial at 3 o’clock; pointer-type displays of sunrise and sunset times, accompanied by a linear day-night indicator at 6 o’clock; the current day, month, and leap-year in apertures between 12 and 12 o’clock; and an aperture at 9 o’clock for the moon’s phase and age and day-night indicator. The Zodiac signs are tucked away in a small curved window at 4:30. The difference between a solar and civil day ranges between -16 to +14 minutes per day depending on the time of year, so both times can be read simultaneously on the central hands, which intersect each other only the four times per year that the two times are equal.
The watch has a total of 19 complications displayed on two dials.
On the reverse side is a sky chart made up of two superimposed sapphire disks on which to track the sidereal time (a sidereal day is defined as the time it takes the Earth to make one complete 360º rotation, or exactly 23 hours, 56 minutes, and 4 seconds). One is a mobile disk bordered by a sidereal time scale that rotates in tune with the earth and features an off-centered blue ellipse. The other is stationary and emblazoned with the “celestial vault” of Milky Way constellations. The aforementioned blue ellipse serves as an indicator of the constellations, while two other elliptical indicators on the moving disk, a white one for the celestial equator and a red one for the ecliptic, track the Earth’s inclination and orbit. The moveable disk rotates daily by four minutes in relation to the other disk and together they provide a view of the sky in motion as seen from a given point on Earth.
The manually wound Caliber has 600 components.
One of the very few movements to offer a minute repeater (activated by a slide on the left side of the case) as well as solar, civil, and sidereal time indications (with a sky chart corrector button below the crown), manufacture Caliber 1731 M820 uses no less than 600 components to drive its array of astronomical complications yet comes in at a super-slim 7.84 mm thick. Bearing a power reserve of 60 hours, the manual-winding caliber also boasts the high-horology decorative finishes that earn it the prestigious Hallmark of Geneva. This unique timepiece (price upon request) is delivered on a blue Mississippi alligator leather strap with a rose gold folding clasp. As an added bonus, continuing the “music of time” theme, the watch comes with an original sound print of its repeater conducted by the famous Abbey Road Studios, whose recent partnership with Vacheron Constantin began with the launch of the FiftySix collection in 2018.
A sky chart in the back maps the constellations.