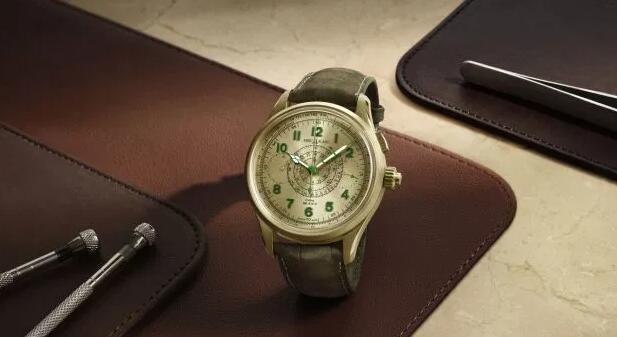 Montblanc unveils the Montblanc 1858 Split Second Chronograph Limited Edition 18 crafted out of an exclusive and innovative 18 K gold alloy called Lime Gold, a true watch for connoisseurs who likes distinctive vintage timepieces. Precise, legible, and robust for use in extreme conditions, the legendary professional Minerva watches from the 1920s and 1930s were conceived for military use. Inspired by these historical ones, the Montblanc 1858 product line pays tribute to the Minerva heritage. The Montblanc 1858 timepieces are designed and conceived as tool watches for mountain exploration and leaning into the global trend of enjoying the outdoors and nature.

It is the first time that a watch Maison unveils a model with this colour of gold fondly named Lime Gold thanks to its deep golden colour that veers towards a pale yellowy green. The Lime Gold colour is made of a special alloy composed of 18 K Gold (Au 750‰), Silver (Ag 238‰) and Iron (Fe 12‰) that provides the distinctive colour giving a true vintage aesthetics.

To match the colour of the new 44 mm 18 K Lime Gold case, the Montblanc 1858 Split Second Chronograph Limited Edition 18 features a distinctive gold-coloured dial with sunray finishes. Providing great readability and vintage style, the monochrome aesthetic is combined with contrasting green-coloured elements of different tones such as the luminescent cathedral-shaped hour- and minute-hands, the minuterie, the central split-second hand, the tachymeter and telemeter scales, as well as the historical Montblanc emblem at 12 o’clock. In order to give a three-dimensional look both at day/night, the Arabic numerals are fully made of Super-LumiNova with a special patented process that encapsulates the luminescent material and create a ‘monobloc’ shape without any outlines. Gold-coloured has been chosen for the central chronograph second hand as well as for the chronograph 30-minute- and small second-counters.

The glass above the dial has an anti-magnetized treatment on the inside top sapphire crystal to enable greater precision of the chronograph’s two second hands.

Like on the original timepiece, the Montblanc 1858 Split Second Chronograph Limited Edition 18 has a telemeter scale that runs around the dial. The telemeter was a common feature on the legendary Minerva chronographs and adds both function and a vintage touch to this new watch. A telemeter makes it possible to measure the distance of a phenomenon which is both visible and audible, like the lightning and thunder in a storm. The watch also has a tachymeter (base 1000) at the centre of the dial in a colimaçon (snail shape) which lets the user measure a length of time of up to three minutes instead of one minute as it is the case in traditional chronographs. The tachymeter indicates the speed of a moving object, such as a car, over a known distance.

The case back reveals the Manufacture monopusher chronograph calibre MB M16.31 taking its inspiration from the original Minerva calibres 19-09CH from 1909 and the evolution, the 17-29, developed in the 1930s, that were used for both pocket watches and wristwatches. The calibre MB M16.31 is particularly beautiful thanks to its handcrafted traditional finishings such as Côtes de Genève, inner angles, circular graining and bevelling – all performed at the Montblanc Manufacture in Villeret. The Split Second mechanism in the centre brings even more light to the entire movement.

For this limited edition, the plates and bridges are made in Maillechort (German-silver) plated in 18 K gold harmoniously matching the 18 K Lime Gold case and the dial. The calibre has two column wheels for the chronograph and the split complication, horizontal coupling and a power reserve of 50 hours. Like its predecessor, it is composed of the same V-shape bridge (whose design was protected in 1912) and a large balance wheel with 18 screws beating at the traditional frequency of 2.5 Hz / 18,000 A/H.

The Montblanc 1858 Split Second Chronograph Limited Edition 18 is completed with a new vintage green nubuck alligator leather strap that has been finished with beige stitching to reinforce the vintage look. The strap is also fitted with a matching 18 K Lime Gold buckle for the perfect finishing touch.

The Montblanc Manufacture in Villeret is a very special place that possesses the know-how to produce a movement from A to Z, making all the main components in-house, such as the plates and bridges in Maillechort (German-silver) with traditional hand-crafted decoration. It also manufactures the full regulating organ in-house, including the hairspring. There are few places in the world of watchmaking quite like Villeret. From the basement where the raw bars of different metals are waiting to be tooled, to the top floors where the watchmakers assemble the movements and encase the timepieces.

Before the assembly stage, each component will pass by the manufacture’s traditional finishings workshop where Côtes de Genève, inner angles, circular graining, and bevelling is performed following traditional techniques that still use the stalks of the local gentian plant to give the final polishing touch.

Montblanc watchmaking is built on a unique set-up that brings two manufactures together, based in Le Locle and in Villeret, in the Swiss Jura mountains.

The Montblanc watchmaking story began in 1858 when Charles-Ivan Robert founded a watch workshop in the Saint-Imier valley. This marked the beginning of the historic Minerva era. By the end of the 19th century, their pocket watches started to gain recognition for their crown winding system. The Minerva Manufacture’s success resulted in the company becoming a leading specialist in professional watches (stopwatches & chronographs) for measuring small intervals of time with high precision during the 20th century.

Today, the Montblanc timepieces continue the journey of over 160 years of Minerva history in four fine watchmaking areas with Star Legacy, Heritage, TimeWalker and 1858 product lines, all linking the past and the present through design, style and technical innovation.