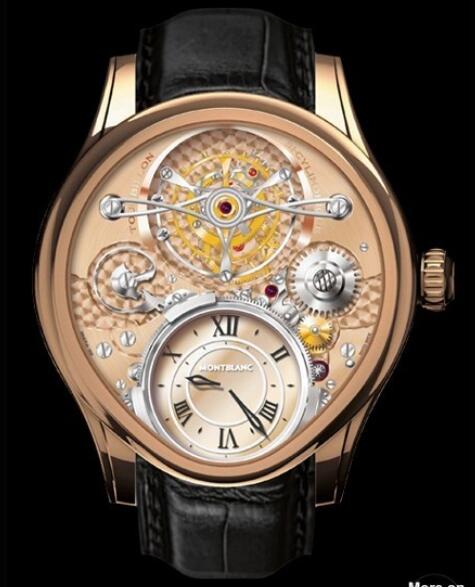 On Monday, January 17th at the Salon International de la Haute Horlogerie (SIHH) in Geneva, the new Tourbillon Bi-Cylindrique from the Montblanc Collection Villeret 1858 will be unveiled to the public and the international press.

With the new Montblanc Tourbillon Bi-Cylindrique, the Montblanc Collection Villeret 1858 again presents an exclusive innovation that differs in many respects from anything that modern haute horlogerie has created until today. Not only is this the first wristwatch with a tourbillon escapement and a cylindrical double balance-spring, the newcomer also delights connoisseurs by revealing the mechanisms and the mode of function of the legendary heures mystérieuses display. This new timepiece accordingly epitomizes the working philosophy cultivated at the Montblanc manufacture in Villeret, which grew from the manufacture Minerva, originally founded in 1858. Only very few watch manufactures can look back upon an uninterrupted history of comparable length. Throughout these years, the artisans in Villeret continued to work according to the tried-and-tested methods of the best Swiss watchmaking tradition. Their art is haute horlogerie, and it is primarily practiced by hand. Rare indeed are the master watchmakers who have achieved consummate expertise in the methods and working techniques which are indispensable for this outstanding and exclusive form of watchmaking. Bearing in mind this method of working and the manufacture’s extraordinarily extensive vertical range of production of balances and their spirally coiled springs, it goes without saying that only individual pieces and exceedingly small series can be crafted.

Constant innovation, which always searches for the new and the unprecedented, is another vital part of the Swiss watchmaking tradition. This is accordingly also an important aspect for the Montblanc manufacture in Villeret and it manifests itself once again in the new Tourbillon Bi-Cylindrique, for which master watchmaker Demetrio Cabiddu and his colleagues pursued a daring idea. Would it be possible to miniaturize and transplant the precisely beating “heart” of an 18th-century ship’s chronometer into a tourbillon rotating inside the case of a wristwatch’ This steadily beating heart is an escapement with a cylindrical balance-spring, thanks to which ship’s chronometers were able to tick so steadily and so precisely two centuries ago that, despite turbulent waves and extreme temperature variations, mariners could rely on them to navigate across entire oceans, erring by only a few nautical miles in their calculated positions.

The Cylindrical Balance-Spring as the Renaissance of a Great Achievement

The new Tourbillon Bi-Cylindrique earns new honors for an invention that had already set the pace in the world of timepieces centuries ago. The mechanism is a cylindrically shaped balance-spring: unlike the vast majority of contemporary balance-springs, this one doesn’t swing to and from in a single plane, but expands and contracts along a vertical axis as though its gyres were the threads around a bolt. Cylindrical balance-springs were invented toward the end of the 18th century and were installed by ingenious watchmakers such as John Arnold into marine chronometers whose precision and stable rates continue to evoke the admiration of watchmakers and scientists today. Like a conventional balance-spring, a cylindrical balance-spring is a concentrically wound strip of elastic metal; but instead of being wound side by side, at increasing distances from a common center and all on the same plane, its individual turns are all of equal diameter and are wound one atop the other. This eliminates the slight eccentricity of the center of gravity, which has always been the Achille’s heel of spirally coiled balance-springs. The second advantage of a cylindrical balance-spring is that it develops absolutely concentrically and symmetrically. “Development” in this context refers to a balance-spring’s “breathing,” which results from its tireless expansion and contraction. The concentricity and symmetry of these breaths are essential preconditions for its isochronism (i.e. the independence of the duration of the oscillations of the balance-spring from their amplitude) and they are thus also crucial to the regularity of the watch’s rate. The new Tourbillon Bi-Cylindrique in the Montblanc Collection Villeret 1858 ticks with two cylindrical balance-springs positioned concentrically one inside the other, each with its own diameter, but both with identical torque. The springs develop in opposite movements (i.e. one expands while the other contracts, and vice versa) while the torque remains the same, thus further optimizing the isochronism. The bi-cylindrical constellation used in this new timepiece was devised by the watch engineers at the Montblanc manufacture in Villeret and has never before been used in a wristwatch, to say nothing of its being mounted inside a tourbillon escapement.

Anticipating these fascinating new developments, the Montblanc manufacture in Villeret benefited from the ability to produce its own balance-springs. After intensive testing of the largely manually operated production facility and the metal alloy used for the wire from which balance-springs are made, specialists at the manufacture are now capable of performing every step – so to speak, from A to Z – that’s needed in order to manufacture cylindrical balance-springs. This is a degree of exclusiveness that one can seek in vain elsewhere, even at some of Montblanc’s most renowned competitors.

A Tourbillon Upholding the Highest Standards

As though the optimization of a balance-spring in a shape that had originally been developed for use in marine chronometers wasn’t enough, the master watchmakers in Villeret have mounted their new creation inside a tourbillon. A watch movement’s so-called “positional error” (i.e. rate disturbances in the vertical positions resulting from the eccentricity of the center of gravity) can also be caused by the slightest shifts in the balance’s center of gravity. The outstanding chronometric achievement of the tourbillon is that it compensates for this positional error by leading the slightly eccentric center of gravity along a circular orbit around the balance’s point of rotation once per predefined time interval. Another noteworthy detail in this particular construction are three weights, each adorned with an arrowhead, the emblem of the old brand Minerva, and moveably affixed to the circular arc of the tourbillon’s cage so that they can be shifted to perfectly poise the mechanism. The tourbillon is borne via a bridge shaped like two  horizontal and mutually overlapping figures-of-eight, which can also be interpreted as symbols of infinity. All steel components of the bridge and cage are milled from solid blocks of alloy and are then meticulously drawn, beveled and polished by hand. Only to complete these tasks for each tourbillon it requires more than three weeks’ time, without mentioning the requested outstanding craftsman skills which very few master watchmakers have cultivated to the requisite degree of perfection.

Unveiling the Secret of “Heures Mystérieuses”

Two years ago, the Montblanc manufacture launched its Grand Tourbillon heures mystérieuses display in which the hour-hand and minute-hand seem to float weightlessly above a mirrored plane. Now the Tourbillon Bi-Cylindrique solves this mystery by revealing the hidden mechanism, which has long been known among watch connoisseurs. The new wristwatch eliminates the cover that formerly concealed the mechanism which powers the paper-thin sapphire disks with their printed black hands. This unveiling is doubly attractive because aficionados can now admire both the fascinating floating time display and the cunningly designed mechanism that propels it.

A watch’s case rarely evolves into a veritable icon. One exception to this rule is the shape of the cases of the Grand Tourbillon watches in the Montblanc Collection Villeret 1858. Their most noticeable characteristics are a teardrop shape which tapers toward the “6 o’clock” position, a slightly cambered profile which cuddles comfortably close to the wrist, and a bezel with a concave cross-section from the “8” through the “12” to the “4,” where it transitions into a convex curvature from the “4” to the “8.” This description sounds complicated, and indeed it is, because scarcely any other contemporary wristwatch has a case whose design and construction place such exacting demands on case-makers as does the new Tourbillon Bi-Cylindrique. This case’s gentle curvature continues above the dial in a slightly overhanging sapphire crystal (forme chevée): the transparent glass, which has inner and outer surfaces that precisely conform to the case’s silhouette, offers an undistorted view of the movement. The new Montblanc Tourbillon Bi-Cylindrique will be available as a unique piece in platinum and in strictly limited series of eight wristwatches with 18 carat white gold cases and eight timepieces with 18 carat red gold cases.