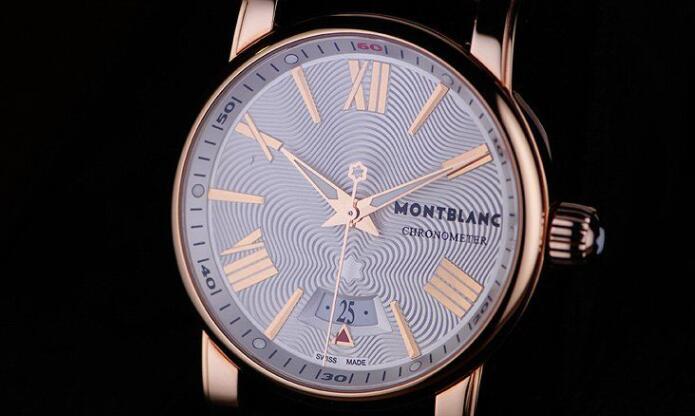 I have been spending a little time with the Montblanc Star 4810 Automatic lately, courtesy of Montblanc. I’m always game to try out a new watch and have been keeping tabs on Montblanc ever since Richemont acquired Minerva a few years ago. I should disclose that I am a fan of Minerva and went out of my way in 2005 to seek out their last production models under their own name.

The Montblanc Star 4810 Automatic is not equipped with a Minerva caliber, though; the movement is a version of the robust ETA 2892.
I did not perform exhaustive timing tests, but the COSC-certified movement held its ground and only gained 35 seconds in 14 days on a winder. Averaging about +2.5 seconds per day well qualifies the Star 4810 as a Chronometer piece.

The Star 4810 Automatic may not be targeted at movement aficionados, and at the price point, it’s clear that the compromises inherent in any product offering were made at the expense of the mechanics rather than the presentation.
The Star 4810 Automatic is a three-handed watch with analog date display of contemporary design. The employment of an arc to display the preceding and following dates serves more of an aesthetic than a utilitarian function and is very much a matter of personal preference.

The date switches quickly with an audible click just before midnight and employs Arabics on odd-numbered days only. The second hand hacks enabling accurate time-setting, and the crown has two settings – the first for setting the date (counterclockwise) and the second for the hands. Since the 4810 Automatic isn’t a perpetual or annual calendar, the date must be set manually in months that follow a month with less than 31 days.
The fairly large crown with mother-of-pearl signet is easy to grasp for comfortable adjustment. It takes about six to eight turns of the crown to start the movement from a dead stop. Although I did not perform an exacting test on the power reserve, it was still running thirty hours after I took it off the winder.

Water resistant to 30 meters, the 41.5mm case is of polished 18K rose gold with a slightly domed anti-reflective sapphire crystal. It appears to be of three-piece construction, with a screwed-in sapphire caseback attached by six screws.
The shape of the case is conventionally round with a flat bottom. The slightly elongated lugs that reach to the periphery of my wrist evoke a sizable presence, which is moderated by the hue of rose gold blending well with my skin tone.
While the case is fairly conventional, the same cannot be said of the silvered-coloured guilloche dialwith a wave-pattern emanating from the Montblanc siglet just above the arced date aperture at 6 o’clock. The guilloche seems to have a more dimensional appearance compared to similar dials I’ve seen, and the wave-pattern has a hypnotic effect, as shown in the below pictures.
The applied hour-indices appear to be gold plated, with matching gold hands, and the Montblanc symbol at the counterweight end of the sweep seconds hand is a deft touch. Montblanc Star 4810 Chronograph Automatic

The beveled rehaut is replete with printed minute markers at every ten minutes and tiny dots of lume at the interstitial five minute markers which cuts an aesthetic juxtaposition compared to the engraved dial.
I sense a blend of casual and formal design elements rather than a homogenous presentation. This lends a more fluid appearance but is also the source of a sense of ambiguity that is difficult to reconcile. I think it’s meant to be a dress watch, but there are divergent design elements that allow it to work well in a casual setting. It certainly isn’t meant to be a purely formal dress watch like a Calatrava, as it’s too fashionably large to pull that trick off. On the other hand, it’s not a purely casual watch, either, as the gold construction and flowery engraving provide it with an ornate appearance. I’m having a hard time pegging the Star 4810 into the usual descriptive categories, and perhaps that’s precisely what Montblanc intended.

Since this Star 4810 Automatic is a sample piece, I believe Montblanc decided to minimize costs by including a gold plated double-fold deployant rather than a solid 18kt rose gold deployant. In the below picture, “Stainless Steel” is clearly engraved on the rightmost section of the deployant, and I didn’t find the karat stamp anywhere on the case. However, Montblanc’s website states the Star 4810 comes with a “18kt red pin buckle”, so I presume the final production piece will utilize a matching solid 18kt buckle.
The strap is of good quality single-stitched brown alligator with square scales, however it is on the thin side compared to the bulk of the watch with minimal padding, and there is a noticeable gap with the case. The color and pattern matching were excellent, but I believe an extra millimeter of padding would have imbued the watch with a more substantial presence and be more in keeping with the nominal dimensions of the case.
Highlight of the wave pattern in the dial . . . with the Montblanc symbol on the counterweight directly above the same symbol on the dial as well as the red elements – date marker, 1st of the month, and 60 second marker on the rehaut.
What does it all add up to, you might ask. This is a difficult watch to peg down, and I’m not sure if there’s a definable audience the Star 4810 is addressing. It’s certainly not a sports watch, a pure dress watch, nor a casual watch; it’s not especially complicated mechanically, nor does the movement hold any special interest. It does have an ornate presentation that combined with its nominally large size offers a vivid presence that draws attention; I suppose that if that were the affect they were aiming at, then Montblanc succeeded.

In purely mechanical terms, the sample model offered very good timing performance, and it wouldn’t be a problem to have it serviced anywhere as the movement is fairly commonplace. Perhaps that’s what Montblanc had in mind when they created it – a target audience not oriented to horology so much as one where fashion combined with convenience is essential, and where the use of a mechanical movement is desirable more as a tribute to extrinsic ‘old school’ values rather than for intrinsic horological interest.